Governor Inslee has announced orders to force everyone in the state to wear a mask in public.

On Tuesday, Governor Inslee ordered everyone in Washington to wear facial coverings when in a public place, both indoors and outdoors. Because of this, those of us at Shift thought we would bring back our popular “Governor Zero” facemasks that quickly sold out when we offered them in May. They are 3-ply and 100% cotton. They are only $25 with proceeds going to support Shift and the COVID-19 response from the Northwest Republican Community Foundation which is supporting Hopelink as they assist our neighbors who have lost their wages. (As a reminder, Jay Inslee earned the moniker “Governor Zero” by spending more than $7 million during his failed presidential campaign to turn his initial 2% in public support into 0%.)   (Governor Inslee media release, Shift “Governor Zero” facemasks, and Northwest Republican Community Fund/Hopelink)

While Governor Inslee continues to push (with the assistance of media members who can’t be bothered to check facts) the false narrative that he cut state employee pay, new details reveal that state workers will actually make more money (paid for by taxpayers) due to the governor’s collusion with union leaders. Since the governor wants to allow a scheduled 3% pay raise to take place July 1, before he requires state union employees to take 6-to-8 unpaid furlough days, the workers’ annual salary will be almost identical to their current annual pay, while working 6-to-8 fewer days.

Now we find out that Inslee arranged the furloughs so the government workers are eligible to collect unemployment benefits for their furlough days.  And because of the weekly $600 federal unemployment benefit in the last COVID relief bill (the CARES Act) and because of the state’s Shared Work program (fully funded by the CARES Act), state workers will receive more taxpayer money than if Inslee just allowed the 3% pay raise to go forward without imposing the furlough days (see chart below from the Washington Federation of State Employees).  Remember, while private employers and employees have been severely financially impacted during the coronavirus outbreak, nearly all state employees received full wages and benefits.  Now we find out they will make more money and work 6-8 fewer days.  Greedy union bosses are laughing all the way to the bank as state workers are benefiting from the suffering of others. The one piece of good news is that since Inslee’s campaign contributors in the government unions are now eligible for unemployment claims, there might be an incentive for his Employment Security Department to clean up the thousands of backlogged applications of Washingtonians who have yet to receive their promised payments. (Washington Federation of State Employees and Seattle Times)

Liberal multi-millionaire Nick Hanauer pushes multiple false narratives to promote tax increases on those who have financially suffered during the coronavirus outbreak. First, he claims Washington does not tax its rich. The fact is, the state does tax the wealthy, it just does not do it in a manner Hanauer and other liberal extremists desire with a state income tax (because it is unconstitutional).  Second, Hanauer falsely claims that reducing state expenditures to offset the $8.8 revenue shortfall will be deep and painful. He, however, skipped over the fact that the current budget is 19% greater than the previous budget.  Thus, even with the significant drop in tax revenue, the state is still collecting 3.7% more in taxes and fees during this budget biennia than it did during the previous biennia.  Finally, Hanaeur also provides the false belief that only the top 1% would be subject to an income tax. The problem with pushing that lie is that people know that once a revenue stream is open, liberal politicians will continue to expand it so soon everyone earning a paycheck will be included. Reminder to Mr. Hanauer, no one is stopping you from sending your money to the state if you want to soften any reductions in state expenditures. (Seattle Times, Washington Policy Center, and Facebook)

Recent violence within the CHAZ is revealing the hypocrisy of those who want a police-free zone and a reduction in police services for the remainder of Seattle. Protest leaders complained about the length of time it took first responders to get to the three separate crime scenes in the CHAZ, which have left one person dead and three others injured.  Ironically, if the protesters had not forced the evacuation of the East Precinct, police officers would have arrived in seconds and detectives and CSI would have been able to quickly investigate the crime scene. As columnist Denny Westneat points out, the anti-police statements from the protestors and the recent violence reveal that the CHAZ “itself has become exhibit A for how much those (anti-police) slogans are a fantasy.” (Seattle Times)

Bellevue Police have made 23 arrests (and expect to make more) for the thefts and vandalism that took place at Bellevue Square on May 31st. Surveillance videos and images taken by members of the public have been used to identify the subjects.  Fortunately for Bellevue residents, they do not have Seattle City Attorney Pete Holmes in charge, as he has stated he will not prosecute many of the individuals who caused damage that same  weekend in downtown Seattle. (MyNorthwest and Seattle Times)

The City of Tacoma is forced to delay the enactment of a new tax on guns and ammunition until 2021, because it was unable to perform required steps before the original July 1st implementation date. Due to restrictions on public meetings because of the coronavirus outbreak, city officials were not able convene workgroups on the tax or hire a consultant to determine best practices to reduce gun violence. The Tacoma City Council had passed a $25 tax on firearms and a 2-5 cent tax on ammunition. Maybe they should call Nick Hanauer to see if he’ll cover the shortfall.  (News Tribune)

Snohomish County Sheriff Adam Fortney is asking the Washington State Supreme Court to review and throw out one of the two recall efforts against him. Fortney is requesting that the court review the findings of a San Juan County Superior Court judge which allowed a recall effort to proceed.  This recall is based on Fortney stating he would not arrest individuals who violated Governor Inslee’s Stay-at-Home orders and for rehiring previously fired officers. (Everett Herald)

Visual surveys of Yakima County residents show that there has been a significant increase in the number of people wearing masks. In late May, only 35% of people entering businesses were wearing masks. Yet surveys taken last weekend showed the percentage had increased to 65%.  The survey was conducted at 50 commercial sites around the county, with 3,500 individuals observed. (Yakima Herald)

The mayor of Springdale (population 300 in Stevens County) has been charged with identity theft and is being investigated for depositing city funds into her personal bank account. Mayor Elizabeth Calderwood, who won her position by one vote in 2017, is facing 67 counts of theft. It is believed approximately $12,000 in expenses are unexplained.  (Spokesman-Review)

In the Inslee for Governor campaigns’ latest fundraising email, the governor responds to President Donald Trumps’ recent statements about the situation in Washington by stating, “There is no leadership coming from the White House — none, zero, zip, nothing.”  This is coming from a governor whose idea of leadership is to shelter himself from the advice of elected legislative leaders, not respond to phone calls from mayors, disband bi-partisan committees in favor of advisory panels made up of campaign contributors and liberal special interest groups (some of whom ignored state health guidelines to re-open their casinos), and who famously stated, “This is news to me” when he was informed rioters had taken possession of 6 blocks in his state’s largest city. Yeah, Jay sure knows what a lack of leadership looks like  (Inslee Campaign fundraising email) 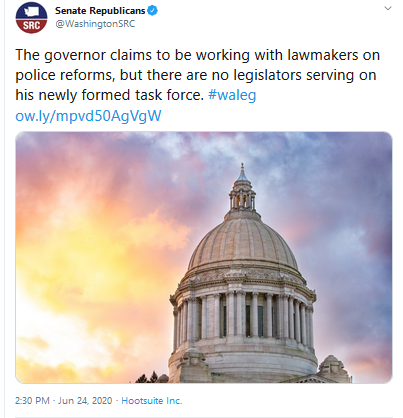 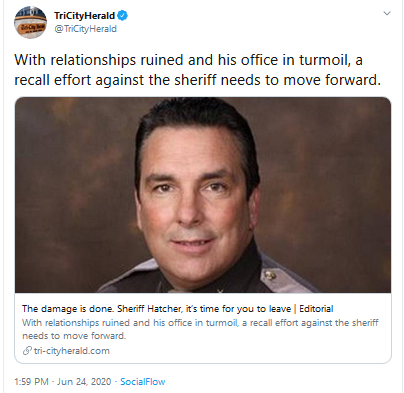 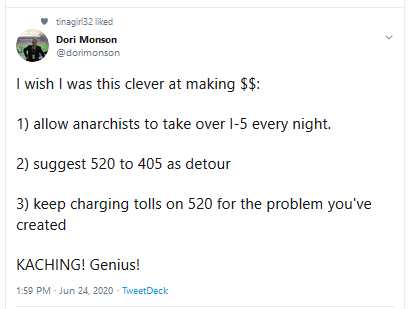