While thousands of Washington residents are stuck waiting for the unemployment payments due to them, Governor Inslee is stepping to the front of the pay line to get a non-merit based pay raise.

While tens of thousands of Washington State residents are forced to wait for their unemployment benefits, due to the multiple failures of Jay Inslee’s Employment Security Department (ESD), the governor will be receiving a $5,000+pay raise next week. Governor Inslee, who is already the 6th highest paid governor in the country, will now see his pay increase from $182,179 a year to $187,353.  No word from the financially challenged governor if he will follow the lead of Insurance Commissioner Mike Kreidler, who will donate his pay raise to the Thurston County Food Bank (which likely has more clients due to the failure of Inslee’s hand-picked team at the ESD). (WCCSEO, The Ladders, and News Tribune)

Governor Inslee shows why his pay raise is undeserved, punting on leading on police reform, and appointing a task force to make non-binding recommendations on policing.  As with nearly all “task-forces,” “blue ribbon panels,” and “advisory groups” commissioned by the governor, this group is dominated by liberal special interest groups and Inslee campaign donors. It is interesting to note that even though much of the current reform discussions involve urban police tactics, there is no representation from any of the larger urban police departments on the task force. In order to not upset his far-Left base, who are demanding defunding and other radical changes to policing, or a general public which is weary of drastic law enforcement modifications, the timeline for this task force’s recommendations is sometime this fall (i.e. after the November elections). (News Tribune)

The Washington Farm Bureau (WFB) continues to battle some state regulations established to stop the spread of the coronavirus. WFB officials are concerned that some of the regulations established by the state’s Department of Labor and Industry run counter to other state and federal restrictions. For example, the state is requiring all farm workers to wear masks, yet the Center for Disease Control says workers should not wear masks in hot weather. (Washington AG Network)

Another shooting in the CHAZ occurred Tuesday morning. Yet another reminder that when spineless elected officials (we’re looking at you, Jenny and Jay) allow protestors and looters to create a  space where no police are allowed, you are going to attract even more of those who do not want to be around police. This is the fourth person shot in the 6-block area in just four days. (Seattle Times)

Seattle Mayor Jenny Durkan said on Monday that police will return to the East Precinct, yet she did not provide a timeline for when this will occur. Durkan also said they hope to convince people to leave the area at night by providing more “resources” for homeless individuals and by “working with community groups” (i.e. giving them money) to convince people to leave at night.  One has to wonder how much these protests are costing the city and how much longer Seattle taxpayers will be willing to pay, knowing that the city will likely cave in to the demands of less police protection and an even less friendly business environment. Wonder if the Mayor will step forward to take credit for driving away jobs and business tax revenues. (Seattle Times)

The heightened anti-employer and anti-taxpayer attitude in Seattle is increasing the departure rate of businesses.  The billion-dollar investment group Smead Capital Management is among the next wave of employers who are taking their jobs and tax revenues out of Seattle. While Smead’s departure received some media coverage, we will never know the number of companies who have chosen not to move into the city, or the number of conventions, business meetings, or tourists who are no longer considering coming to Seattle and will spend their money elsewhere.  (MyNorthwest)

An audit of Sound Transit found that the transit agency spent more than $100 million taxpayer dollars to fix mistakes they could have avoided. The Washington State Auditor’s Office concluded that Sound Transit should have done a better job in both designing projects and in outlining contract terms with vendors. It sure is nice (for them) that no one in the massive Sound Transit bureaucracy will actually be held accountable for the wasting of taxpayer money. Washington Policy Center)

Tim Eyman decided not to fight a decision by the Snohomish County Auditor, and submitted a revised version of his voters’ guide statement. Last week, Eyman called it censorship when Snohomish County Auditor Garth Fell announced he would not include the candidate’s statement in the county’s voter pamphlet because it violated restrictions by mentioning his opponent’s name.  Eyman said he was submitting the revised version “under protest.” (Everett Herald)

A government mandated increase in the minimum wage, other tax increases, and the homeless drug culture have led the owners of Bartolino’s Espresso to close their business. The Tacoma business had been in operation for nearly 25 years. The owners were hoping to sell the business, but the COVID-19 outbreak eliminated remaining profits and any possibility of finding a new owner. (News Tribune)

The debate over the effectiveness of masks continues, as Yakima County residents are being told to wear them any time they leave their homes to help stop the spread of the coronavirus. With the Central Washington community continuing to experience an increase in cases, state and local orders are requiring all people to wear masks in public. Some people are hesitant to wear the masks, for they feel they are not effective in stopping the proliferation of the disease. Yet health officials believe that wearing a mask properly (i.e. tight fit over both mouth and nose), adhering to social distancing guidelines, and washing hands regularly are effective methods in reducing the number of infected people. (Yakima Herald)

The Benton County Deputy Sheriff’s Guild voted unanimously to recall Sheriff Jerry Hatcher. In a statement, the guild contends Sheriff Hatcher is unfit for the job and that he has “committed acts that were either malfeasance, misfeasance, and/or a violation of his oath of office.” Hatcher was first elected in 2017 and is up for re-election in 2021. (YakTriNews)

Eastern Washington University’s Board of Trustees continue to support College President Mary Cullinan despite an overwhelming majority (35-2) of faculty leaders supporting a no-confidence vote. The university is facing severe financial difficulties due to a drop in enrollment and a reduction in state funding due to the coronavirus outbreak. (iFIBER One)

The Yakima City Council has nominated four candidates and one alternate to be interviewed to become the city’s permanent city manager. The position has been filled by temporary office holders since last summer, as the city grapples with whether to incorporate a “strong” and elected mayor form of government. (Yakima Herald) 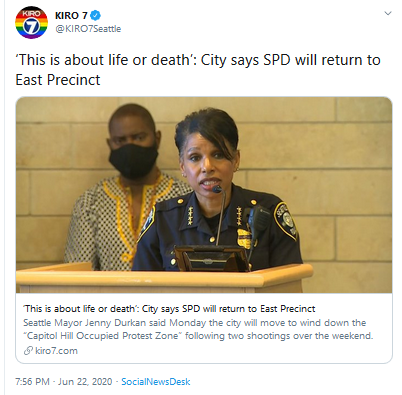 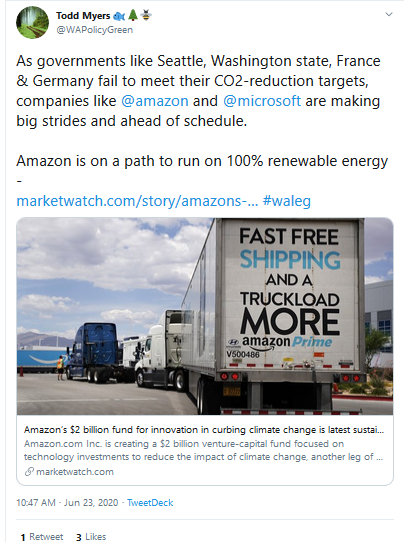