Governor Inslee is attempting to spin the 3% pay raise he is giving state workers even as our economy goes into recession.

Governor Jay Inslee continues to spin the narrative that state unionized employees will be “sacrificing” by getting a second pay raise in a year, and then taking 6-8 furlough days in the coming months. The governor did not want to offend some of his biggest campaign donors, so he is allowing a 3% pay raise to go forward July 1 (on top of a 3% pay raise given last year) and thus the “sacrifice” is not as substantive as he is portraying.  Inslee’s plan is for unionized state employees to take off 6-to-8 unpaid days during the next few months (after their July 1st pay increase kicks in), which will reduce the individual state workers’ annual salary impact on the budget by approximately 3%.  Thus, by Governor Inslee allowing the 3% pay increase to occur, the state employees are “sacrificing” by making approximately the same amount as they did last year, while working 6 to 8 fewer days. But remember, Jay Inslee was an economics major in college, so this all works out (except for taxpayers). (Governor Inslee media release)

While Republican legislators continue to call for an immediate special session to confront the $8.8 revenue shortfall looming in the state budget, Governor Inslee and Democrat lawmakers continue to avoid making necessary decisions.  Governor Inslee, like virtually every other Democrat official, has also stated that he is not ruling out new taxes on Washington State residents.  It should be noted that even with the predicted reduction in tax revenues, the state is still projected to collect 3.7% more in taxes throughout the current 2019-2021 biennia than it did during the last two-year budget period. Current state government spending is a record-breaking 19% larger than the previous budget. (KING5 News, Dann Mead Smith Facebook post, and Washington Policy Center Blog)

Governor Inslee’s Department of Health (DOH) finally admitted that it has been categorizing some deaths as being caused by the coronavirus which had nothing to do with the disease.  DOH had been including as a COVID death any fatality where the virus was present, even if the person died of other causes (i.e. gunshot wounds, suicide, car accident, etc.). When the state’s Freedom Foundation had first mentioned this fact in May, Governor Inslee attempted to mislead the public by labeling this accurate information as “disgusting” and “malarkey” and that the foundation had been “fanning these conspiracy claims from the planet Pluto.”  Amazingly, in the DOH materials released announcing the correction of its faulty methods, there is no inclusion of an apology from Governor Inslee for his insulting comments. (Freedom Foundation and DOH Fact Sheet)

Governor Inslee’s Department of Health (DOH) also announced that it had been incorrectly calculating the percentage of deaths of those who had been infected with the disease.  The DOH deflated the percentage of deaths from the actual rate of 6.2% down to 5.5%, by including those who had already survived the virus into the calculations.  As with the scandal within the Employment Security Department, Governor Inslee was nowhere to be found to take responsibility for the mistakes of his administration during the announcement of the faulty actions of the Department of Health. (News Tribune)

In a divisive vote, the Martin Luther King, Jr. County Labor Council voted to expel the Seattle Police Officers Guild from its ranks, over the belief the department is institutionally racist.  Over 80,000 votes were cast, with 55% of the delegates voting to remove the police officers from the council’s roster.  While some union members said the guild did not start taking racist concerns seriously until expulsion from the council was being discussed, others defended police officers by saying they were being singled out for a societal problem. (Seattle Times)

Portland city officials were able to stop the creation of an “autonomous zone” within their city limits Wednesday evening.  Portland Mayor Tom Wheeler (whose residence is near the protestors’ activities) said, ““I do not want an autonomous zone set up in Portland.  I’m watching what’s happening in Seattle, and I’m not impressed. I think it’s a distraction from the larger movement, and the movement is justice for black people.” That’s right, even Portland is embarrassed by what’s going on in Seattle. (MyNorthwest)

The Snohomish County Auditor has informed gubernatorial candidate Tim Eyman that he will need to edit more than half of his voter pamphlet statement to adhere to the county’s guidelines of not mentioning an opponent.  Eyman, who recently won a similar dispute with Kitsap County over his inclusion of Governor inslee in his statement, calls the county’s decision “blatant government censorship” and stated that his campaign will appeal the decision. (Everett Herald)

Both the number of daily passengers and daily take-offs and landings are slightly increasing at SeaTac International Airport.  The figures are moving in a positive direction, even though both are far lower than pre-COVID-19 levels.  SeaTac served 10,600 customers a day last week, which is slightly more than 20% of the passengers who used the airport in February, and there was an average of 560 take-offs and landings last week, which is almost half the number of flights prior to the coronavirus outbreak. These figures are a significant increase from April, which saw an average of only 2,600 passengers a day and slightly more than 300 daily flights. (Seattle Times)

Like a script for the TV show “Veep,” an article details the dysfunction and unique characters that are embroiled in the current controversy within the Spokane Democrat Party.  With charges of racism, transphobia, and bigotry being hurled against the party organization’s leaders, and an unorthodoz investigation being “conducted” by Washington State Democrat Party Chair Tina Podlodowski, the entire county party leadership team performed a mass resignation of their offices.  After bringing the party organization out of a financial crisis due to numerous Public Disclosure Commission violations, County Chairman Ed Wood became the center of a controversy over the direction of the organization.  While Wood said he wanted the party to focus on winning elections, others were more concerned about racial and sexual identification issues. Heated arguments, procedural maneuvering, and grievances have dominated the county party’s activities for the past year.  (Inlander)

Selah’s mayor and a councilmember defended the city administrator’s right to call Black Lives Matter a “neo-Marxist organization.” Mayor Sherry Raymond stated City Administrator Don Wayman “continues to have my full support as our city administrator. His personal political views are his own. He is entitled to his opinions, no different than how each rally attendee is entitled to his or her own opinions.” City Councilmember Kevin Wickenhagen believed Wayman’s descriptions were justified and an accurate description of the organization. (Yakima Herald) 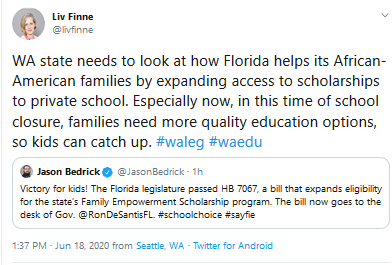 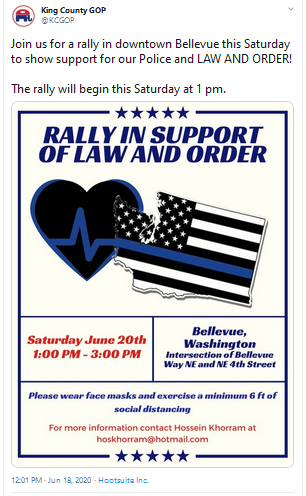