Bad news for Governor Inslee regarding his polling numbers in Washington State.

The new Crosscut/Elway Poll has terrible numbers for Governor Jay Inslee.  In a poll of 405 Washington voters, 40% have a positive impression of the two-term incumbent while 57% have a negative attitude about the often-absent Governor.  Added bad news for Inslee is that the poll was skewed to Democrat voters with the polling sample composed of 42% self-identified Democrats, 24% Republicans and 32% Independents.  The only place where Inslee received positive numbers is in (surprise, surprise) King County where his favorable/unfavorable rating is 62%/37%.  In the rest of the state, Inslee’s favorable rating is only 31% while his unfavorable rating is an incredible 64%.  Now we know why Inslee spends so much of his time campaigning against President Trump instead of campaigning on his record. (Crosscut/Elway Poll)

In the same Crosscut/Elway Poll, there is bad news for how the Democrats are handling the region’s homelessness crisis.  The liberal solution of throwing money at the problem and increasing the size of government, does not appear to be solving the issue according to Washington voters.  The poll reveals that the homelessness is the top issue for 31% of the state’s residents.  This is up from 21% last year and just 5% in 2017. (Crosscut)

Both Democrat and Republican legislators are doubtful that Governor Inslee’s homelessness legislation will pass during the upcoming legislative session.  Inslee has proposed stealing more than $300 million from the state’s rainy-day fund to fund more big government homelessness “solutions.”  Inslee made the claim that this will reduce the state’s homeless population in half (even though the Puget Sound region annually spends over a billion dollars a year on homelessness and has only reduced the numbers by 3%). (iFIBER One)

Federal Way City Councilmember Martin Moore will run for one of the two House seats in the 30th Legislative District.  Moore said he is an “Independent/Republican” and did not declare which House position he will be seeking.  One of the House seats will be vacated by Democrat Mike Pellicciotti who is running for state treasurer, while fellow Democrat Kristine Reeves did the right thing and resigned from the other seat to run for Congress. (Federal Way Mirror)

Charging electric cars during off-peak hours will be essential for utilities to handle the increase in power demands.  Many drivers charge their vehicles upon returning home in the evening.  This is already a peak time for energy usage and increasing the number of electric cars during this time period will overload many utility systems. (PEW)

In the latest example of environmental virtue signaling by a liberal politician, Mayor Jenny Durkan announced that all City of Seattle owned buildings will become powered by “clean electric systems.” Durkan’s Executive Order did not include how much this program will cost the taxpayers or provide a date when this will be accomplished.  Like nearly all environmental proclamations from liberal politicians, we fully expect this effort will be very expensive and fail to meet the publicly stated goals.  (Seattle Times)

Despite spending millions of taxpayers’ dollars on studies and “band-aid” measures, the recent events at People’s Park demonstrate that the City of Tacoma does not have a workable plan to deal with homelessness.  It took months for the city to begin clearing the park.  News Tribune columnist Matt Driscoll believes this demonstrates “the city currently has no clear, cogent vision for what it’s trying to do or how it will actually get there,” on the homelessness issue. (News Tribune).

A Seattle police officer is suing the city due to health problems he believes were caused by toxic chemicals he was exposed to while cleaning up a homeless encampment.  Timothy Gifford says the city was aware of the chemicals and the harmful impact they might have on workers. (Seattle Times)

In determining Spokane’s next steps with its downtown neighborhood, a new plan is being developed.  In the past couple of decades, Spokane has used long-range plans to revitalize its downtown core.  Currently a Seattle consulting group is taking surveys and holding focus groups to obtain citizens’ opinions.  As opposed to previous plans, homelessness strategies will be incorporated into future developments. (Inlander) 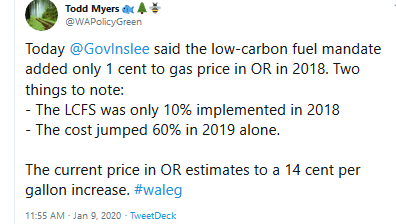