To pay back tribes for their strong financial support of Democrat campaigns (like his own) and liberal organizations (that support him), Governor Jay Inslee is pushing legislation to give them state funds.  Inslee wants the legislature to give him the authority to give the Tulalip Tribes 50% of sales tax revenues collected from non-tribal businesses at Quil Ceda Village shopping center.  Imagine the outrage if a governor proposed giving Kemper Freeman 50% of the sales tax revenue collected at Bellevue Square. (Cornfield Report)

Regulatory delays from Inslee’s Department of Ecology (DOE) are the reasons why Phillips 66 announced last week it was canceling the construction of a job-creating renewable diesel facility in Whatcom County.  The company described tactics similar to those DOE is also using with the Kalama methanol facility, and the bureaucratic delays are costing local communities hundreds of jobs and millions of dollars in tax revenue.  These job-killing delays are conducted to boost Governor Inslee’s environmental portfolio so he can selfishly obtain a job for himself (he hopes) in a future Democrat president’s administration. (Lynden Tribune and Senate Democrat caucus)

Department of Transportation road crews used to concentrate on highway “beautification” projects, but today they focus on cleaning up tons of garbage created by homeless encampments.  A spokesperson says $3 million in the department’s budget is currently set aside for “homeless cleanup.” Now that’s a liberal job-creation program! (KIRO)

In just three weeks, Washington’s new family leave program is already overbudget and behind schedule.  22,000 people have applied for the weekly payout since the program began January 1st.  State bureaucrats had projected they would receive that number of applications in the first three months, not first three weeks. Because the Inslee Administration failed to correctly estimate the caseloads, payment delays will occur. Guess they should have known that when you promise free stuff, people will sign up fast. (AP)

A leader of a liberal special interest group attempts to portray Amazon as an “abusive boyfriend” simply because the company has stood up to the crazies in Seattle government.  If we use writer Katie Wilson’s silly analogy, and honestly analyze the dysfunctional relationship, isn’t the Seattle City Council the “abusive partner” here?  First the council blames Amazon for the homeless problem the city has created (development and landlord regulations that reduce affordable housing, and a criminal justice policy that enables a drug/crime/homeless culture).  Amazon has arguably done more to help homeless individuals with its support for Mary’s Place and other effective charities than the city has with its expensive homeless programs that selfishly increase government employee headcount (the city council giving money to their “enablers”, i.e. government unions). Then, even though Amazon and its employees pay millions (maybe billions) in local taxes, the city thinks it deserves all the money Amazon earns.  The abusive partner (city council) keeps saying that if we just give them a little more money, things will get better. Yet they keep coming back demanding more money.  Finally, the abuser (city council) now wants to punish Amazon for standing up for itself.  The Seattle City Council is the real abusive partner here.  (BTW – we won’t attack Wilson for her sexist stereotype that only men are abusive in relationships.) (Crosscut)

Predictably, the Seattle City Council is attempting to find a scapegoat instead of fixing the criminal culture which led to the recent mass shooting.  Members of the city council focused their efforts on computer programed aps that automatically increased fares as people were attempting to escape downtown after the shooting.  Apparently councilmembers believe they are empowered to force private-sector Uber/Lyft drivers to risk their own lives to go the scenes of a mass shooting, after public-sector transit officials had stopped serving the area, at a price the city council determines. (Seattle Times)

Sex trafficking is also associated with the homeless culture which liberal policies have created.  At a recent forum in Federal Way, victims who were homeless spoke how they were promised shelter, food, clothes, and drugs in return for sex. (Bellevue Reporter)

Leaflets around the University District reveal there is a “Seattle Drug User’s Union.”  The flyers indicate members are “Proud to be a drug user” and they are seeking ways to decriminalize their drug use.  The union members meet the first Thursday of each month at a needle exchange location. (MyNorthwest)

Reports are circulating that the name of Seattle’s new National Hockey League team might be the Seattle Kracken.  For those who are unfamiliar, a “kracken” is a giant octopus-like creature from Scandinavian folklore (and Pirates of the Caribbean movies). (MyNorthwest Sports)

500 pages of documents from the investigation of Rep. Matt Shae were publicly released. According to the Spokesman Review, the documents disclose that the Spokane Valley legislator wanted to reveal the federal government as tyrants. (Spokesman Review)

The Washington’s Utilities and Transportation Commission announced that it has approved rate increases for both passengers and freight on the Lake Chelan ferry.  Depending on destination, passengers will see a $2.50 – $4.00 fare increase.  The ferry services travels from the City of Lake Chelan to Stehekin and carries 55,000 passengers a year. (iFIBER One) 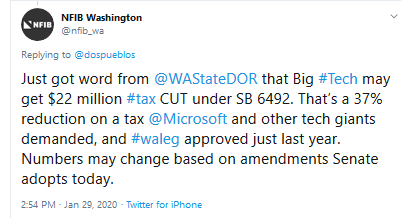