Legislative Democrats continue to burn money like there will never be another downturn in the economy.

Republicans offer ways to benefit the taxpayers with the revenue created from eliminating Boeing’s tax preferences.  It is estimated the state will receive $363 million over the next three years due to ending a Business & Occupation tax break which mainly benefits Boeing. Representative Drew Stokesbary (R-Auburn) will propose legislation to use the new revenue to fund a portion of the state’s currently unfunded pension obligations. Stokesbary states this will save the taxpayers money in the future.  Senator Doug Ericksen (R- Ferndale) has suggested a proposal to create jobs, by reducing all B&O taxes to the level Boeing was paying. (Seattle Times)

Legislative Republicans warn that the Democrats’ proposed budgets will force substantial cuts in state services in the next recession.  State expenditures have grown 20% as the result of Democrat out-of-control spending in the current two-year budget cycle.  Senator John Braun (R-Centralia) said, “Our colleagues on the other side of the aisle in the Senate talk about ‘putting people first.’ I always say this (Democrats’ budget) is about ‘putting government first.’ We are growing the state government at twice the rate of people’s personal income. That’s just wrong. We shouldn’t do that.” (News Tribune)

Democrats want to waste even more money studying a possible state bank.  The legislators have rejected the advice of the State Treasurer, and ignored multiple studies which each recommend against the state operating a financial institution, and are now planning to spend another $250,000 to study the issue.  Why are the Democrats stubbornly pushing this terrible idea?  Because government employee unions and other liberal special interest groups would financially benefit at the expense of the state taxpayers. (Most state bank proposals have the board dominated by union bosses, environmental leaders, and social justice advocates.) The Democrats will keep wasting state money on studies until one (written by their consultants) says a state bank is a good idea. (Washington Policy Center)

Despite opposing the legislation, Seattle Mayor Jenny Durkan allowed the banning of winter evictions to become law without her signature, since she knew the city council had the votes to override a possible veto.    The mayor warns that the legislation will likely cause a costly lawsuit from landlords and fewer units available to renters, but decided against showing some backbone and vetoing the far-left dream.  The mayor did use the opportunity to throw even more taxpayer money at the region’s homeless problem by dedicated $200,000 to “eviction prevention.”  The Puget Sound region spends well over a billion dollars a year on the homeless/drug/crime problem (and it will be even more with additional state money being approved in Olympia).  The problem is not the lack of money being spent on this issue, much of it going to increase the size of government.  Maybe the problem is government policies which have restricted home construction, and other policies which have created an environment of ignoring the substance addiction which causes much of the homelessness and crime. (Seattle Times)

Recent teachers’ union contracts have caused a $13.4 million deficit for the Puyallup School District.  Along with dipping into the district’s financial reserves, the school board has chosen to lay off eight individuals and reduce pay of other administrators to meet its financial obligations.  School Board President Kathy Yang fails to acknowledge that the unsustainable double-digit pay raises given to the teachers following their illegal 2018 strike are the reason for the problems.  Instead Yang blames the state funding mechanism for the district’s inability to manage its budget (a strategy to obtain more state funds in the future, instead of properly managing taxpayer money). (News Tribune)

Snohomish County has set a 2045 target for 100% of its operations to be powered by clean and renewable energy.  Snohomish County made this decision last year despite many other government entities (including Washington State, King County, and the City of Seattle) dramatically failing to meet clean energy goals they have set, even though they all sent out many press releases praising their courage.  Much of the energy that currently powers Snohomish County is already clean and renewable, since it comes from hydroelectric dams (like the ones which Governor Jay Inslee needlessly wants to tear down on the Snake River).  (Everett Herald)

Douglas County accidentally mailed duplicate ballots in many envelopes for the upcoming presidential primary.  Voters are instructed to return just one ballot and tear up the other one.  If two ballots are returned in an envelope there is the likelihood that the county’s canvassing board will disallow both ballots. (iFIBER One)

The agriculture business is changing as the food market continues to evolve.  Large food suppliers are losing to market shares as smaller companies are better able to service the growing “niche markets.”  (Washington AG News)

The liberal extremists at FUSE have released the “Progressive Election Guide” for the upcoming March 10th presidential primary.  Even though the group acknowledges that there are eight candidates still in the race, FUSE only provides space for six of them.  Failing to be mentioned are Hawaii Representative Tulsi Gabbard and California billionaire Tom Steyer.  It is interesting to see FUSE snub Steyer, who has spent some of  his millions over the last decade in Washington State (obtained from corporate profits by investing in the fossil fuel companies he now dislikes) on extreme left-wing groups like FUSE. (FUSE Election Guide) 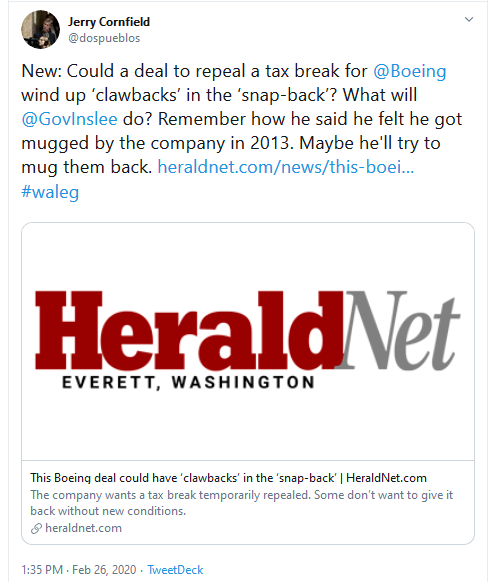 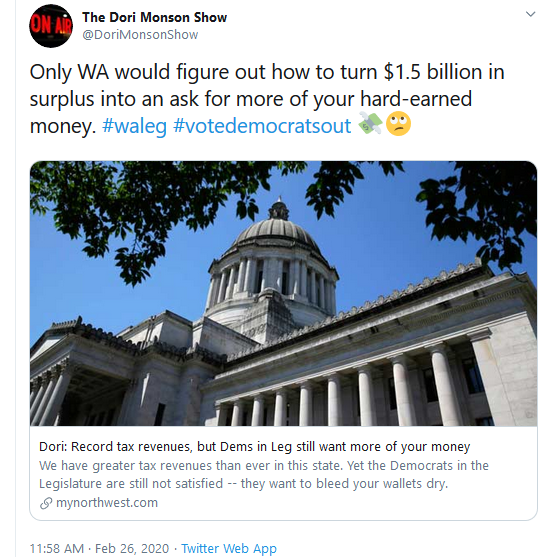