Marilyn Strickland is copying Pramila Jayapal by running in a congressional district where she does not reside.

Democrats in Olympia have revealed their budgets in both the House and Senate, and both are using the one-time surplus in new revenue to pay for projects their special-interest supporters want and which will need to be funded again in the future, but currently have no revenue source.  Meanwhile, Republicans have called for using the revenue windfall to actually give money back to people who pay taxes.  The Democrats did offer one tax break – to remove the tax from feminine hygiene products. (AP/Everett Herald)

While Democrat lawmakers are busy making long-term financial commitments with one-time financial windfalls, many people are wishing the state would save some of the unexpected money for a rainy day. The Walla Walla Union Bulletin echoes the sentiment shared by many Washington taxpayers when they say, “The prudent approach is to bank any extra revenue in case the current hot economy suddenly slows.”  Being “prudent” with money has never been a claim Washington Democrats could make (look at Governor Inslee taking $7 million in political donations to lower his public support from 1% to 0% in his failed presidential campaign).  But after last year raising a billion dollars in new taxes, some were hoping someone in the Democrat caucus would show some respect for the taxpayers and put this new revenue in the bank. (Walla Walla Union Bulletin)

Washington Secretary of State Kim Wyman says she will not vote in the upcoming presidential primary due to partisan declarations.  As the state’s top election official, Wyman wants to preserve her neutrality.  This follows the precedent Wyman has built to keep the Secretary of State’s office above partisan battles.  This is the exact opposite of how the top Democrat contender for the position views the Secretary of State’s office.  Far Left Democrat Representative Gail Tarleton (D-Seattle) has already demonstrated that she wants to be very partisan if she becomes the state’s top election official, by sponsoring the bill (HB 2529) that would have eliminated odd-numbered year initiative elections. This bill (now dead in Olympia) strongly favored the Democrats, since many liberals can’t be bothered to vote in odd-numbered years.  (Seattle Times and Washington Legislature Bill Summary)

Washington state is handing out free money and government officials are surprised people are signing up for it. The state’s new family and medical leave program has over 4 times as many applicants (30,000) as Democrat lawmakers expected.  Because of the overwhelming demand for receiving up to $1,000 a month from government, the bureaucracy has fallen seriously behind in enrolling applicants and mailing out the checks. (MyNorthwest)

It is costing the City of Seattle Police Department a lot of extra money to replace the officers who have left the force due to the strongly held belief that public safety – and the people who protect us – are not priorities for Seattle elected officials. In order to replace officers leaving service, the city must pay high salaries and bonuses to attract both experienced and new officers to the department’s ranks. The city is also spending thousands on a billboard campaign to attract candidates.  This is part of a $1.2 million expense the city must pay because a couple of councilmembers have been disrespectful of the people protecting the public. (Seattle Times)

There is much anticipation over a federal study on the Snake River dams that is to be released on Friday.  The study will make a recommendation as to the next course of actions for the dams – whether they should be breeched, their activities altered, or keeping things the same.  This study was ordered by a federal judge in 2016 and is being written by the Army Corps of Engineers, the Bonneville Power Administration, and the U.S. Bureau of Reclamation. (Everett Herald)

In fulfilling one of her major campaign promises, new Spokane Mayor Nadine Woodward announced the location of the new downtown police precinct.  The station will be located at the former Umpqua Bank location on Riverside Drive near the transit center.  Woodward stated that the precinct was needed to make the downtown core safer and thus more attractive for people to visit. (The Inlander)

Marilyn Strickland is a candidate for the open seat in the 10th Congressional District – but she doesn’t live there.  Technically that is allowed (heck, Pramila Jayapal didn’t live in the 7th Congressional District when she was first elected to replace Jim McDermott in D.C.), but it does bother many voters.  The News Tribune even took the former Tacoma Mayor to task for not living in the same district as those she hopes to represent.  Given this problem, it does seem strange that Strickland would blast out emails touting an endorsement from another person who doesn’t reside in the 10th.  Strickland is touting the endorsement of environmentalist Gene Duvernoy, who lives in King County (the 10th CD covers parts of Mason, Pierce, and Thurston counties).  (Strickland email and News Tribune) 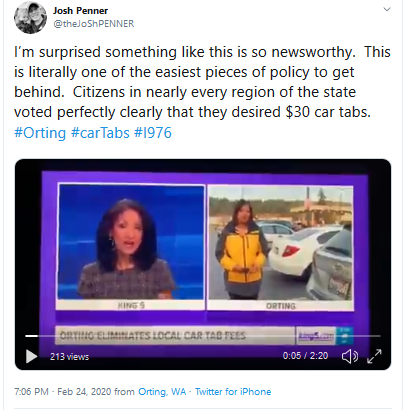 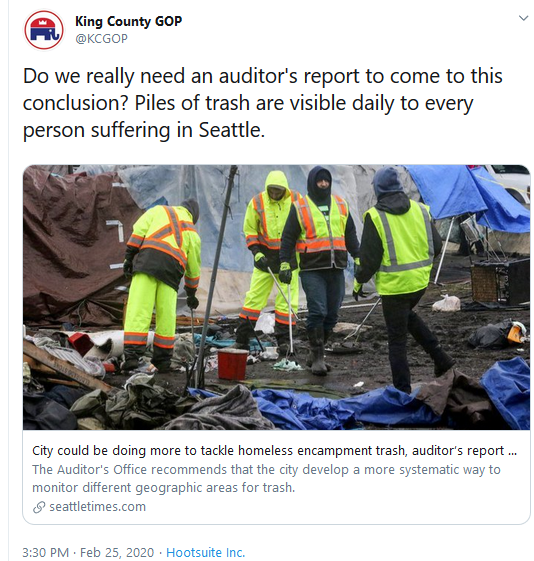