After new forecasts show there will be over $600 million in new state revenue, Democrats earmark money for government programs instead of providing needed relief to taxpayers.

Due to a robust national economy, and the unexpected receipt of estate tax revenue, Washington state revenues will increase over $600 million dollars during the current two-year budget cycle.  The Economic and Revenue Forecast Council came out with this good news earlier today.  Democrats immediately dedicated the additional money to government programs, and even keep pushing for new taxes, while Republican legislators called for providing a tax cut for Washington residents. Gee, which option would you prefer? (News Tribune)

While Bernie Sanders often plays down the real agenda behind his bid for the presidency, his true aims were revealed when he invited fellow Socialist/Troskyite Seattle City Councilmember Kshama Sawant to speak at his Tacoma rally.  As Sanders’ followers roared their approval, Sawant called for the end of free enterprise.  Sawant ignorantly proclaimed, “we need a powerful socialist movement to end all capitalist oppression and exploitation.” As Sawant is calling for a major overhaul of the American economic system (including the government takeover of all banks), she is ignoring the fact that her soialist philosophy  has brought economic hardship and government domination everywhere it has been tried, while free- nterprise has created nearly all productive innovations and recently lifted billions out of poverty in developing countries.  Why aren’t the leaders of the state Democrat party (Jay Inslee, Bob Ferguson, Patty Murray, and Maria Cantwell) being called out to condemn this extreme and dangerous philosophy of Sawant and Sanders???  (KUOW and The Daily Caller)

Government regulations are causing a childcare crisis in Washington as the state is making it difficult for childcare providers to keep their businesses open.  One owner/operator said, “The new (regulations in the Washington Administrative Code) have caused the most hardship for childcare.  Until they step up and admit it’s their crisis, nothing is going to change.” (Daily World)

In order to avoid new European tariffs, Boeing has asked Washington legislators to remove many of the tax breaks it had previously received from the state.  Boeing, 16 years ago, received a 40% reduction in Washington’s B&O tax, which saved the company hundreds of millions of dollars annually (an estimated $230 in 2018) and helped it compete against Airbus, which was underwritten by EU countries.  As expected, Democrat lawmakers jumped at the chance to introduce legislation that will bring more money into the state coffers. (Seattle Times)

The Democrat Snohomish County Executive is taking money that was designated to help those with mental and chemical dependency issues, so he can help pay for his political ally’s high-paying government job.  Executive Dave Somers has taken funds from the Chemical Dependency and Mental Health sales tax to pay for the controversial hiring of recently defeated Sherriff Ty Trenary.  Somers hired his longtime friend Trenary to a $148,100 job which partially oversees programs run by the current Sheriff Adam Fortney, who easily defeated Trenary last November. Does Somers have no respect for his county’s voters?  (MyNorthwest)

The Seattle City Council passed legislation that allows for the creation of 40 homeless encampments in the city – because they have no other solutions to the homeless problem that their liberal policies have created.  The encampments can be formed on properties owned by religious organizations, Washington State, and King County and are now allowed in residential neighborhoods.  The legislation also allows the encampments to operate indefinitely.  The legislation does not provide a way to pay for these sites.  Thus, we can expect the council to soon impose a new tax to pay for these encampments. (Seattle Times)

The Washington House of Representatives passed a bill that requires beef retailers to post signs stating whether they are selling “U.S.A. Beef” or “Imported Beef.” The bill (HB 2712), sponsored by Representative Joel Kretz (R-Wauconda), restricts only beef born, raised, and processed in America to be labeled as “U.S.A, Beef.”  The bill passed the House on a 92-6 vote and will now go to the Senate.  (Washington AG Network and Washington Legislature Bill Summary)

A Wilbur farmer has invited presidential candidate Mike Bloomberg to come to her farm to learn that modern farming is not as simple as he has stated.  During a 2016 presentation at Oxford University, Bloomberg said, “I could teach anybody… to be a farmer. It’s a process. You dig a hole, you put a seed in, you put dirt on top, add water, up comes the corn.”  Farm owner and operator Alison Viebrock-Steveson invited Bloomberg to her farm and said, “I think you have absolutely zero clue what farmers do and the impact we have on local, state, national ,and international economies. I think you made a complete ass out of yourself by attempting to minimize the people who are producing the food that you and your family eat in order to stay alive.” (YakTriNews)

The Yakima Sheriff’s Office has turned over its investigation into corruption by Wapato city officials to the Federal Bureau of Investigation.  Washington state authorities have already found eight egregious acts of “gross misappropriation of government resources and unlawful activity” committed by the former mayor and city administrator. (Yakima Herald)

From the Shift Archives

In light of Michael Bloomberg’s debut appearance on the Democrat debate stage tonight, we thought our readers would appreciate this Shift report – from five years ago – on how he (along with fellow Democat billionaire presidential candidate Tom Steyer) has long been one of the secret financial backers pushing for extreme (and costly) environmental policies on West Coast states.  In a complicated scheme, Bloomberg and Steyer agreed to pay for high-priced individuals to promote Low Carbon Fuel Standards in Washington, Oregon, and California.  The big dollar plan was developed and coordinated by disgraced Oregon Governor John Kitzhaber’s office and included top staffers and political cronies of Governor Jay Inslee. And, of course, the mainstream media ignored it. (Shift) 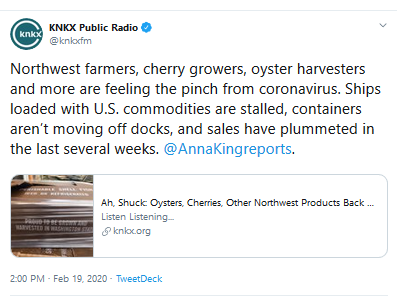