We are now halfway through the scheduled 60-day legislative session…

The Democrats lone legislative proposal to the voters passing I-976 is to have Sound Transit use a different vehicle depreciation schedule in the future to assess the car tab fees. If passed, the bill would slightly reduce the car tab fees, but would not approach the $30 fees which I-976 voters supported.  It should be noted that a lawsuit regarding Sound Transit’s overcharging process was recently argued in front of the Washington State Supreme Court, and that outcome could already force Sound Transit to use a different depreciation schedule. (News Tribune and Washington Policy Center)

The Everett Herald came out in support of the Democrats’ latest proposal to eliminate voters’ opinions on important state tax issues.  In an editorial, the newspaper supported Senator Patty Kuderer’s (D-Bellevue) bill that would do away with the public advisory votes on tax measures – which were created by an initiative vote of the people –  and replace it with a “public opinion task force” to obtain taxpayer’s opinion. The task force will likely be made up of liberal special interest donors (especially government employee unions) which profit from higher taxes. Thus the “task force” will likely support even more and higher taxes.  It is too bad the Everett Herald believes the public voice should be limited.  Maybe a more appropriate position for the paper to take is to encourage elected officials to respond to voters’ opinions instead of supporting ways to ignore their voice. (Everett Herald and Bainbridge Island Review)

As expected, the entire Seattle City Council caved into the radical demands of the extreme left and unanimously passed a measure which prohibits tenant evictions from rental property during the winter months, which will likely result in fewer apartment units being available in the city.  Councilmember Kshama Sawant’s original five-month eviction ban was amended to reduce the period to three months and to exempt landlords with four or fewer units.  A spokesperson expressed Mayor Jenny Durkan’s disappointment in the bill’s passage by stating, “Mayor Durkan believes we should focus on directing tenants to proven … programs that already provide millions of dollars to individuals and families to keep them in their homes.”  The mayor also said a costly legal battle of the ban will likely occur.  Durkan has not yet stated if she will sign or veto the measure.  With unanimous council support, the council has the votes to override the mayor’s veto. (Seattle Times)

The dispute between Snohomish County Executive Dave Somers and new Snohomish County Sheriff Adam Fortney became more intense over the Somers hiring the former sheriff to serve as a senior staffer in the Executive’s office.  Somers hired Ty Trenary, who was soundly defeated by Fortney in last November’s elections.  Somers and Fortney had previously been publicly sparring over problems with the county’s jail.  Fortney says hiring Trenary will negatively impact the relationship that the sheriff’s office has with the executive.  Fortney said, “As long as he’s (Trenary) there, it’s not going to work.” (Everett Herald)

An ethics complaint has been filed against Seattle Councilmember Kshama Sawant for using her office to promote a potential ballot measure.  The Executive Director of the Seattle Ethics and Election Commission filed the complaint, saying Sawant broke two laws promoting her “Tax Amazon” campaign.  The complaint states that Sawant broke an election law by using city facilities to promote a ballot measure and she broke an ethics law using city resources for non-city purposes.  A March 4th hearing has been scheduled to present the charges against Sawant, who will undoubtedly use the hearing to raise more out of state campaign funds and rail against the evils of capitalism.  (Seattle Times)

The already overbudget and past due proposed 1st Avenue streetcar will fail to move people faster than a far less expensive bus.  Since the streetcar is stuck in traffic and has limited mobility (because it runs on fixed tracks), a bus could take the same route and save the taxpayers millions.  A new tax on Uber and Lyft rides was recently passed to help pay for this boondoggle, which was originally due to be completed in 2019.  It is also believed the city’s management of the project is the center of a current federal government criminal investigation.  Let’s hope the investigation moves faster than the streetcar. (MyNorthwest and Seattle Times)

Saying, “Dow Constantine intentionally and unlawfully interfered with the federal government’s duty to enforce our immigration laws,” the U.S. Department of Justice filed a lawsuit against King County for banning Immigration and Customs Enforcement (ICE) from using Boeing Field to deport illegal immigrants.  When the federal government gave King County the land for Boeing Field, the county agreed to allow federal aircraft to use the facility.  The county believes the ICE flights do not apply to this agreement because charter planes are used. So the legal principle that King County Executive Constantine is standing on is a … technicality?  (Seattle Times)

Eastern Washington legislators have proposed bills to help reduce the cost of home construction to make housing more affordable in rural communities.  The housing crunch is not only a concern in urban Puget Sound markets, but Eastern Washington also has an affordable housing crisis.  Senator Judy Warnick (R-Moses Lake) and Representative Mike Steele (R-Chelan) have proposed bills that would take nearly 5% of local sales tax and apply it to local items like sidewalks, sewers, and gutters that will reduce construction costs and make homes more affordable. (iFIBER One)

The new leadership for the City of Wapato has been working through the legal and financial troubles left behind by the previous administration.  Former city administrator Juan Orozco, Mayor Dora Alvarez-Roa, and the previous city council left behind numerous lawsuits and criminal investigations over treatment of employees and financial decisions.  Wapato recently settled wrongful termination lawsuits by paying two former employees $65,000 each and covering their legal fees.  The city is working to settle seven additional lawsuits. (Yakima Herald) 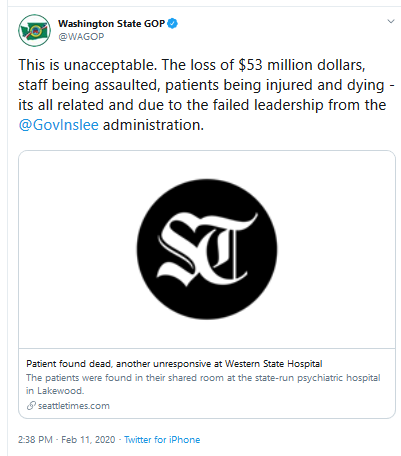 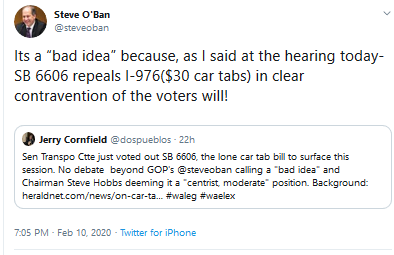