Governor Jay Inslee wants to spend an additional $51,400 per person to assist those who are homeless (on top of the billion dollars per year already spent on the issue).

Governor Jay Inslee wants to spend an additional $319 million on the homeless issue, which he promises will cut in half the number of those needing shelter in two years.  Inslee wants to take the money from the state’s rainy-day fund even though the 2019 legislature increased state spending by a record $8 billion dollars (17%). The money the Democrats have thrown at this issue has only made the problem worse, but Inslee promises that this money will magically solve the issue.  Inslee says the state funds will be spent to help a total of 6,200 people with shelter beds, rental assistance, and supportive housing.  This works out to over $51,400 per person on top of the billion dollars a year the Puget Sound region already spends on the homeless.  Maybe the issue is not money, maybe it is the policies. (Crosscut)

From the Seattle Times story on Inslee’s homeless proposal comes a confusing yet telling comment from our Governor.  Inslee said, “It’s a frustration as a governor to be governor of a state with the most successful economy in the United States and have a homelessness problem. It’s just a terrible irony.” Maybe it is because capitalism and free enterprise are creating wealth while socialist and liberal social policies have created and enabled a growing homeless problem. (Seattle Times)

While Democrats keep throwing funds at homeless programs that are not working, Republican Senator Hans Zeiger encourages spending state funds on proposals that help people avoid living on the street and provides them opportunities to be self-sufficient.  In a Seattle Times op-ed, Zeiger suggest 1) spending funds on programs that keep people from becoming homeless, 2) Establish a “guardianship” program for those struggling with addiction and mental illness issues, and 3) create jobs for those willing to work, (Seattle Times)

In a significant victory for open government advocates, the Washington State Supreme Court ruled that individual state legislators and both legislative chambers are subject to public records requests. The ruling states, “We hold that under the plain meaning of the PRA (Public Records Act), individual legislators’ offices are ‘agencies’ subject to the PRA’s general public records disclosure mandate.” The case was filed against the legislature by several state media outlets. (Washington State Supreme Court)

An on-going rift has developed between Democrat Lt. Governor Cyrus Habib and Senate Republican Leader Mark Schoesler.  The primary cause of the difficulties stem from Habib breaking from tradition and not accepting the caucus leader’s recommendations on appointments and instead making the appointments himself. (Everett Herald)

The News Tribune scoffs at the “string of breathless email pitches” from Washington State Democrat Chair Tina Podlodowski as she begs for donations.  Podlodowski says the money is needed because Governor Jay Inslee and Attorney General Bob Ferguson can’t raise funds during the state fundraising freeze.  As the editorial points out, Podlodowski’s argument is absurd since Inslee has already raised millions in special interest donations and Ferguson has already surpassed by $600,000 the amount raised for his 2016 re-election. (News Tribune)

Sound Transit’s CEO will receive a $6,000 bonus and a 4% raise (to $385,000) even though the agency has had a terrible year.  On top of legal action that determined Sound Transit has been overcharging vehicle owners for car tabs, which fueled a citizen’s revolt at the polls by passing I-976, the agency has several serious problems. “Sound Transit’s ridership stopped growing this year, many downtown station escalators and elevators don’t work and the National Transportation Safety Board primarily blamed the agency for failing to prevent a fatal Amtrak derailment two years ago in DuPont.”  The Sound Transit board says Peter Rogoff is due the bonus and raise because he is improving at “regional relationships, timely communication with the board.” For a job that pays nearly $400k a year, shouldn’t Rogoff have already excelled at those skills?    (Seattle Times)

Spokane Mayor-elect Nadine Woodward announced that current Ephrata city administrator Wes Crago will take on the same role in her new administration.  Crago, who had also served as a city councilmember in Ephrata, said one of his primary objectives is to “open the lines of communications with our City Council.”  Relations between the Spokane City Council and the current mayor, David Condon, have become strained in the past few years. (Spokesman-Review)

Following other Washington counties, Grant County commissioners voted to accept refugees.  President Donald Trump’s recent executive order states that a local government cannot be forced to accept refugees and must give consent before refugees are settled in its jurisdiction.  (iFIBER One)

An ethics complaint against Kennewick City Councilmember John Trumbo will proceed to a public hearing.  Trumbo is accused of repeatedly abusing his position to obtain information for personal benefit.  (Tri-City Herald)

In the latest of what the News Tribune calls Tina Podlodowski’s “string of breathless email pitches,” the Washington State Democrat Party Chair claims the Republicans will have 232 “first targets.”  In her email blast on the impeachment vote, Podlodowski pleads for contributions by declaring “every Democrat (232 out of 234) who voted in support of removing Trump from office will be Republicans’ first targets as we head into 2020.” Is it possible to have 232 “first targets?”  Also, Podlodowski should dig up her old high school civics books, for the vote by the House was not for “removing Trump from office,” but to “impeach” and send the matter to the Senate for a trial. (Washington State Democrat Party email)

In a story that has nothing to do with Washington State politics, we thought Shift readers would enjoy one of the funniest moments ever on C-SPAN.  Brad Woodhouse (a D.C. Democrat activists) and his brother Dallas Woodhouse (Chair of the North Carolina GOP) often appear on television to debate current events.  When they appeared on C-SPAN, they received a special caller – their mom.  You can watch as they cringe when their mom chastises them for arguing and hopes they get it out of their system before coming home for Christmas. (Jezebel) 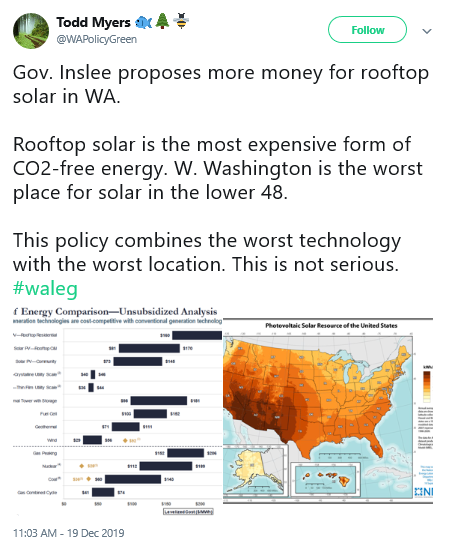 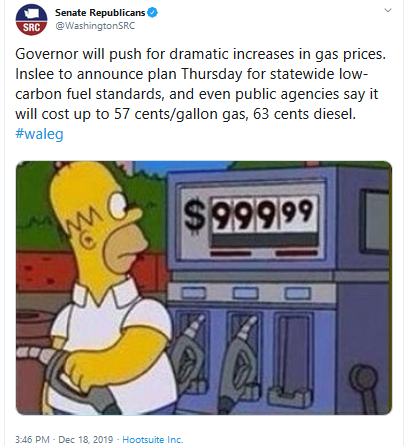