Government regulations are stopping many experienced health professionals from helping and reducing the pressure on the state’s medical community.

The Daily Briefing will be promoting on-line gatherings for campaign kick-offs, policy seminars, town halls, fundraiser, etc.  If you have an upcoming “virtual” event you would like us to promote, please provide to us (email: [email protected]) all the pertinent information. Thanks!

Washington State regulations are keeping some health professionals from joining the fight against the coronavirus.  Katherine Knable is like many former nurses who want to help in these difficult times, but are unable to participate because of state regulations.  Many are calling on Governor Jay Inslee to remove the unnecessary and burdensome restrictions to ensure our healthcare system has enough health professionals to meet the increasing  number of patients. (News Tribune)

State lawmakers say they will need to adapt to a changed reality after the current coronavirus outbreak has passed.  Legislative leaders, in a webinar hosted by the Bellevue Chamber of Commerce, stated that funding priorities and revenue collections will be considerably different than they were just a few weeks ago when the legislature passed its last budget before adjourning.  House Republican Leader J.T. Wilcox said, “There is going to be an assessed need to rethink almost everything we do as a state. There have been some people who have been really profound in their understanding that things are not going to go back to being just the same as they were. Not even after we are able to get back on our feet economically.” Bellevue Reporter

The Freedom Foundation has filed lawsuits in three Western states over government employee unions committing forgery to take union dues (and fund political contributions) from workers’ paychecks.  The Freedom Foundation filed a case in Washington State on behalf of a home care worker who had money illegally taken from her paycheck by the Service Employees International Union (SEIU).  The lawsuit contends that the SEIU used deceitful and illegal methods to obtain authorization to take dues from a worker who previously refused to pay union dues. (Freedom Foundation news release)

Among the many education proposals Democrats failed to act upon during the 2020 legislative session was HB 2933, which would have created an Education Choice Scholarship fund for Washington students.  Like many needed bills to improve our state’s education system, Democrats refused to even provide a hearing for HB 2933, due the greedy objections of the their financial benefactors at the Washington Education Association (WEA).  The bill, sponsored by Representative Vicki Kraft (R-Vancouver), would have provided families a portion of the state money which school districts receive for each student enrolled and allowed parents the option of spending the funds on private education alternatives.  The bill allowed local school districts to still retain about a third of the state funds allocated per student despite not having the student enrolled in its system.  The WEA was against this measure because it would have negatively impacted its dues revenue.  Apparently Democrats agree that a government union’s bank accounts (that provide funding for the Democrats’ campaigns) are more important than allowing parents the opportunity to ensure a quality education for their children. (Washington Policy Center and HB 2933)

The Washington State Department of Natural Resources will start handing out citations to people who refuse to leave state lands while “Stay at Home” restrictions are in place.  Many people have ignored state officials’ warnings and continue to visit state parks. (News Tribune)

Marijuana sales continue to increase during the coronavirus outbreak.  Many stores are offering on-line ordering and curbside pick-up. Cannabis retailers are expecting even more business when the federal stimulus checks are delivered in the next couple of weeks. (Everett Herald)

There are some commentators who are expressing concerns about using local public transportation during the COVID-19 crisis due to the large number of homeless individuals who ride the buses.  Liberal policies have created and enabled a growing population of individuals who live in unsanitary conditions and may be unaware of social distancing and other measures deployed to stop the spread of the coronavirus.  Many of these individuals use public transportation to get around Seattle or to stay warm. (MyNorthwest)

Washington State’s businesses continue to suspend their business operations to provide needed medical supplies.  Just as many distilleries have quickly become the manufacturers of hand sanitizers, many tailoring and upholstery business are now spending their resources making medical masks.  Royal Upholstery in Spokane is fulfilling a request from the Spokane Fire Department to provide masks for the first responders. (Inlander)

Experts believe 2020 will be a “calm fire season.”  Despite false warnings from environmentalists about low snowpack in Washington’s mountains, the Cascade’s snow accumulation was 109% of the expected total this past year.  This moisture level will likely result in fewer brush fires this summer. (iFIBER One and Twitter)

An exchange between a Yakima City Councilmember and a leader in the city’s gay community have led to calls for a resignation and a possible Public Disclosure Commission complaint. Councilmember Jason White called Yakima Pride President Cristina Ortega “an idiot” after she criticized his support for Idaho’s new law banning transgender women from competing in girls’ sports.  Ortega then called for White’s resignation.  However,  since Ortega has already announced that she is running against White in 2022, Ortega may be violating state election laws by using Yakima Pride’s non-profit resources to campaign against the incumbent. (YakTriNews) 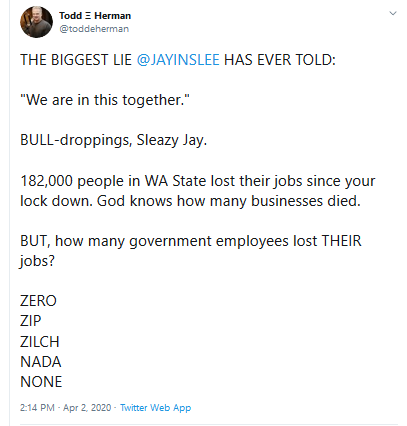 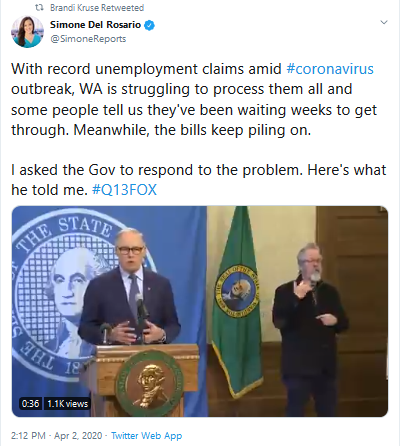