Despite a 20% increase in state revenues in the past two years, Democrat priorities left the state’s Department of Health unprepared to administer the current health emergency.

The Daily Briefing will be promoting on-line gatherings for campaign kick-offs, policy seminars, town halls, fundraiser, etc.  If you have an upcoming “virtual” event you would like us to promote, please provide to us (email: [email protected]) all the pertinent information.

The Washington State Department of Health (DOH) has been unable to provide necessary data on the coronavirus outbreak in our state.  Shift has been reticent to comment on official actions related to the coronavirus crisis, but this story is no April Fool’s Day joke. Jay Inslee’s Administration is scrambling to resolve problems caused by the DOH being unprepared to even be able to count the number of coronavirus cases in our state.  For nearly four days, the state has been unable to publicly provide important data on the impact and spread of the disease. Evidently DOH’s inability to provide needed information is not a result of the crisis itself, but by short-sighted decision-making by the department when it set up its data base for tracking infectious diseases – which seems unacceptable. (Seattle Times)

22 Washington legislators have asked Governor Inslee to reconsider his ban on recreational fishing.  While the governor had previously declared that it was permissable for people to engage in “outdoor exercise activities, such as walking, hiking, running or biking, but only if appropriate social distancing practices are used,” he had banned recreational fishing.  The lawmakers sent a letter authored by Representative Larry Hoff (R-Vancouver) asking that the ban be lifted to allow citizens to safely “decompress and enjoy life amidst the chaos.” (Clark County Today)

Attorney General Bob Ferguson is rightfully receiving criticism for his recent fundraising email that attempts to scare contributors with a false story about President Trump calling off the 2020 elections. As Shift reported yesterday, the irresponsible email concocts the ridiculous scenario that the only thing that can stop President Trump from calling off the November elections is another lawsuit from Bob Ferguson.  Leaders are supposed to provide stability during difficult times, yet our reckless attorney general has instead chosen to unnecessarily fan partisan conspiracies to prepare himself to run for Governor as soon as he can figure out how to get Jay Inslee out of the way. (MyNorthwest and Ferguson Campaign email)

Without warning, grocery store workers were thrust onto the front lines in the fight against the coronavirus, providing essential services to an anxious public.  The Fred Meyer company is recognizing the efforts of its employees (including the hundreds who have been hired in the past few weeks) by providing a “hero bonus” in their weekly paychecks.  (KEPR-TV)

As people look forward to a return to “normalcy,” financial analysts are debating whether the economic recovery will be “U” shaped (a few quarters of commercial stagnation before the economy rebounds) or “V” shaped (an almost immediate recovery).  Analysts with JPMorgan says the making of a “V” recovery are in place, and is currently occurring in China as its coronavirus cases have decreased. (Business Insider)

With Governor Inslee signing the extreme mandatory sex education for kindergartners bill (SB 5395) last week, Parents for Safe Schools is working the complicated legal issues to collect the signatures needed to place Referendum 90 on the November ballot.  Secretary of State Kim Wyman says she cannot extend constitutional deadlines for when signatures are due, but she can be lenient when it comes to restrictions on how signatures are delivered.  The campaign is looking for volunteers to help collect signatures through delivering petitions via email.  (KING5 News, Washington Legislature Bill Summary and Parents for Safe Schools)

Washington Secretary of State Kim Wyman has developed a web page to assist those needing help from her office.  Even though COVID -19 has caused Wyman to close her office for at least two weeks, there are many resources still available online and over the phone. (Secretary of State)

King County Executive Dow Constantine is under criticism for allowing county employees to continue doing non-essential tasks (and not practicing “social distancing”).  Work crews are still performing unnecessary landscaping chores, while private sector businesses are being told they must shut down.  Is this double standard because government unions pour millions into Democrat campaigns, like Constantine’s many races over the years? (MyNorthwest)

The business community is stepping up to provide necessary products as the state is battling the coronavirus.  This is no more evident than seeing how dozens of Washington brewers and distilleries have altered their manufacturing processes to make hand sanitizer for medical facilities, first responders, and the general public.  Lynnwood’s Temple Distilling has made hundreds of bottles of sanitizer (instead of making gin) that is going to medical professionals.  Aberdeen’s Westport Winery has been providing Grays Harbor County law enforcement officers with hand sanitizer.  (Everett Herald)

Spokane County’s temporary coronavirus testing facility was closed after the tent it was in blew down, so now the county has said it will re-open on Thursday in a covered barn on the Fair and Expo Center site.  The previous tent structure, which served as a drive-thru testing site in the Expo parking lot, was damaged by winds and closed on Monday. (Spokesman-Review)

Democrat lawmakers are asking the federal government to keep open the public comment period on its draft study on the Snake River dams.  Despite multiple public hearings (in which there were long stretches of no one providing testimony) and the ability for the pubic to express their thoughts via telephone and email, congressional Democrats want the federal government to delay the closure of the public testimony phase to 30 days after the end of the coronavirus public health emergency. Public comment has already been extended to close on April 14th. (Washington AG Network)

The Moses Lake Education Association is demanding that the Moses Lake School Board president resign simply because he suggested the district be fiscally responsible during uncertain times.  The union was outraged that President Elliott Goodrich hinted that the district might consider across-the-board pay cuts as one way to handle the loss of revenue from COVID-19.  In stating he has no intention of resigning, Goodrich said he felt it was his responsibility to bring reality into the discussion. “The fact is people are losing their jobs and sources of income. I need our school employees to understand that during this difficult time we should be thinking of how we best impact our community and economy. We cannot be blind to that fact.” (iFIBER One)

While most state leaders are concentrating on how to help our local economy after it has been hit by the coronavirus and problems at Boeing, Senator Patty Murray wants people to spend their money on long-shot U.S. Senate campaigns in Kentucky, Iowa, and Texas – and because of the candidates’ gender, not qualifications.  In an email to her supporters, our U.S. Senator in gold-plated tennis shoes, who does not have a campaign this year, is not asking people to help their neighborhood businesses or give money to local charities that are feeding the hungry, but instead she wants her followers to give money to struggling Democrat campaigns around the country.  This is the type of out-of-touch thinking that develops in career politicians who never hold town hall meetings and almost never meet with non-supporters. (Patty Murray Campaign email) 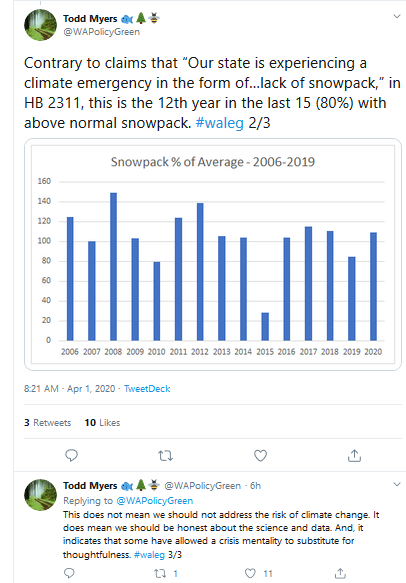