While also forcing her own staff to come to the office, Democrat Senator Karen Kaiser doesn’t mention other retailers as she singles out Amazon for having some of its employees come to work.

State Senator Karen Kaiser (D – Des Moines) is requiring her staff to work from her office yet is complaining that Amazon has some employees reporting to work.  Besides the obvious hypocrisy of this criticism from Kaiser, it also reflects the pile-on mentality of the Democrats to single out Amazon to follow a non-existing health guideline, while not applying the same standard to other retailers (or themselves). (MyNorthwest)

After years of refusing to use primary results, legislative Democrats last year pushed through SB 5273, which provided the controversial process for Washington’s 2020 presidential primary.  This law, passed when legislators thought they’d be helping Jay Inslee’s (since failed) presidential campaign, is now causing tens of thousands (if not more) votes to be thrown away and made irrelevant in the Democrat race.  First, each voter needs to publicly declare, by signing the outside of their ballot envelope, themselves as a Democrat for their vote to count, something many forget or purposely refuse to do.  The timing of the primary is now also a problem, as nearly all the 13 Democrat candidates listed on the Washington ballot have dropped out of the race, including many who have quit since Washington voters received their ballot two weeks ago.  Nearly 700,000 ballots had been returned by last Friday, and many likely votes have been cast for Senator Warren, Mayor Buttigieg, Senator Klobuchar, or Mayor Bloomberg.  Voting for one of these candidates will now be a wasted vote in determining who will be the Democrat nominee.  Because of the process Democrat legislators selected (in consultation with the Washington State Democrat Party), a significant percentage of Washington votes will not count. Talk about “disenfranchising voters.” (Washington Legislature Bill Summary and Secretary of State’s office)

The Washington State Democrat Party is worried that journalists are dumb, and will declare a winner after the initial, and very partial, vote totals are counted in next Tuesday’s presidential primary.  As with other Washington elections, where less than half the cotes are counted election night, the vote leaders could fluctuate considerably as ballots are returned in the mail.  The party sent an email to media members warning, “If your outlet desires to ‘call’ the primary for a specific candidate, we urge you to be careful about the language you use to avoid giving your audience a false impression that the determination is being made on any basis aside from the statewide popular vote as reported by the Secretary of State on Election Night.” (Cornfield Report/Everett Herald)

Tacoma Mayor Victoria Woodwards gave her State of the City speech on Wednesday, and launched a new city program called “Compassionate Tacoma.”  The program is encouraging residents to “make Tacoma a more welcoming, connected, resilient, and vibrant community by listening and serving others with love.”  The mayor encouraged residents to sign up for the program where the city-run website says participants will be the first to be notified “to get swag that lets you show your commitment to a more Compassionate Tacoma.” (News Tribune and City of Tacoma)

Local conservatives and liberals united in blasting an NBC report that Seattle was a “ghost town” due to the coronavirus.   The network’s Los Angeles-based reporter Alicia Victoria Lozano posted a story that due to the virus many Seattle’s streets and business were vacant.  Residents of all political stripes fired back with evidence the report was not factually correct. Were Democrats calling this “fake news”? (MyNorthwest)

A small, grounded boat, serving as a different kind of homeless “tent”, was allowed to create significant environmental damage before it was finally removed by the City of Seattle.  Homeless individuals were squatters in the broken-down vessel in Lake Washington, near Seattle’s Seward Park.  The boat was leaking fluid and the inhabitants were throwing garbage and waste into the lake.  Even though the craft was causing environmental harm and the neighbors repeatedly complained about this public health violation, it took the City of Seattle nearly four months to remove the boat. (The Post Millennial) 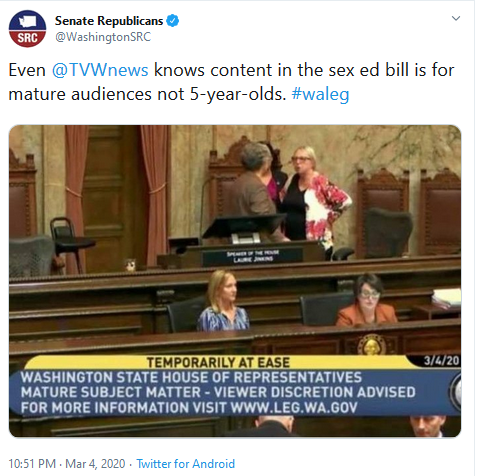