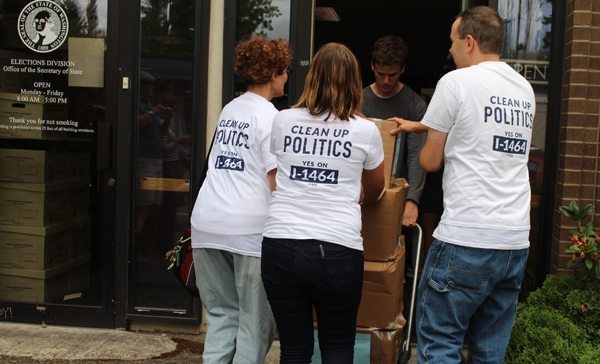 It is saying something when one of the expensive liberal initiatives on this fall’s ballot is such bad public policy that it stands above the others in earning public scorn. And among the wallet-grabbing and job-killing plans sponsored by a variety of Left-leaning groups this year – such as raising the statewide minimum wage by 40%, or passing a record-breaking $54 billion transit plan for Puget Sound, or even instituting a first-in-the-nation carbon tax that will raise gas prices by at least 25 cents per gallon, the concept by Initiative 1464 is so noxious that one newspaper took it down like this:

“Initiative 1464 is a terrible idea on several levels. Let’s start with its unnecessary call to amend the law to allow public funds — tax dollars — to be used to finance campaigns for elected offices. This, on principle, should not be a function of government. Nor is it a sensible use of tax dollars.”

That’s right, the Democrat activists behind I-1464 want to use state tax dollars to let individuals (and not necessarily even registered voters) fund their favorite legislative candidates using your money. That way it will free up resources for their dark-money groups to spend on other liberal campaigns which can’t collect public funds. It is patterned after a proposal that was passed by Seattle voters last year, though it has not yet been implemented for everyone to see how bad an idea it truly is for the public.

The Walla Walla Union Bulletin also slams the way that the initiative sponsors propose paying for the scheme – by taking away an advantage that select Washington towns have for attracting consumers by offering a sales tax exemption to residents from other states. “Repealing  sales-tax exemption would hurt border communities such as ours. A large percentage of purchases in this Valley are made by people who live in Milton-Freewater and Umatila County. If Oregon residents were forced to pay the sales tax of 8.9 percent they would opt to shop elsewhere, either to save money or out of principle.”

Evidently, this is what passes as a two-fer for liberal groups – getting other people’s money for their favorite candidates, and hurting the economy in towns far away from Seattle.