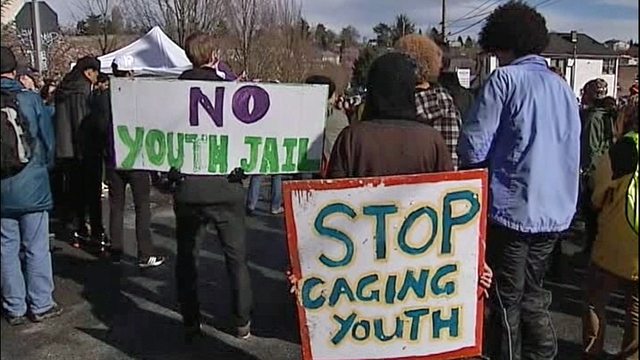 Shift wrote earlier this week about the surprise protest at a Monday event dedicated to declaring Washington a “hate free zone.” Seems that some activists are very upset by the idea that the city would allow King County to build a new youth jail to replace an aging one.

But the haters – err, protestors – who disrupted that event must have decided to turn this week into a protest-a-thon, marching outside Seattle Mayor Ed Murray’s house on Tuesday,  and then organizing an urgent petition against the County’s re-build Wednesday, and topped off by getting local rapper Macklemore to weigh in on their side as well.

Unfortunately for the protestors, Mayor Murray wimped out on them, issuing a statement that he was powerless to act, according to liberal blog PubliCola. Evidently there wasn’t enough campaign money to make it worth Murray’s while, for he dismissed the protestors by saying “the Office of the Mayor cannot intervene in any permitting decision, including this one, as it is a technical decision based on the county’s application.”

That didn’t go over well with protest leaders, especially after the city approved the necessary permits Thursday. The Seattle Times reported that “Rose Harriot, an opponent, said the mayor ‘cannot wash his hands’ of the decision. ‘Mayor Murray had the power stop this racist jail-building project in its tracks,’ Harriot said.”

Another protestor went further. From the Times:

“Ardo Hersi, another activist, said she’s ‘really surprised but not really surprised. These politicians say they care about the people who elect them and who they work for. But in all honesty, they don’t, and their actions are proving that,’ she said.

“‘Most politicians are older, white men. They don’t know what it’s like to have cops in your neighborhood, in your high school, cops picking on you,’ she said, vowing to continue opposing the project.”

Of course, the protestors don’t want to focus on the behavior, generally of the criminal kind, that requires the presence of jails and court rooms. Instead, they want to focus on how they could better spend the money if the city and county would just listen to them.

However, according to the Times, “the case for a new facility is rock solid. King County’s youth courthouse and detention center were built in 1952 with a projected 30-year life span, when the county had about one-third the population it does today… Like so many of the protests in Seattle’s current political environment, facts have gotten lost in the rhetoric.”

So now Murray – who is up for re-election next year – has to determine how he can demonstrate he cares, without actually caring.

This is a lump of coal in his stocking that the Mayor could do without this Christmas.