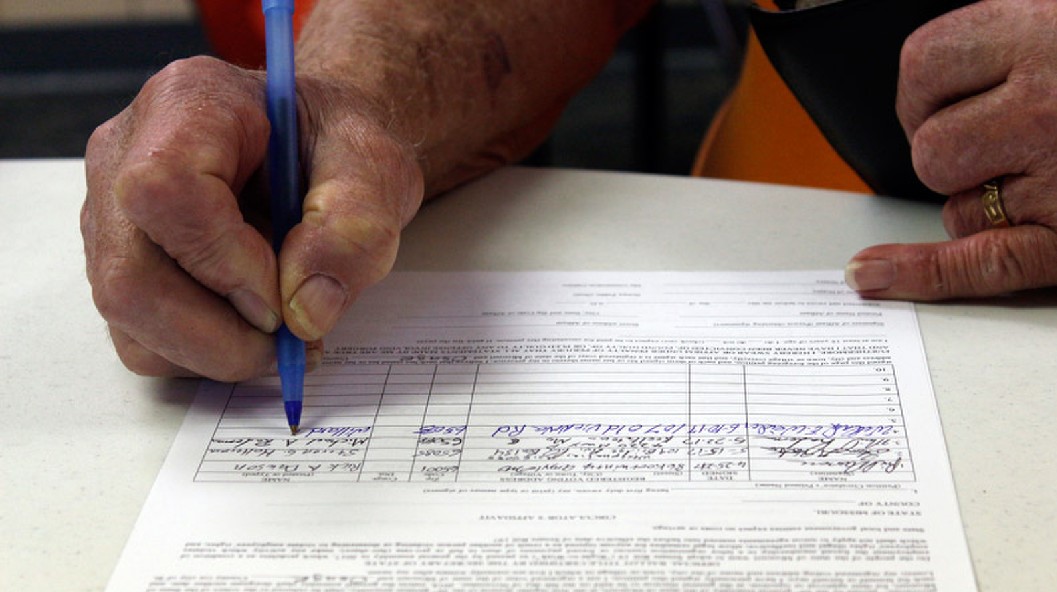 Career Democrat politician Jessie Wineberry, a retired State Legislator, failed candidate for U.S. Senate, Seattle City Council, and most recently for Congress, is trying to transition to become an initiative kingpin, but that is proving to be a bit of a challenge. So, now he wants to submit initiative signatures electronically, because it’s too hard to collect actual, “wet” signatures from real people.

There is over 100 years of legal precedent in the initiative and signature-gathering process. But Wineberry, who has proven he has little respect for the law with his arrest for evading the police, thinks the campaign laws for signature gathering don’t apply to him. He is joined by Democrat Representative Zach Hudgins, who despite claiming “I am not a lawyer”, now wants to reinterpret the law in their favor.

Wineberry, who has shown his political naivety in getting crushed by incumbent Congressman Adam Smith in 2016, and failing to pass previous initiatives he has led, (while failing to pay his initiative workers), is now proposing the Secretary of State accept electronic signatures for his current I-1776 initiative. The campaign hopes to reverse previous voter approved measures which have removed racial quotas.

Using the coronavirus outbreak as an excuse, Wineberry and Hudgins think electronic signatures should be treated the same as paper signatures.

The I-1776 campaign has published a website completely ignoring the requirements of initiative state law. The campaign claims that if the voter affirmatively checks off a box that they have read and understood the initiative, and types a name into the website, that should count as a signature.

There’s a problem with the Yes on I-1776 campaign’s logic, and with Mr. Wineberry’s and Mr. Hudgin’s self-serving approach, however. It’s the pesky Washington State law that requires petitions be on printed sheets of paper. Both Wineberry and Hudgins should understand the law, since they both have served as lawmakers.

One of the reasons the Washington State Attorney General reviews an initiative for accuracy is that it must represent clearly to the signer what the initiative actually does. The initiative must follow strict rules for print size, language clarity and content. Just ask Washington’s current hyper-partisan Democrat Attorney General Bob Ferguson how important this is. When Bob decided to ‘tweak’ the title of the 2018 initiative I-1639 to match his anti-gun agenda, a Thurston County Superior Court ruled against him and ordered several amendments to remove Bob’s title ”tweaks”.

State initiative law exists to make sure signatures are collected ethically, prevent fraud, and that the signer understands what they are signing.

The Yes on I-1776 campaign website doesn’t attempt to do any of this. It is an obvious attempt at collecting signatures en-masse to pass an initiative that has failed in the past. Even Democrat Senator Sam Hunt, who chairs the Senate State Government, Tribal Relations and Elections Committee, doesn’t think it’s acceptable to use electronic signatures.

The only other serious signature-gathering effort this year did not encounter the problems that Wineberry has faced. Referendum 90, a campaign aiming to overturn the Democrats ‘new law mandating teaching kindergarten kids explicit sexual information, was able to collect 266,000 signatures by the signature-submittal deadline.

This isn’t the first time Hudgins has tried to change the rules.

Hudgins proposed House Bill 2383 in 2018 to change state law to allow electronic signatures on initiatives. It was so popular that not one of his Democrat peers co-sponsored the bill and it failed to get out of committee, which is stunning, since Hudgins chairs the committee.

It’s obvious Wineberry and Hudgins have been watching too much Disney channel while stuck at home, thinking about how to bend the law in the initiative process. As Eeyore once said,

“This writing business. Pencils and what-not. Over-rated, if you ask me. Silly stuff. Nothing in it.”

The framers of the Washington State Constitution thought differently and for good reason.