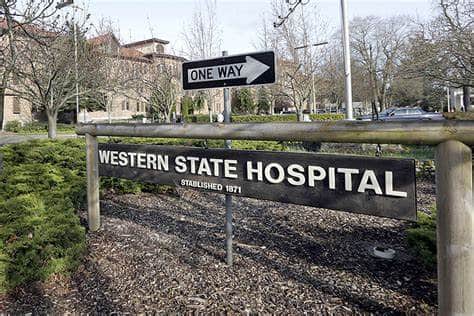 As Governor Jay Inslee spends his third term having the Washington State taxpayers fund expensive luxury trips for he and his wife to hobnob with wealthy environmentalists at exclusive receptions around the globe, people are truly suffering due to his administration extremely poor management of the state’s mental health system.  The Tacoma News Tribune reported last week on the latest example of very questionable (and concerning) actions taken by the Inslee Administration which strongly suggest there is no clear direction or leadership at Western State Hospital, the state’s largest mental health facility.

Incredibly, back in 2017, the Inslee Administration knowingly hired a career criminal with 22 felony convictions (who had just been charged for committing even more crimes) as a counselor at Western Washington Hospital in Pierce County. Today the counselor does not deny he stole more than $5,000 from 13 patients, as he had access to their petty cash accounts. While he was allegedly stealing from patients, the counselor’s annual salary jumped from $41,800 to $118,000.

Mark James was hired by the Inslee Administration just 13 days after he was arrested in Pierce County on a fugitive warrant from Oregon for dealing heroin and methamphetamines.  The Western State Hospital administration was evidently aware of James’ previous 22 felony convictions (a full background check was conducted by the Inslee Administration prior to James being hired) and then wrote letters to the judge in Oregon supporting James when he was convicted of selling and possessing illegal drugs. James admits he profited from selling heroin to a pregnant woman.  James was sentenced 30 days in jail and 36 months of probation for the crimes he was convicted of in Oregon after he was hired to work at Western.

If someone with 22 felony convictions, with more felony charges pending, can be hired by the Inslee Administration, and then have his salary increase nearly threefold, one has to wonder who else has been hired by the state and how bad does someone’s criminal record have to be before they are denied a job where they have access to any taxpayer’s money, let alone vulnerable patients’ petty cash. This is the latest of several major problems with Governor Jay Inslee’s mis-management of the state’s mental health facilities.  Both Western State Hospital in Steilacoom and Eastern State Hospital in Medical Lake have failed many federal inspections (and Inslee even allowed Western State to lose its federal accreditation in 2018, costing taxpayers $53 million). Both facilities failed to adhere to safety guidelines during the COVID pandemic, resulting in major outbreaks for both staff and patients.

Consider that Washington State taxpayers are currently responsible for nearly $100 million in court fines because the Inslee Administration has failed to perform competency treatment for more than 900 criminals sitting in local jails.  The suspect in an Idaho couple’s murder was previously released from custody by a Clark County judge due to the extraordinary delay caused by the backlog of those awaiting competency treatment.   Recently four Western State Hospital employees won $2 million after a lawsuit demonstrated that administrators failed to protect staffers from physical attacks by patients.  The same employees have since filed another lawsuit against the Inslee Administration for failing to obey state public records laws by not turning over requested internal reports in their first trial.

We can expect to see the governor roll out more money for mental health programs when he releases his various budget proposals in the next couple of weeks.  Yet he has done this before, and problems continued to plague the poorly run facilities. Obviously more money is not the answer. Before the state waste more tax dollars, there needs to be a change in leadership and policies in our state’s mental health programs, or the same problems will persist.