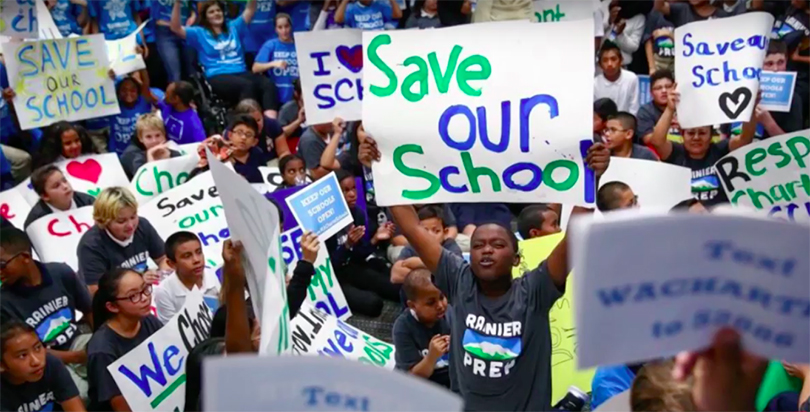 One of the clearest forms of institutional discrimination in our country is found here in Washington State, and it is due to the money and power that the Washington Education Association has over the Democrat Party. The union aims this discrimination  at the state’s 3,500 charter school students and their families, partially because the union doesn’t receive dues payments from the charter schoolteachers.

Currently there are nine charter schools – created by voter initiative – in our state and five more are projected to open this year , serving 1,000 more students.  Charter schools have a higher percentage of students who are minority, immigrant, and lower income than the state average.  Many of these students were not receiving the education they needed in the non-charter public school system, and most schools have a waiting list of students who wish to enroll.

Why does this financial discrimination occur? Because the Washington Education Association (WEA) fears the success of charter schools and wants to put them out of existence.

Even though the WEA dislikes charter schools because they don’t require union membership for their teachers, the primary reason union bosses want to close charter schools is the freedom the schools have to teach their students.  By not being restricted by union rules and regulations, charter school administrators and teachers can better meet the educational needs of individual students.

After Washington State voters passed Initiative 1240 in 2012 (which teachers’ unions spent over $450,000 attempting to defeat), the WEA filed two separate lawsuits attempting to stop charter schools from opening. Fortunately, the WEA has been so far unsuccessful in reversing the voters’ decision in the courts.

Today, the union bosses at the WEA want to make sure the state continues to deny charter schools the funding other public schools receive.

While the WEA’s large war chest (built by taking money from teachers’ paychecks) does not have complete control over voters’ opinions and judicial decisions, it does have dominance over the Democrats who control the state legislature and hold state executive offices (including Governor Jay Inslee and Superintendent of Public Instruction Chris Reykdal).  It is these elected officials who can end the financial discrimination against charter schools – yet refuse to act in the interest of the students.

In the current legislative session, bills have been proposed to somewhat end this political favoritism. HB 2788 and SB 6550 would provide to charter schools $1,550 per student to partially make up for not receiving funding from local levies.  Yet, due to the political power of the Washington Education Association, both bills are essentially dead.  In fact, while HB 2788 received a very brief public hearing late one evening in front of the House Appropriations Committee, SB 6550 received no public hearing from the Senate Early Learning and K-12 Education Committee.

This is yet another example of how Democrat legislators serve the needs of the union bosses at the Washington Education Association instead of the educational needs of our children.  Just like another 2020 legislative inaction to deny special needs students access to educational options, by discriminating against charter school students,  Democrats are hurting those who most need the support.

And yet they do not care.