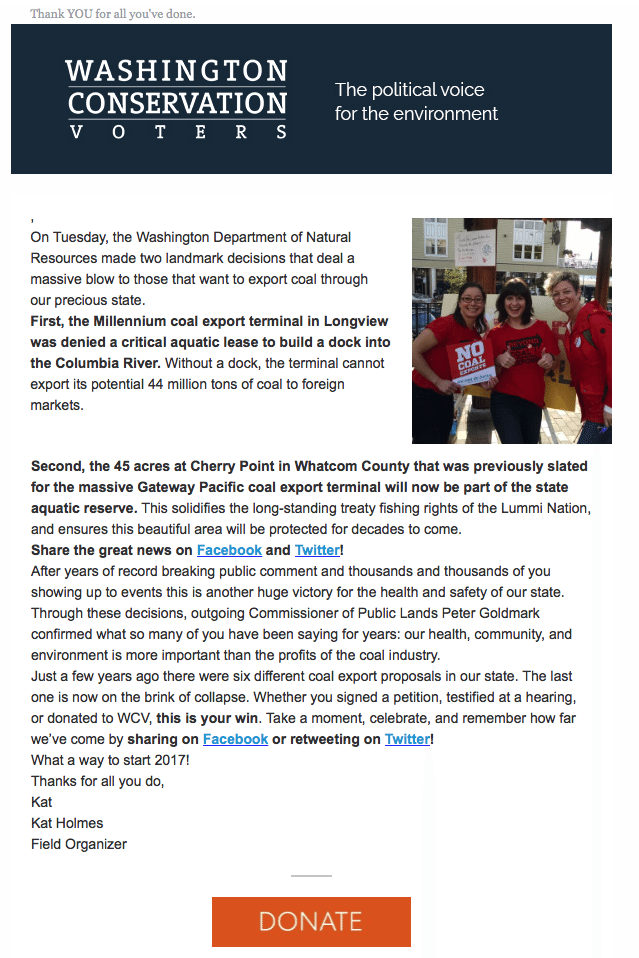 [Full text: On Tuesday, the Washington Department of Natural Resources made two landmark decisions that deal a massive blow to those that want to export coal through our precious state.
First, the Millennium coal export terminal in Longview was denied a critical aquatic lease to build a dock into the Columbia River. Without a dock, the terminal cannot export its potential 44 million tons of coal to foreign markets.

Second, the 45 acres at Cherry Point in Whatcom County that was previously slated for the massive Gateway Pacific coal export terminal will now be part of the state aquatic reserve. This solidifies the long-standing treaty fishing rights of the Lummi Nation, and ensures this beautiful area will be protected for decades to come.
After years of record breaking public comment and thousands and thousands of you showing up to events this is another huge victory for the health and safety of our state.
Through these decisions, outgoing Commissioner of Public Lands Peter Goldmark confirmed what so many of you have been saying for years: our health, community, and environment is more important than the profits of the coal industry.
Just a few years ago there were six different coal export proposals in our state. The last one is now on the brink of collapse. Whether you signed a petition, testified at a hearing, or donated to WCV, this is your win. Take a moment, celebrate, and remember how far we’ve come by sharing on Facebook or retweeting on Twitter!
What a way to start 2017!
Thanks for all you do,
Kat
Kat Holmes
Field Organizer]