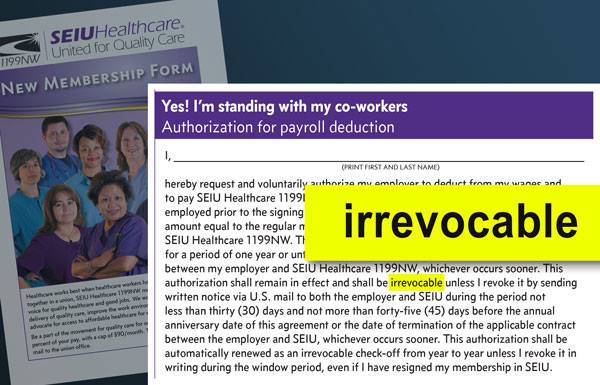 That’s because most observers, even pro-union voices, expect the court to rule against “closed shops” and forced union dues for government employees. Those workers, the court is expected to rule, have a 1stAmendment right to not join a union and cannot be forced to pay dues or fees.

If the predictions are correct, governments won’t be able to make union membership a requirement for the privilege of working for them. State and local government unions here will have to adjust.

There will be music – sad, sad music

Public union leaders are scared they’ll have to – cue the world’s tiniest violin – prove their value to workers and put effort into gaining and retaining members. The situation today is so much easier for them; right now, workers have no choice in forking over money to public unions.

Many of the leaders of public unions haven’t been too anxious to talk about Janus. Maybe that’s because their legal arguments in the case create a public relations problem – and a member relations problem.

On the one hand, union leaders argue their organizations do great things for workers – so they must be popular, right? On the other hand, a key part of the unions’ argument rests on the “free rider” problem – that given the chance, lots of government workers will rely on the union to bargain but not bother to contribute.

It’s tough to argue both “we proved great value to workers and they love us for it” with “many of our feckless members would drop us [finger-snapping sound] like that if they could.” These free-riding workers are just too cheap to know what’s good for them.

Public unions here in Washington aren’t waiting for the Janus ruling to come out before responding. They’re already working to lock workers into paying dues. And they can count on state government to help them. 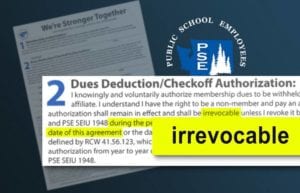 The Inslee Administration wouldn’t dare cross government unions. It has been working with SEIU ever since a ruling in a similar case, 2014’s Harris v. Quinn ruling on “quasi-government employees.” SEIU’s leadership had specific asks to Inslee to keep workers’ money flowing to the union, and he has obliged.

Public unions know they so totally own Inslee that when he addressed the State Labor Council once, his walk-up music was “Signed, sealed, delivered, I’m yours.” No, that is not a joke.

Legislative Democrats have done their part too, completely changing this year how Medicaid-reimbursed home care is administered and paid for. The upheaval of the system had one purpose: To ensure home care workers are locked in to handing over a portion of their paychecks to SEIU.

The beatings will continue until morale improves

Public unions here are sending a flurry of happy-sounding communications to members emphasizing solidarity and standing together. This flyer from the Washington Federation of State Employees is a good example. It looks almost like a petition – sign it to show union support! 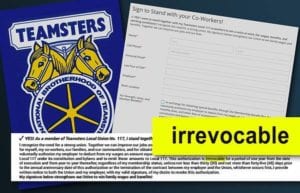 But there’s an important word that crops up in the fine print – on this and several other recent union flyers – “Irrevocable.”

By signing, a worker is agreeing to continue paying union dues. For anyone with an irony detector, it’s notable that the union emphasizes that employees are signing “voluntarily” to an agreement that is “irrevocable” – it cannot be revoked later if the worker chooses.

And the unions are looking to go back to the same old games regarding opting out of dues. In the fine print, it says a member can only leave the union by notifying it “not less than ten (10) days and not more than twenty (20) days before the end of any yearly period…”

If it was a business telling consumers they can only opt out of continuing a yearly service if they remember to cancel within a certain 10-day window that occurs once a year, Bob Ferguson would sue them in a heartbeat. But a union? No, Bob’s probably not going to touch that one.