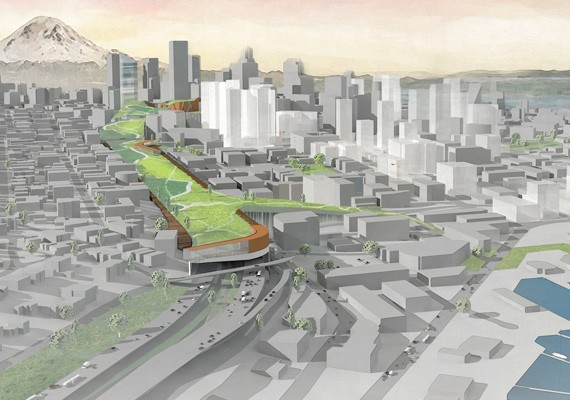 Paint us unsurprised, but it seems some of the socialist nuts/intellectual elite in Seattle are using the recent heat wave as an excuse to rid themselves of that pesky freeway that runs through the city. Claiming that we need to rid ourselves of the freeways because they store too much heat in the concrete, Democrat activists are wanting to add a “lid” to I-5 through downtown Seattle, and have already wasted thousands of taxpayer dollars to study the hair-brained scheme.

The ultimate goal? Remove I-5 from Seattle completely.

And if you think that sounds crazy, it is – but not to the transit fanatics who think cars and trucks are evil, and currently carry sway with Seattle’s elected officials.

Claiming that adding a lid or removing the freeway will save lives and solve the housing crisis, Doug Trumm, the Executive Director of the Urbanist, a local socialist mouthpiece, advocates for a complete removal of the freeway from Seattle and has written extensively about it. Trumm places his hope in Sound Transit buses and trains to solve the mobility disaster which removing I-5 would cause. He also claims, erroneously, that I-405 can handle the extra traffic (because evidently he has never travelled that always-jammed non-Seattle highway).

Never mind that I-5 is the main north/south corridor from Canada to Mexico, and transports food and supplies up and down the West Coast. Little facts like these are wasted on liberals when global warming is being discussed.

Completely unconsidered by these batty “experts” is the fact that removing I-5 from Seattle, or severely restricting traffic movement with a lid, would completely destroy commerce in the city. The I-5 freeway allows food, medical supplies, commerce, workers and unfortunately more liberals to move in and out of the city. Without the freeway, how will all those soy lattes get delivered to Capitol Hill?

Joking aside, removing I-5 would be the end of Seattle, and is one of the most damaging ideas that has come out of the looney Democrat left in the last few years.

The Seattle City Council paid for a 151-page feasibility study last year on the idea of covering I-5, and after a series of extensive meetings the conclusion was the lid would be “a large and expensive undertaking”. Nowhere in the report does it address the traffic and utility impacts a lid would cause, but that’s just fine since Seattle would get a new park (where future homeless encampments can grow) and have an equitable solution to a problem that doesn’t exist. And there would be no way to expand the freeway to meet future needs, even though Seattle is now a choke point for traffic driving through.

Sound Transit, running low on funds because no one is riding its trains to nowhere during a pandemic, wants in on the action, so another new train and tunnel are part of the lid plan at massive taxpayer expense.

In the unrealistic utopian world the lid protagonists live in, once the freeway is covered, everyone will bicycle or walk to work (and likely have unicorns and rainbows flying around their heads while they do it). Those, like Trumm, who want to see the freeway completely removed, just don’t care about the impacts to anyone outside of Seattle. People who have to work in Seattle and who are not willing to live under the Marxist rule of the Seattle City Council and choose to live outside of the city, are going to have a hard time getting to work.

Of course, the lid or the removal of I-5 would be a massive financial cost and since it’s a federal highway, Seattle wants the rest of the country’s  taxpayers to chip in and pay for it through higher property taxes and gas taxes. While the rest of the state struggles to pay for roads the Democrats won’t fix, Seattle is trying to destroy theirs.

The studies and proposals thankfully are just that, but that’s how Democrats start the process of beating you to death with their harebrained schemes. Eventually you get sick of the berating, just give up, and let them have their way.

One good thing about removing I-5 from Seattle, though, is that socialist intellectuals will be stuck in Seattle and won’t be able to get out. That’s almost worth the money.