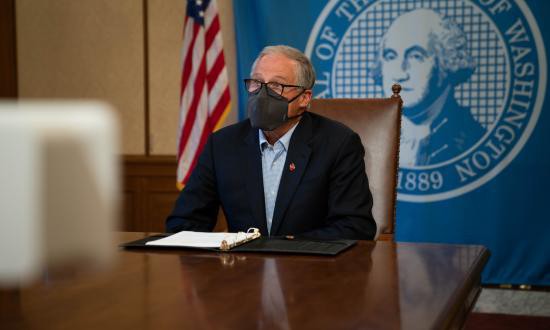 Two weeks ago, as part of his 2021 budget proposal, Democrat Governor Jay Inslee announced he was going to spend over $30 million in taxpayer dollars on dubious equity and diversity programs at the state’s community colleges and universities.

Like a proverbial bull in a china shop, Inslee is blundering ahead with his version of diversity dogma, seeking to impose it on the rest of us. This is despite voters sending a clear message opposing Inslee’s ideas, by opposing Referendum 88 in November 2019, thus restoring an affirmative action ban which state legislative Democrats had ended.

At first, the liberal loons on the left celebrated Inslee’s expansion of government, but their glee soon faded.

Not two days later, Inslee in his usual tone-deaf approach to governing, announced a round of several hundred-million-dollar cuts to education funding which immediately erased the $30 million increase in so-called education spending.

Of course, he doesn’t expect his new, do-nothing programs to be curtailed, but instead classroom and school budgets will be shrinking.

In contrast, Republicans over the last few legislative sessions have increased education funding while cutting tuition fees. On the other hand, Democrats, who publicly say “it’s all about the kids”, seemingly much prefer funding more lucrative state contracts with their buddies at the state’s largest teachers’ union, the Washington Education Association (WEA).

Since most kids are at home, thanks to Inslee’s slavish devotion to WEA demands that teachers be kept from returning to classrooms, some reductions in school budgets seem quite reasonable. This is unless you are the Central Washington University faculty member who, in a recent email, lamented Inslee’s lack of compassion for the educators, many who are suffering through the pandemic on 100%-taxpayer-funded salaries and generous benefit packages while staying at home. Actually, that’s not entirely accurate, in some cases the teachers are in the woods, with poor internet!

Not wanting to be accused of being fiscally responsible, Inslee has proposed massive tax increases to fund the next state budget which dwarf any potential spending reductions. This includes a state income tax on capital gains, a gas tax in the form of a Low Carbon Fuel Standard, and even raising taxes on health insurance policies during a pandemic. Inslee is demanding these new taxes even though his own budget projections show state revenues increasing 4.9% in 2021, meaning he has more to spend in the next budget than his current record-breaking one.

Here are just a few of the top priority highlights from Inslee’s new 2021 tax-and-spend dream budget:

And after all that outrageous spending, the cherry on the coronavirus budget cake is $624,000 to prepare for the next pandemic.

Putting Jay’s budget priorities in perspective, his budget calls for a hundred times more spending to help salmon swim upstream (on the fish culverts) than on helping Washington residents get back to work (after his latest random business shutdowns threw them out of their jobs just before the holidays).

Washington residents and businesses are buckling under Inslee’s draconian lockdowns and unconstitutional restrictions, and his knee jerk response is to jack up taxes even higher so he and his special interest campaign donors can have more of your tax dollars to spend.

As with the residents of Seattle, the rest of Washington can only take so much before they leave. That moment is coming perilously close for many, and Inslee is doing everything he can to make it a reality.