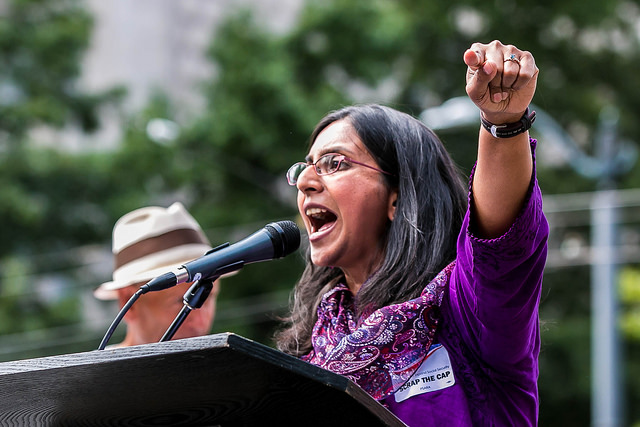 Seattle Councilmember Kshama Sawant, who identifies as a Socialist Alternative Party (SAP) member has managed to scare the rest of the Seattle City Council into creating a taxpayer-provided slush fund to pay the private lawyers defending Sawant against her own malfeasance.

Sawant, who is so radical that she makes Democrat Seattle Mayor Jenny Durkan look like Mr. Rogers, is facing a recall petition, filed by one of her own constituents. The petition alleges that Sawant has “used her position in violation of the law or has recklessly undermined the safety of others”. In one such example, Sawant led a group of protestors into city hall, using her city-issued cardkey to enter a closed public building, to intimidate the other members of the very same council on which Sawant sits. In another part of the complaint, Sawant is alleged to have used the power of her office to discover the Mayor’s personal home address (which is private, due to her previous service as a U.S. Attorney) and then led a march over to the house to protest the pending closure of the crime-riddled blight known as the Capitol Hill Autonomous Zone (CHAZ) area on Capitol Hill.

The initial amount allocated for Sawant’s legal fund is $75,000 and was authorized by a 7-1 vote of the city council, with Democrat Councilmember Debora Juarez the only one opposed. Juarez stated that she wasn’t sure if Sawant was acting in her official capacity when she let the CHAZ protestors through the locked city hall doors.

At least Juarez asked the question, even if it’s beyond a reasonable doubt that allowing unauthorized people into a locked public building is not in the city councilmember job description.

State law appropriately allows a city council to approve legal fees to defend a councilmember, since they are sometimes sued over official actions, sometimes frivolously, and serving in office would become quite the expensive endeavor without some protection. However, a councilmember like Sawant that is going out of her way to break the law is another matter.

Obviously, Juarez had her doubts and sheepishly tried to stand up to Sawant. Juarez knows she has to be careful. The last time she tried to keep a campaign promise to add more police officers, Sawant and her devotees marched to Juarez’ house to protest. Juarez, feeling bullied, eventually gave in and voted to defund the police and cut 100 officers from Seattle Police Department.

Not exactly a profile in courage. But, the rest of the council, incidentally, folded like a cheap suit and decided to fund Sawant’s defense to keep their own homes out of her address book.

The Washington State Constitution allows for a recall petition for wrongful conduct that affects, interrupts or interferes with the performance of official duty. As part of the recall process, a judge reviews the petition for its merits. King County Superior Court Judge Jim Rogers agreed with the petitioners, and has said the effort can proceed on four of the six charges raised against Sawant.

This is not some accidental oversight or simple disagreement on a vote. Sawant went out of her way to allegedly break the law and violate her oath of office. Her disregard for the rule of law will end up costing the Seattle taxpayers thousands of dollars.

If Sawant was not acting in her official capacity, why should the residents of Seattle pay for her defense?

Next in the recall process is collection of 10,800 signatures that the organizer, Ernie Lou, is confident he can gather by the deadline next year.

For the future of what remains of Seattle, we can only hope he does, and then hope that the district’s voters have finally tired of the publicity-seeking disaster that is Kshama Sawant.