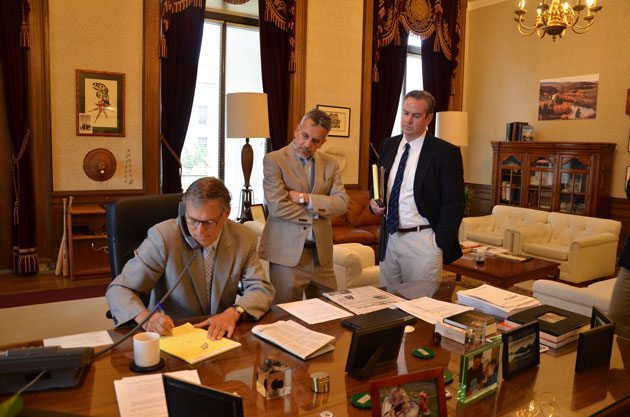 Now that David Postman is head spinmeister (officially the Executive Director of Communications) for Jay Inslee, a key aspect of his job is to try to keep the media from focusing too much on Inslee breaking his campaign promises. Recently obtained emails reveal that Postman’s approach to achieving this challenging ambition involves a certain degree of trying to bully journalists.

Well, if anyone assumed Postman limits his petulant responses to his former colleagues at the Seattle Times, they were wrong. According to an email recently obtained by SHIFT, Postman offered similar treatment to then-Associated Press reporter Mike Baker (who is now at the Times).

On March 30, 2013, Baker wrote an article entitled, “Gov. Inslee tax plans stretch campaign promises.” The article reveals how Inslee’s 2013 budget plan “proposed to make temporary taxes permanent and to limit tax exemptions on everything from automobile trade-ins to bottled water.” Baker called foul on Inslee’s claim that he was doing exactly what he said he was going to do on the campaign trail. He goes on to explain how Governor Inslee’s actions stretch campaign promises made by candidate Inslee on issues of taxes and government efficiency.

Postman, upset with the fact that he did not have any control over an article that spotlighted Inslee’s broken promises, took to chastising Baker via email. Postman wrote,

“When you told me about your story last week, I said I looked forward to talking to you about it. You said that wouldn’t be necessary and you didn’t plan to ask us any questions because everything you needed came up at the press conference… I don’t believe we could have dissuaded you from your view. But I do think that subjects of news stories like this deserve the opportunity to decide whether to respond to such claims… and it is all the more disappointing because I specifically asked for a chance to respond.”

Apparently, Postman did not read the article all the way through because—as Baker points out in his response to the email—the problematic article does, in fact, quote Inslee in a statement that “directly rebuts all other suggestions he’s going against his campaign promises.”

Under an interesting impression of the level of influence his position affords him, Postman appears to have two issues with Baker’s story. First, Baker dared to highlight Inslee’s campaign broken promises. Second, Baker did not consult him prior to publishing the story.

You can view Postman’s email to Baker and Baker’s response below.