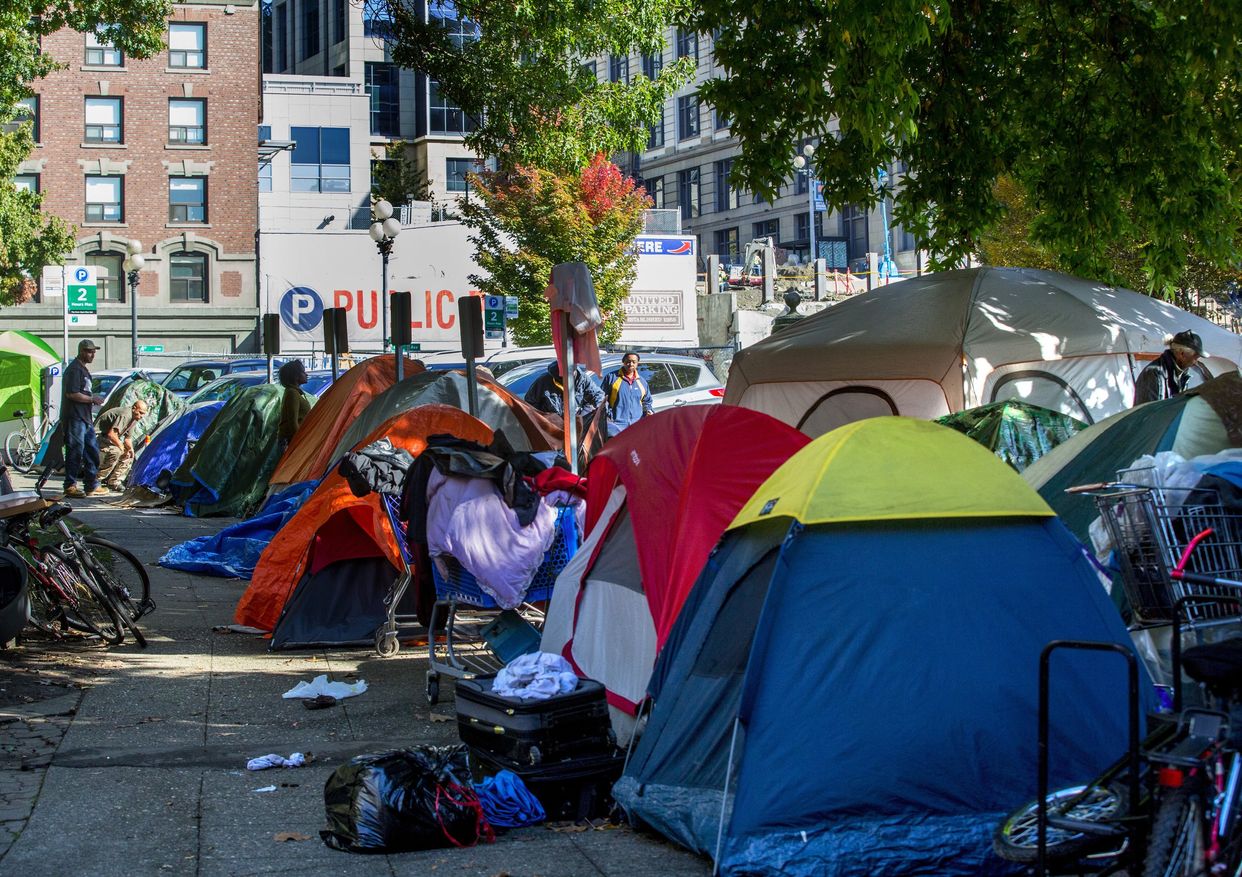 This week marked seven years since then-Seattle Mayor Ed Murray and Democrat King County Executive Dow Constantine declared homelessness an emergency and committed to spending millions more of taxpayer money on fixing the problem — yet everyone agrees the conditions are far worse today.

On November 2, 2015 liberal politicians gathered in front the TV cameras and committed millions in resources from all levels of government to solve the growing homeless problem in the city and in King County.  They took turns standing behind the microphones to pat themselves on the back for tackling this problem.  The region’s liberal establishment was going to demonstrate its compassion by spending taxpayer’s money to provide homeless people the help they need so they could all lead productive lives

Local businesses, non-profits and religious organizations also committed millions more to helping those who were suffering on the streets. A year later, the Puget Sound Business Journal estimated that more than billion dollars a year was collectively being spent to help the region’s homeless population.

It was determined that 3,772 people were homeless in King County at the time of the press conference.  Today, after spending billions and billions of dollars, the problems is even worse. The conservative estimate is that more than 5,500 are currently living in encampments, broken down RVs, or in shelters.

Mary’s Place is recognized by Seattle’s business leaders as one of the region’s most effective non-profits to help homeless families get the help they need so they can get off the streets..  It’s Executive Director, Marty Hartman, said her group had 200 shelter beds seven years ago when liberal politicians said they would solve the problem. Today Mary’s Place has 720 beds and that is not enough.

Remember, that for much of the past seven years, our national economic conditions were some of the best in our country’s history.  Thus this increase in homelessness occurred during good economic times.  Imagine how much homelessness would have increased if the economy was bad.

So if the homeless problem is getting worse despite government constantly spending more money, where is all that money being spent on?

KOMO News asked both the City of Seattle and King County for a breakdown for how the money was spent on homeless issues, and neither government was able to produce the information. When asked what progress has been made to help the homeless since 2015, the only achievement government officials mentioned was the creation of another large bureaucracy, the King County Regional Homeless Authority (whose CEO is making $250,000 a year and is already stating that the new agency needs a much larger budget).

King County Executive Dow Constantine has used the homeless crisis to expand the size and cost of county government.  He has gone on a spending spree buying hotels throughout King County to house homeless individuals (almost always without coordinating with local officials or working with the neighborhoods who will suddenly have a large homeless shelter in their community).

Sadly, these increases in government bureaucracy will never go away. Twenty years from now, the Regional Homeless Authority will be even larger, King County will still be housing individuals in former hotels, and all local governments will still be spending millions in taxpayer money to “help the homeless.”

Thus, in the seven years since liberal officials declared a homeless emergency and after hundreds of millions of taxpayer dollars (and billions more from other sources) have been spent, there are far more homeless individuals living desperate lives on the street.

The only achievement liberal officials can point to is they have developed a large ever-expanding bureaucracy which only benefits liberal politicians (more government employees means more union dues which are then spent by union bosses to help Democrats get elected or fund liberal special interest groups) but does very little to solve the problem.

Sadly, this is the epitome of a liberal utopia.