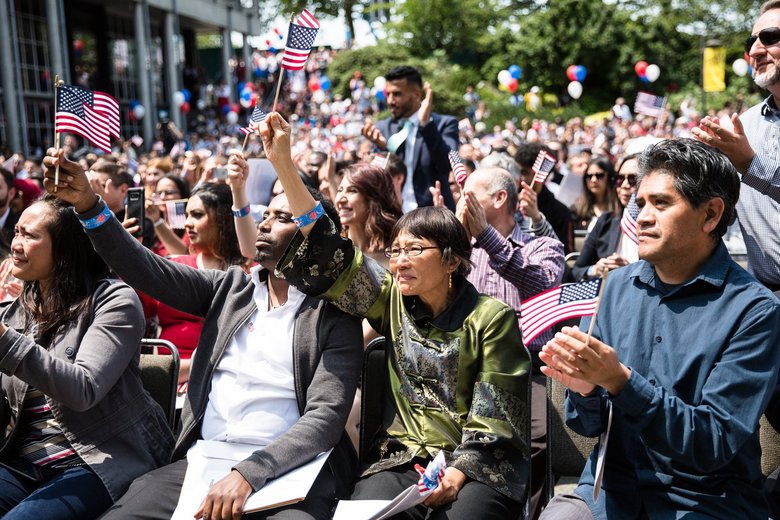 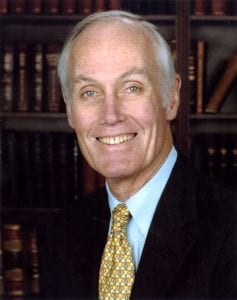 One of the greatest honors Slade Gorton had as a United States Senator, was being able to participate in the annual Fourth of July Naturalization Ceremony held at the Seattle Center, where hundreds of immigrants were sworn in to become American citizens. These people worked hard to become citizens of our country and they understood more than many, the uniqueness of America.

We thought it would be appropriate to take an excerpt from Senator Gorton’s 1992 inspirational speech to the new American citizens, as our country celebrates its 244th birthday.

America is a land of symbols.

There is our flag, its stars and stripes, recognized throughout the world. There is the eagle soaring through the heavens, strong, splendid, champion of our ideals. There is the Washington Monument, its spire piercing the horizon of democracy’s capitol. Even today, the Fourth of July, your day, is also America’s day to remember a battle waged and won for an idea.

These are now your symbols, as surely as they are any citizen’s.

But there is one symbol that is not only ours, though it is of us. One symbol that beckons the lovers of freedom wherever they might live. One symbol chosen by the students at Tiananmen Square as a hallmark of their own struggle against tyranny.

She is the Statue of Liberty, the Mother of Exiles.

Each of you have heard her celebrated supplication to “give me your tired, your poor.” It is no surprise the Statue of Liberty asks for the poor and for the tired, for it is the poor and the tired who still dream, and it is the dreamers who move the world.

Each of you heard, and you dreamt, and you came.

You came not to a place, but to an idea, that there was on this earth a land where, by hard work and merit, where one could live life on one’s own terms, where the streets are not, as is fabled paved in gold, but to which streets all had access in their individual pursuit of happiness.

Believing in yourself and in your ability to contribute, you came to the idea of America.

Many of you faced obstacles, as have immigrants throughout our history.

You did not heed the Statue’s call only to be intimidated by bullies who are deaf to the song of America.  You heard her call, and you came, to the only country which, by the will of its own people, stated in the documents of our government, has chosen to draw power rather than rancor from the differences among its citizens. We enrich and strengthen each other, in a way that happens no where else in the world.

Earlier I spoke the renowned words of welcome from the Statue of Liberty. But there is more to her ode, and a less known stanza holds the key to the contribution to America – and to the world – that you can make.

“Here at our sea-washed, sunset gates shall stand a mighty woman with a torch, whose flame is the imprisoned lightning, and her name Mother of Exiles.”

Her flame is the imprisoned lightening, imprisoned because until now, to realize the idea of America, it was necessary to come to America. The events of 1989 (Tiananmen Square and the Fall of the Berlin Wall) have changed that.   Instead of only beckoning your former countrymen to America as the greatest bastion of opportunity in the world, it is also within your custody to free the lightening of the torch, to spread the idea of America: that freedom and justice and opportunity and democracy are the inherit right of all people on this earth, and that the essence of America can exist anywhere.

It is your duty to spread this message, because the one American symbol that transcends America as a place, the symbol that represents the idea of America – is one of you.

The emblem of the dignity and worth of men and women was a gift to us from another country. The Statue of Liberty, the Mother of Exiles, was herself an immigrant.

The flame from her torch, set free by you, her children, will now not only beckon dreamers of freedom to our shores, but can illuminate the world with the promise of freedom everywhere.

My fellow Americans, welcome to your privileges and responsibilities as citizens of the First Universal Nation. You are our future, as you are the world’s.