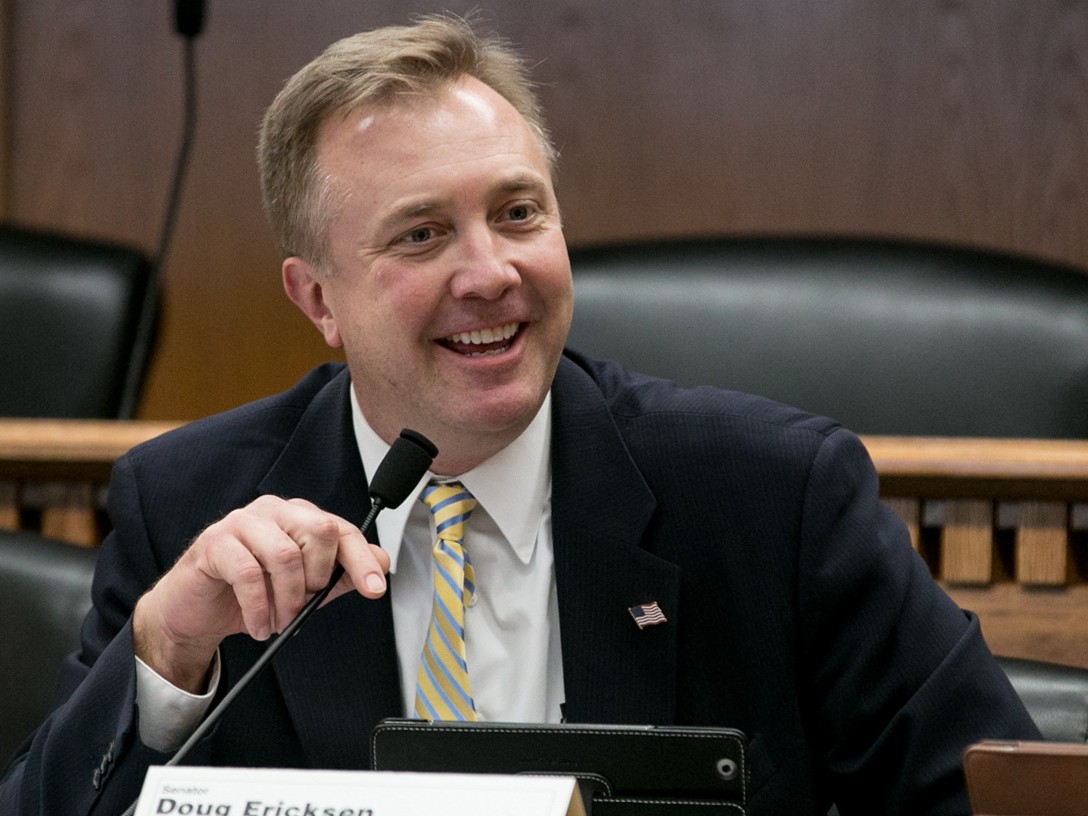 This week’s Newsmaker Interview is with Senator Doug Ericksen who has represented the 42nd District (Whatcom County) since 1999 – first as a House member for 12 years, and as a Senator since 2011.  Ericksen is the ranking minority member of the Senate Energy, Environment, and Technology Committee, where he sees many of the misguided and ineffective climate change policies of the extreme left and big government liberals.  Ericksen talks with Shift about breaching the Snake River dams and the Ballard Locks, low carbon fuel standards, Governor Inslee, taxes, and out-of-touch Seattle legislators.

In Whatcom County we have 2 oil refineries.  We create great jobs locally and we produce the energy the powers the economy of the entire state.  When I fight to protect our state’s refining capacity it is not just about my area, it is about the entire state.

A Low Carbon Dioxide Fuel Standard is essentially a cap and trade system for liquid fuels.  If your goal is to reduce human based C02 releases into the atmosphere, the LCo2FS program is very inefficient.  The cost per ton of Co2 reduction is very high compared to other methods.

It is very hard to construct an effective LCo2FS program.  Under current proposals, consumers would be paying up to 50 cents more per gallon of gas for limited results.

This extra tax on gas would not go to roads.

This is a great question.  I am not a climate alarmist, but I am a person who supports new technologies and a cleaner environment.

Gov. Inslee presents himself as a true believer in a radical man-made climate change. I can never claim to get into our Governor’s head to know his true feelings.

So I would say that Governor Inslee believes his environmental rhetoric because he really wants to believe it is true as a means to achieve his agendas.

This is an easy one.   Number one—I would veto any tax increase that did not get a 2/3s vote in the House and the Senate.  I would veto any budget that grows government spending faster than inflation plus population.  I would require that for any new regulation put into place, two regulations would have to be deleted.

I would also create rules for economic empowerment zones in Washington to expedite permitting for high quality manufacturing jobs in all parts of Washington.

No.  I could stop right there. When you live in a concrete jungle, I think you lose some understanding about what is means to live on real soil.  The radical elements that currently control Seattle politics scream for the removal of the Snake River dams or for massive buffers on rural streams.  They really do not know the massive environmental changes that were made to the City of Seattle to create the lifestyles they live today.

I think the Ballard Locks should be breached before we even talk about tearing out Snake River dams.  Seattle City Light gets their power from dams in my district in Whatcom County.  Perhaps we should free the wild Skagit River by tearing out these dams and lets Seattle find its power somewhere else.

I will not even try to explain the Denny Regrade—but those who know what it is know how much Seattle has altered their landscape.  I do not think the even 10% of the radicals in Seattle would even know what the Denny Regrade is without searching it on their phones.

Yes and no.  We have similar issues.  But our water issues, the scale of our farms, the products we produce, and many other aspects are different.

What we share in common is over regulation, over taxation, and a lack of freedom to produce the local food stuffs that urban people say they want

A great example of how out of touch Seattle legislators are was provided in the 2019 session.

The State Senate passed a bill requiring all dairy and berry farmers to report to the state the number of slaves they had on their properties.   This is insulting to farmers because we do not have slaves—obviously.

Here is the part you cannot make up—the prime sponsor of this legislation was from Seattle.  While there are no slaves on our farms, a law enforcement operation in the Seattle district of the prime sponsor freed several dozen young women trapped in the sex slave industry.

I am an environmentalist.  I am working on positive solutions to protect our environment while creating more opportunities to enjoy our environment.  Current policies in Olympia wasting limited resources to take us down the carbon rabbit hole while ignoring policies that could create better communities.