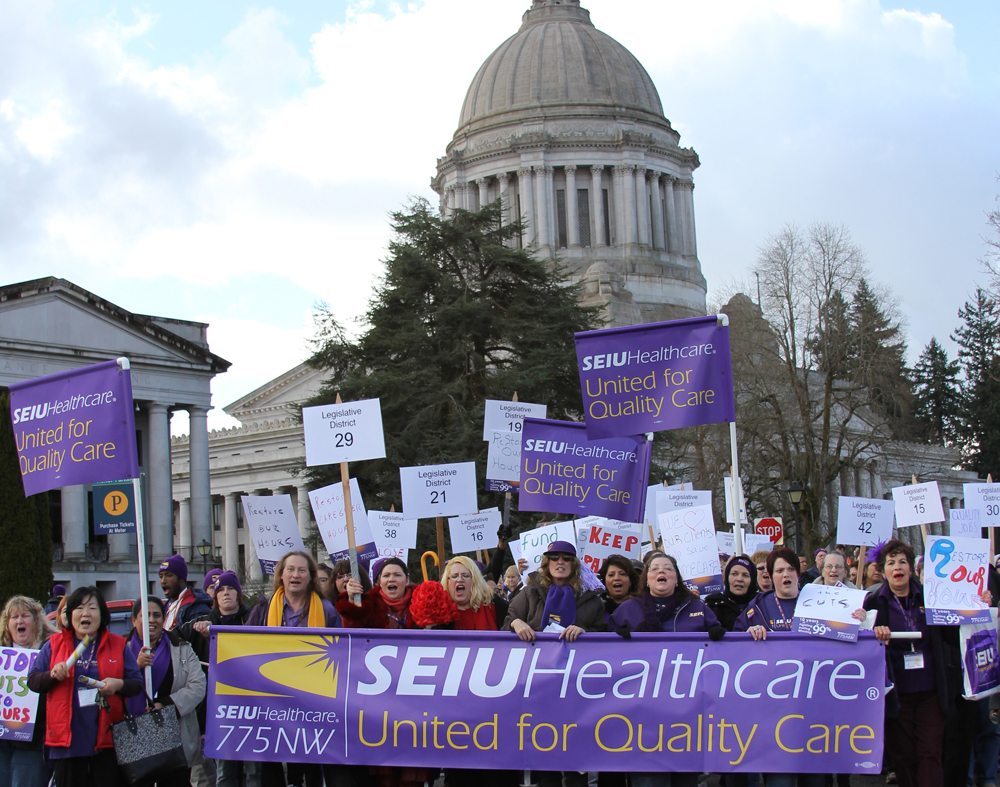 Under federal law (reaffirmed by the U.S. Supreme Court in Harris vs. Quinn last year), individual provider homecare aides (IPs) who are paid by Medicaid funds cannot be consider full-fledged state employees. Therefore, IPs cannot be compelled to pay union dues and fees if they do not wish to join a union.

Unfortunately, that’s not what the Service Employees International Union (SEIU) is telling IPs. The Freedom Foundation has obtained a video revealing a SEIU representative “using state-mandated, taxpayer-funded training sessions to mislead a class of IPs into believing membership in SEIU 775 is mandatory.” The following is a transcript of the exchange:

Class member: “Are you required to join the union?”

Williams: “A caregiver? Unless you’re being privately paid, yeah. And you want to be in the union, you really do. ”

Class member: “I didn’t want to be in it, because I just take care of my sister [inaudible].”

Williams: “Yeah, if you were being privately paid then it wouldn’t matter. Because if you work either directly through the state from DSHS or if you work for an agency, yeah, you’re part of the union. But they do do a lot of good.”

According to the Freedom Foundation, under collective bargaining agreements with the state, SEIU 775 representatives may make their case for union membership to classes for the first 30 minutes of the mandatory 75-hour training sessions. Additionally, the state pays IPs for their time spent at the union presentation. But, that’s not what happened in this case. The Freedom Foundation,

“In this case, the SEIU 775 representative did not show up for his 30-minute presentation. Instead, the pro-union comments came from the instructor. In accordance with I-1163, an SEIU-funded initiative passed by voters in 2011, the state pays the SEIU Healthcare NW Benefits Training Partnership to provide the training.”

This was not the only reported incident of SEIU representatives taking advantage of training sessions to promote union membership. The Freedom Foundation,

“The FIRST thing he (SEIU 775 organizer Jose Manzano) made clear is, “You know that by becoming a care provider you joined a union, right?” He then spent the next half hour extolling the wonders and benefits of unions. He then handed out a legal-sized (membership) form and indicated we all needed to sign it for their records. Some objected to signing it, as they had signed up at intake, but eventually all did I think, except me.”

SEIU 775’s deceptive actions are in keeping with previously reported incidents. The Supreme Court’s Harris vs. Quinn decision resulted in a wave of union panic and obvious attempts to skirt the law ensued. These attempts have included a plethora of deceptive tactics meant to hide the truth of IPs’ rights in the workplace.

You can check out how the Freedom Foundation is working to counteract SEIU 775’s deceptive tactics, and the opposition it has encountered as a result, here.

And, you can check out the video in question here.