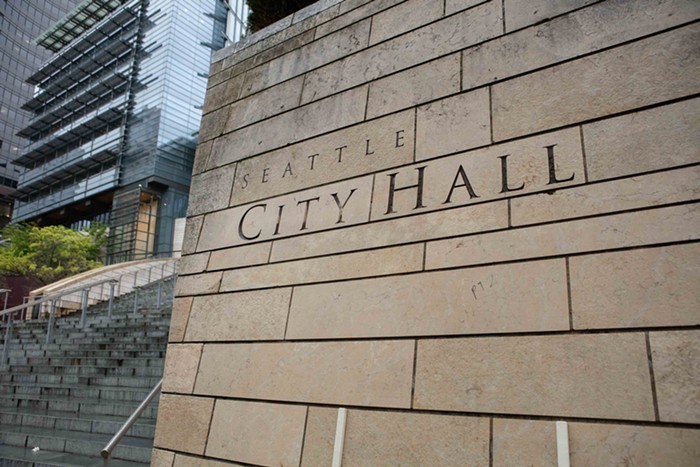 This week’s Newsmaker Interview is with David Preston of “Safe Seattle,” an organization which offers a very vocal critique of the failed homeless and public safety policies which have severely damaged the once “Most

Livable City in America.”  Safe Seattle’s following has grown during the pandemic and the subsequent violent riots committed by leftist activists, as residents seek viewpoints which the local media fails to recognize. Every day, Safe Seattle posts numerous stories about what is happening on the front lines, as local residents and businesses are faced with the growing crime, drug, and sanitary problems resulting from Seattle’s elected officials unwillingness and inability to solve the homeless problems their own policies have created.  Shift often reposts Safe Seattle’s materials and we believe many of our readers will appreciate the perspective the site provides.

Tell us about “Safe Seattle.” When was it started and what were the reasons behind its creation?

Safe Seattle was started by Harley Lever in December 2015. Harley filmed the aftermath of an RV/meth fire near his condo in Seattle’s Interbay neighborhood and posted the footage on Facebook. News of the vagrancy crisis in Seattle wasn’t getting out to the wider world at that time, so the video went viral, and based on that, Harley reckoned there’d be sustained interest in the issue. And he was right.

Harley’s style was to share news articles about what other cities were doing right to address the problem of drugs, 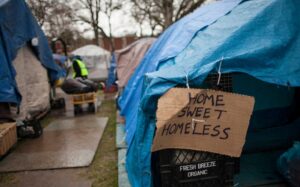 crime, and vagrancy. When I joined the page six months later, I started talking more about what Seattle was doing wrong. I put the focus on political corruption and started pushing some of my longer essays that I’d published on The Blog Quixotic. I recruited other writer-editors to the page, and we began publishing testimonials where readers would talk about how the vagrancy-fueled drug and crime problems were affecting them personally. Then we rounded out the page with a touch of cynical humor, and things took off.

Today, nearly six years on, we have over 18,000 followers, most of them with some connection to Seattle. Politicians and media people follow the page because it’s a barometer of what people here really care about. We’re edgy and relevant, like the Stranger used to be, but unlike them, we’re honest about our biases. We support police and we don’t feel sorry for drug users and criminals. We believe that public safety and business, both big and small, are key to the long-term survival of the city.

You always appear to have plenty of content for your site.  Is this because there are so many problems in Seattle or is it because you have many people contributing stories/ideas?

It’s both. Seattle government is growing ever more corrupt and incompetent, and local media isn’t covering that story, so the burden falls to us. We often have 10 or more posts per day, all with original content from our editors and readers. And even with that amount of material, there are five more stories every day that I wanted to cover but just couldn’t get to. Readers will contact us with a story idea and I’ll say, “Thanks, but we already covered it.” “I’m sorry, I missed that,” they’ll say, but I’m like, “Hey, don’t feel bad. You’d have to be glued to the page to keep up.”

I spend several hours a day writing, and several more working leads, managing content, and editing reader contributions. Last year we brought on a superstar writer named Mildred. She’s brought a new voice to the page that many readers prefer to mine, and I’m fine with that because it brings more people to the page. The other admin-editor, Mike, divides most of his time between wrangling Facebook bugs and housekeeping. He’s in charge of removing trolls and people who don’t follow the guidelines.

You never back down from the region’s liberal establishment in your posts.  Has this caused any difficulties?  Have you heard from any of the city officials you criticize?

Say what you like about the “liberal establishment,” but if they weren’t running the city into the ground, I wouldn’t have anything to do. As a formality, I’ll give you the spiel I give readers who toss the word “liberal” around casually. I have no problem with ordinary liberals; it’s leftists I despise. And by leftist, I mean someone who tries to keep 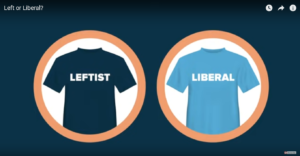 pushing society leftward, all the way to the logical endpoint, which is communism. Unlike liberals, leftists don’t support the Constitution and don’t try to find common ground with moderates or conservatives. If you want to know more about the difference between classic liberalism and leftism, Dennis Prager made a good short video about it.

In Seattle we don’t have a liberal establishment; we have a leftist one. And that’s the problem.

Do I hear from the city officials I criticize? No. I know some of them follow the page and are willing to read painful truths about themselves, but I never hear from them. Maybe they’re afraid that I’ll kiss and tell. Or maybe they’re just afraid of me. I can be intimidating person, but that goes with the territory. To stand up to leftist hate, you’ve either got to have thick emotional callouses or you’ve got to hit back. And I choose to hit back.

One notable exception to the “Don’t Talk to Preston” rule is my friend Lisa Daugaard of the LEAD program, who still speaks to me despite my being brutal to her on Safe Seattle. There are a few other exceptions, but I’m not at liberty to name them.

You told me that you have dealt with the Antifa radicals who rioted in Seattle.  They appear to be somewhat quiet right now.  Do you expect them to return to Seattle and cause more damage to our community?  Why do you think Governor Jay Inslee and Attorney General Bob Ferguson are so reluctant to criticize Antifa’s violent actions?

Antifa is a cat’s paw for communists like Kshama Sawant and Tammy Morales. Now that the furor over George Floyd has died down and the pretend anti-fascists have served their purpose of driving the leftist agenda forward, the genie is back in the bottle. But the bottle is still there, waiting for the communists to give it another rub whenever they feel 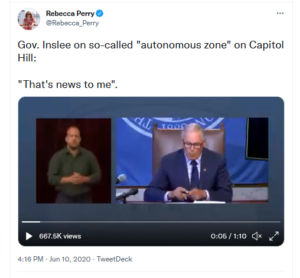 like they need to. One would like to think these anarcho-cretins are aging out of the game, but alas, as soon as one generation of cretins leaves the stage a new one pops up to take its place.

Anarcho-cretinism (i.e., Antifa) is a largely Seattle phenomenon, so don’t expect Jay Inslee to do anything about it, because that guy couldn’t find Seattle on a map. (He said he’d never heard of CHOP until it was over, remember?) As for Ferguson, you already know why he’s not doing anything. As a leftist himself, Ferguson largely shares Antifa’s worldview, but in any case, his gig is to go after big, solid targets like Tim Eyman or Greyhound Corporation. These are discrete entities he can sue the shit out of. By contrast, Antifa is just this big squishy blob of evil. They don’t have executives Ferguson can serve papers on or a bank account he can drain, so even if he was opposed to them philosophically (which he’s not) there’s nothing he could do about it.

Most of your posts deal with Seattle’s never-ending homeless/drug/crime crisis. If you were made king of Seattle for four years, what would you do to solve the problem?

If I was king of Seattle for four years, I’m sure I’d spend part of my first year putting down rebellions. After that was out of the way, I’d bring the police back up to the strength and put our “prolific offenders” in jail.

To address the “homeless crisis,” I’d do everything I’ve been recommending on Safe Seattle. For instance, I’d do a thorough survey of people living unsheltered on the streets, in tent camps, RVs, and in shack villages to see where they’re from and how and why they came here. (Did someone put you on a bus to Seattle? Why did they send you here? Where’s your family at?) Then I’d determine what their individual resources and needs were (Do you have relatives who could help you? Any job skills? Do you have a disability? Are you using illegal drugs?). I’d offer them housing and services, but the housing would be contingent on them accepting the other needed service. If someone refused to get off drugs and get a job, for example, they’d have to leave the kingdom and go to some other kingdom where vagrancy was tolerated. But they couldn’t live in the park.

While I was getting people off drugs, I’d outlaw organizations like the People’s Harm Reduction Alliance (so called)

that encourage people to stay ON drugs. Then I’d reinstitute drug court, which is a useful tool for getting people to accept treatment. My message to those who commit crime to support a drug habit would be simple: Get into a treatment program and go straight. Or go straight to jail.

That would take care of my first two years. In my third year, I’d require all the homeless service providers to open their books and justify their budgets. Any of them that were guilty of fraud would be put into receivership and their crooked execs would be thrown into the dungeon, or into stocks in the public square if they preferred. The most problematic organizations like DESC and SHARE would probably go away, but some of the others might survive, though probably under different management than they’re under now. All of them would thenceforth be required to keep their finances fully open to the public, and their facilities would be subject to regular inspections BY the public, so the citizens could see what their money was being spent on.

My fourth and last year as king would be devoted to preparing the city for a return to democracy. By that time, I would already have cultivated people in the various neighborhoods who were ready to step forward and lead the city back to health. I would reinvigorate the spirit of bipartisan public engagement that once made Seattle such a nice place to live. Somewhere along the way, we lost that spirit, and in doing so, we ceded control of the city to the leftists.

What is next for Safe Seattle?

I expect the page to carry on and keep growing as it has been doing for at least the next two years. That is, unless Facebook shuts us down for being too honest or for hurting too many leftist feelings. If the communists consolidate their grip on the city by getting people like Nikkita Oliver and Nicole Thomas-Kennedy into office, then you can expect to see Safe Seattle shift into more of a resistance mode, where we’re organizing citizens to ignore, defy, or subvert un-Constitutional government actions. The HEAT Team is an example of what we’re doing in that respect right now. The HEAT Team does government’s job by removing hate graffiti from public spaces. We paint over anti-cop messages or messages that encourage violence. If you want to support that effort, go to https://www.gofundme.com/f/clean-up-seattle.

How can people view your posts?

For longer essays and stuff we can’t post on Facebook because it’s too graphic, there’s my blog at https://roominate.com.

They can contact me on [email protected] or via the message board at Safe Seattle. (Use the “message” link in the upper right-hand part of the screen.)