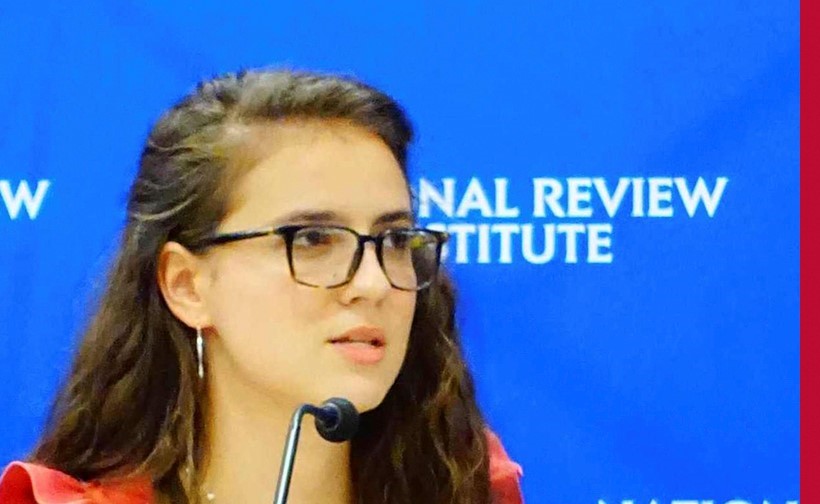 National Review staff writer Alexandra DeSanctis is this week’s Newsmaker Interview. She is a graduate of Notre Dame University and a previous William F. Buckley Fellow. Alexandra will be the featured speaker at the upcoming Roanoke Conference – January 24-26 in Ocean Shores. (You can view the agenda and register for the conference by visiting www.roanokeconference.org.)

1) You are relatively new to political commentating at the national level.  What should Roanoke attendees know about you before they hear you speak?  Have you been to the Pacific Northwest before in the middle of the winter?

I’ve never been to the Pacific Northwest at all! I’m planning to visit all 50 states eventually, and when I visit Washington that will be my 32nd state and my first new state of 2020. My most recent new states have been Minnesota, Maine, Arizona, Nebraska, and North Dakota. Other than that, I grew up on the East Coast, in both New England and the Washington, D.C., area, and I went to college (Notre Dame) in the Midwest.

2) You have recently written on how Hollywood is financially dependent on movie sequels since they have run out of ideas.  Is this lack of creativity a reflection Hollywood’s lack of diversity when it comes to political thought?

I think that’s certainly part of the issue. Movies don’t need to be political, and in fact I prefer when they aren’t, but when films have a political overtone these days it’s almost always dominated by a left-wing perspective. I think the root of the problem with Hollywood’s lack of creativity is that studios and producers are certain that they can make a huge profit if they churn out yet another superhero movie, but it’s a much bigger risk to finance a project where they aren’t not sure if the viewers will turn up. I understand their hesitation, but I can’t help but wish there were a greater variety of options!

3) Lack of diversity appears to be a trademark of the modern progressive movement in our country.  What are your thoughts about pro-life women being treated differently by the media and even excluded by the women’s movement?

After several years of writing about the pro-life movement and beginning to give talks across the country, I think that the Left and the abortion-rights movement in particular are very threatened by the existence of articulate pro-life women. So much of the argument in favor of abortion relies on the claim that women need abortion, that women are better off when they have unlimited access to this procedure. Women who say the exact opposite — who say that women deserve better than abortion — aren’t easy to write off, and we are better able to undercut their case. That’s why we are often ignored or even attacked as being “gender traitors” or harming other women by what we do.

4) Recently Republican lawmakers have made proposals regarding paid family medical leave to counter the very expensive ideas being proposed by the Democrats. Ivanka Trump has been promoting plans for the Administration.  How do you see this issue playing out during the election year?

I think having a federal paid parental leave program — which would enable new parents to take paid time off work after the birth or adoption of a new child, even if their state or employer doesn’t offer a paid-leave plan — is a fairly popular idea. I’m pleased that a number of Republican senators have developed proposals for conservative forms of parental leave that help parents take leave without increasing the federal budget or creating a new entitlement. As long as this is done in a budget-neutral way, I think paid leave could be a good issue that allows Republican politicians to answer the concerns of parents and show that they want to build a pro-family party.

5) We look forward to hearing you at the Roanoke Conference.  What do you plan to speak about during your presentation and why have you chosen the topic?

My talk will be focused on the state of abortion policy in the U.S., and in particular the way that the Democratic party has become more extreme on the question of abortion over the last two decades. Not very long ago, Democratic politicians said they believed abortion should be “safe, legal, and rare.” Today, most politicians on the Left speak about abortion as if it were a social good that needs to be celebrated. That stance is very much out of step with the majority of Americans, and even with most Democrats. I think this is something that too few Americans are aware of, mostly because Democrats tend to describe their abortion policy using unclear euphemisms and because the media report on abortion in a highly misleading manner.