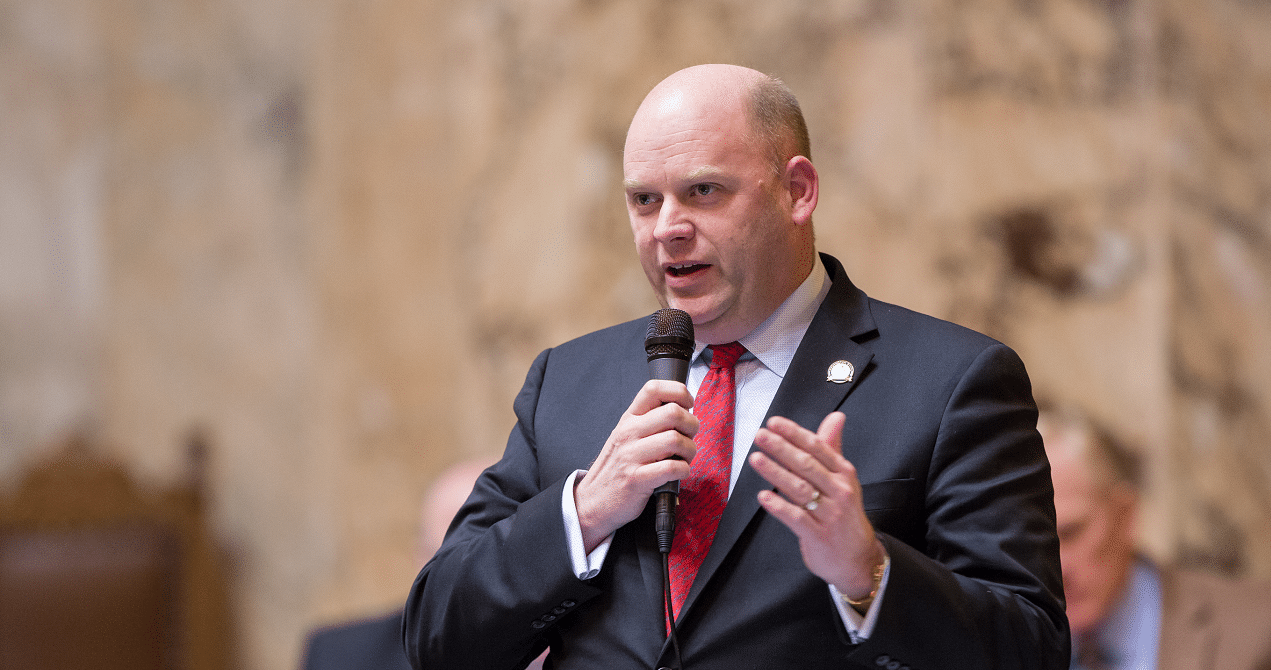 Shift’s Newsmaker Interview is with Washington State Representative Drew MacEwen (R – Union), the five-term legislator who yesterday after Sine Die announced he will be running to replace the retiring conservative Democrat Senator Tim Sheldon in

the 35th Legislative District.  Representative MacEwen is among the leadership team of the GOP House Caucus and has become an expert on state budgetary matters as a member of the House Appropriations Committee.  We spoke with the representative earlier this week as the 2022 legislative session ended and he shared his thoughts on the Democrats recklessly spending nearly all of the state’s $14 billion surplus and the Democrats’ failure to provide “fixes” for either their disastrous Long-Term Care payroll tax or their hastily developed “police reform” package which resulted in skyrocketing crime rates throughout the state. Representative MacEwen pulls no punches when he describes the Democrats’ refusal to pass emergency powers reform, calling it “an utter breakdown in a republic form of government.”

First, as the legislative session comes to an end, what are your observations about the Democrats’ supplemental budget?

Once again they have wasted a golden opportunity.  Coming into the session our revenue forecast gave the budget a $14 billion surplus.  Instead of providing any meaningful tax relief to our citizens they spend nearly all of it and leave an ending fund balance of just over $200 million.  Put that in perspective…a family making $75k/year would have just $230 available for an emergency.  In a time with rising energy prices, 7% inflation, and global geopolitical uncertainty the Democrats chose a reckless and irresponsible path with your tax dollars.

Last week you proposed a measure for Washington State agencies divest themselves of Russian interest. How would that impact state government and how quickly could this take?

At the end of the day I believe it would be a negligible impact to state government.  It would probably take several months to fully implement.  I am pleased to see that our state investment board moved to prohibit any investment (via the various retirement funds the state manages) in Russian companies.  Our actions as a state would not be noticeable by Russia, but it is important that Washington add its voice to the global condemnation of Putin and his government.

What are you thoughts now on the state’s Long-Term Care payroll tax which Governor Inslee and the Democrats say is now “fixed” and ready to be implemented next year after the elections?

It is not fixed.  They punted the issue to get past the election, plain and simple.

The Democrats 2021 “police reform” package caused the state’s crime rate to skyrocket. Democrats promised to “fix” their legislation during the 2022 session.  What are your views on their repairs and what more needs to be done?

They single handedly destroyed the ability of police to enforce the law.  Their “fix” put a band aid on an amputated leg.  Either we are a state of law and order, or we are not.  The Democrats have chosen not to be for law and order.  Property crime is up, violence is up, and more decimalization has occurred.  We need to empower law enforcement and have accountability. chamber. What are your thoughts on the failure of the legislature to pass meaningful emergency powers reform?

The Democrats have never been serious about emergency powers reform.  The state of emergency has enabled the governor to implement via proclamation a number of their social desires especially when it comes to housing.  Our emergency powers were written over the past 50 years with an eye towards a major natural disaster or all out war from the tensions of the cold war.  No one ever really envisioned the scenario of a pandemic that would have no end in sight.

Finally, if you were given the opportunity to pass one bill in the legislature, what would it be?

There are so many!  But I think looking at the current situation we need true comprehensive emergency powers reform.  A system that forces an end unless the legislature concurs to an extension.  I truly fear that the governor has no intention of ending the state of emergency any time soon.  Sadly, we will probably be one of the last states to end it so that Inslee can maintain as much control as possible.  He has never been interested in engaging with the legislature on any issue, much less this.