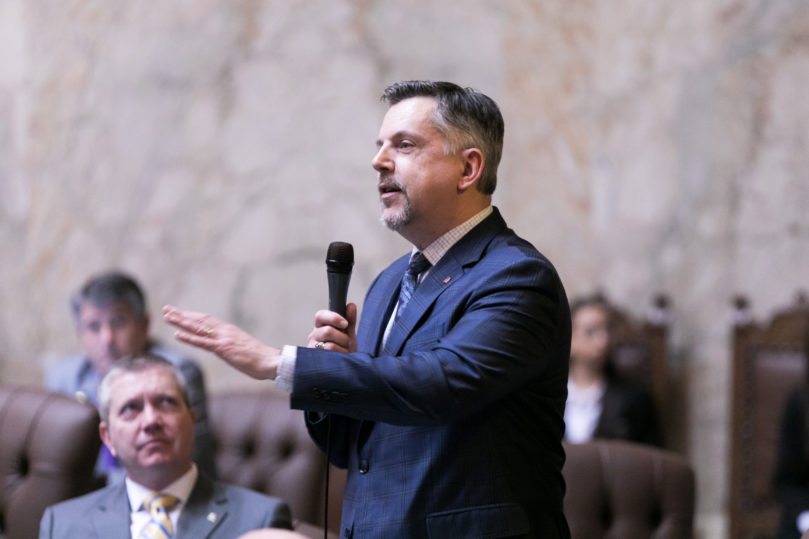 This week’s Newsmaker Interview is with Representative Andrew Barkis (R-Yelm) who has served in the legislature since 2016. Barkis operates a property management company and is one of the legislature’s leading experts on housing issues. During the coronavirus outbreak, Barkis has been critical of the many partisan decisions made by Governor Inslee and he has been a vocal advocate for the Washington residents who have been poorly served by the governor’s mismanagement of the Employment Security Department.

Barkis shares his thoughts with Shift readers on the recent Supreme Court decision that stated Governor Inslee overstepped his veto authority, the need for a special session, Inslee’s pay raise to state workers (while others are financially suffering), the governor’s short-sighted eviction ban, and Speaker Laurie Jinkins.

Last week you were part of the Republican response to the Washington State Supreme Court’s ruling that Governor Inslee has overstepped his authority in his line item veto of the 2019 transportation budget legislation.  Why was the court’s ruling so significant?

This is significant as it clearly defines that the governor cannot arbitrarily remove line items of the transportation package.  This ruling prevents him from picking and choosing, based on his own biases, what should or should not be in the overall transportation budget.  It also preserves the negotiations and workings that occurred between both the minority and majority parties during the comprehensive development of the overall transportation budget.  Lastly, by not being constrained by fuel types, it creates fairness for rural transit agencies to compete for grants and funding, ultimately providing transit options for rural riders.

You have been very vocal about the need for the governor to immediately call in the legislature for a special session.  Why is this so important?

There are many reasons for this, and I will highlight a few.  To begin, our state is faced with nearly a $9 billion dollar budget deficit.  Under the requirements of the state’s constitution the legislature is required to maintain a four-year balanced budget.  The longer we wait to address this deficit the more difficult it will be to administer the requirement the legislature is held to by law.  In addition, the longer we wait the larger the deficit will become as state agencies will continue to spend funds as approved in the previous session until directed to reduce the expenditures, this can only happen in a legislative session.

The earlier we focus our efforts the better we can preserve needed social programs, it is known without a shadow of a doubt there will be significant program cuts but to postpone the implementation of a special session is nothing more than political gamesmanship.  In fact, Inslee made public comment on July 2nd he was not sure there would be a special session.  This in-itself demonstrates the governor would rather sideline legislative collaboration and the opportunity to stabilize our budgets until after the November elections.

What are your thoughts on the Governor providing a pay raise to state workers and then giving them furlough days off to make up for the budget impact of the pay raise?

I completely disagree with this move. There are tens of thousands of unemployed citizens in this state who have still not received unemployment benefits.  These very people are struggling to put food on their tables and make their financial commitments.

This also beckons back to the fact of the governor’s choice of who was deemed essential and who was not.  Up until just these last few weeks, not one state employee felt the impacts of unemployment as they were deemed essential even when their respective agency was closed.  The challenges and failures associated with the Employment Security Department are yet more reason to have a special session now!

You are one of the legislature’s leading experts on the region’s housing shortage.  It is likely too early to tell, but how do you predict the coronavirus outbreak has impacted our state’s housing situation?

Although we do not know the full effects at this time, I believe there will certainly be negative consequences.  One looming and significant issue that is certain to create negative side-effects is in direct correlation to the Governor’s proclamation preventing evictions.  Unfortunately, this proclamation designed to keep people in their homes will certainly force a reduction in future rental housing availability.

We are now receiving numerous emails and calls from property owners who are now unable to meet their own financial obligations as many who rent have taken advantage of the no eviction proclamation and simply do not pay rent.  After all, why pay if you cannot be evicted.

This policy of the Governor’s was completely short-sighted and provided absolutely no relief for property owners.  The property owners who are able to maintain their ownership may ultimately have to increase rents to compensate for their losses or simply choose to sell and exit the rental market altogether.

As a member of the minority in the House, has there been any difference for you with Laurie Jinkins replacing Frank Chopp as Speaker?

Honestly, we simply have not had enough time to work together but I am hopeful that the future will bring more across the aisle cohesiveness and collaboration.  At a time like this, we need to be able to work more effectively together and at some point, I am hopeful that Representative Jinkins and her caucus will support a special session, our citizens deserve it.

You can contact Representative Barkis on legislative/state matters at: [email protected]

The Friends for Andrew Barkis campaign website is: https://electandrewbarkis.org/