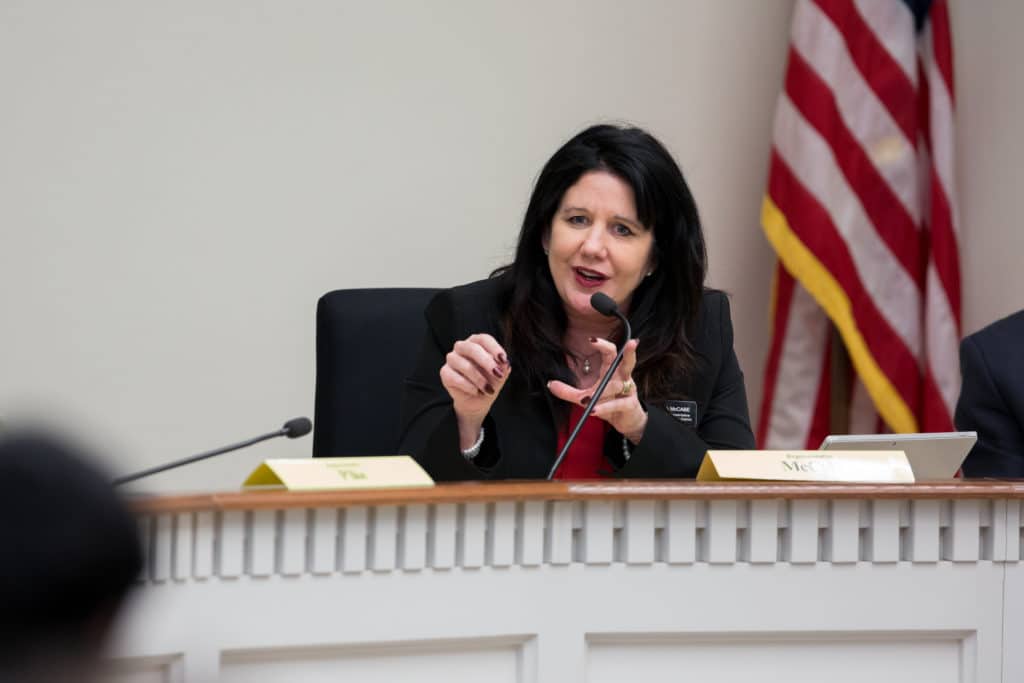 Shift’s Newsmaker Interview is with Representative Gina Mosbrucker (R – Goldendale), the Ranking Republican on the House Public Safety Committee and one of her party’s leaders in attempting to fix the many

serious flaws within the Democrats’ 2021 “police reform” bills.  The fourth-term legislator, who owns and operates a hotel and performing arts studio in Klickitat County, is leading the effort during the 2022 legislative session to pass bills in the Republicans’ “Safe Washington” package.  Representative Mosbrucker describes in our interview her reaction as Democrats hastily wrote and passed their reform bills and the negative impact that legislation had on the public safety of Washington residents.  The representative outlines what legislation is part of “Safe Washington” and what her other priorities are for the 2022 legislative session.

During the 2021 legislative session, Democrat lawmakers rewarded those who rioted in Seattle by passing the liberal activists’ demands in their “police reform” package.  What were your feelings about the process the Democrats used and the resulting set of bills?

I felt extremely concerned for the safety of our communities and law enforcement. Police run into danger; you and I run out. It was as though the handcuffs were removed from the criminals and put on those who protect us and serve as police officers.

Our worst fears due to this unclear, poorly written legislation package, came true. Convicted criminals are being released from our prisons while crime and fear is at an all-time high. Majority Democrats went too far with their anti-policing bills.

Almost immediately after the Democrats’ laws went into effect last summer, the media in all parts of the state was filled with stories of suspected criminals escaping pursuit.  What was your reaction when you heard these stories?

It was heartbreaking. Republicans had numerous amendments that struck balance between apprehending a murderer or kidnapper and safety of the public during a pursuit. Our amendments were voted down.

We are continuing to fight for law enforcement to be able to apprehend those who harm others and commit crimes in our state.

Legislative Republicans have put forth “Safe Washington,” which is a collection of bills set out to fix the problems created by the Democrats’ package and from their reaction to the Blake decision.  What are the highlights of the Republicans’ proposed legislation?

The Democrats have said that their 2021 “police reform” package only needs a few small adjustments.  First, do you believe that assessment from the Democrats is correct, and second, what are the major differences between the Republicans’ solution and the Democrats’?

I do not believe that “a few small adjustments” will be enough to fix the Democrats’ 2021 police reform package. It is my opinion that Republicans want professional, equitable and clearly written law enforcement protocols in place throughout Washington state. Any bad officers who use excessive use of force, do not follow protocol, or break the law, should be punished to the full extent of the law. The Democrats’ package punished and removed important tools for all police officers — most of whom do exceptional work. This is sadly allowing criminals to mock the system.

Do you believe you will be able to receive some support from these Democrat legislators for bills within “Safe Washington,” or will they refuse to break from their caucus?

The people we are blessed to serve want and need SAFE homes, schools, neighborhoods, and communities. With a $10 billion surplus of funds in the Washington state budget, there should not be any new taxes. We should repeal taxes and give refunds back to Washingtonians.

These past 22 months have been extremely difficult. We have the opportunity to make a difference in the lives of those we serve. I am hopeful some Democrats will break from party line votes to listen to the people. A few Democratic legislators indicate they want to help – i.e., legislation addressing fentanyl and missing and murdered indigenous persons. Sadly, I fear there are not enough of them to cross party lines and swing the pendulum of politics back to center.

Remembering that over 90% of the policy areas we work on are non-partisan issues. I would argue that public safety, health care, education, agriculture, even taxes should never be political. They affect all of us. Unfortunately, politics get in the way of good policy. I hope to change that.

Besides the bills within “Safe Washington,” what are your other legislative priorities for the 2022 session?

My additional priorities include: