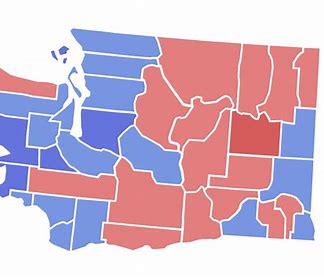 The Shift team stayed up late Election Night watching the returns, as usual, and for a change it wasn’t because we were trudging through Washington State’s very incomplete results, trying to determine where the numbers would go in in the coming days/weeks. Instead, it’s the national chaos that consumes our attention – and we’re sure you already have your own source for watching the presidential race – as the Evergreen State seems rather boring by comparison.

If you want to follow along, the two websites we’re watching are Politico for national news and the Secretary of State’s office – which is looking, very thankfully, like it will stay under Kim Wyman’s leadership and extend the GOP’s winning streak in the office to 56 years – for WA numbers.

Unfortunately, again the good news for conservative voters largely ended at the Cascades (except for Secretary Wyman). Nationally, Sen. Mitch McConnell looks certain to return as the Senate Majority Leader, even without waiting for Georgia’s January 5 runoff for at least one current Republican seat. In the U.S. House, the blame-game is already consuming Speaker Pelosi and her leadership team, as not a single GOP incumbent trails today, and more than a half dozen Democrat incumbents lost and another half dozen are trailing, though a diminished Democrat majority is still projected for the House.

And, in an under-reported development, Republicans are in position to gain control of state legislative chambers across the country, especially important in advance of the start of the congressional re-districting process next year.

But, here in WA we became a little bluer, as Democrats are currently looking to net one State Senate seat, with leads over GOP incumbents in Island County’s 10th District and Pierce County’s 28th, while Democrat incumbent Dean Takko trails badly in SW WA’s 19th. In the State House, which is twice are large, the current margin is doubled as well – a net two House seats. As in the Senate, a Democrat incumbent (Blake) is behind in the 19th,  but Democrats have a lead in the open seat (left by Rep. Norma Smith) in the 10th. Additionally, Democrats have leads over GOP incumbents in the 17th (Clark County) and 42nd (Whatcom County).

Secretary of State Wyman had predicted that the state would count over 60% of the vote on election day, and indeed the numbers are record-breaking with more than 3.3 million votes (68.6% of registered voters) counted last night. If you assume an overall 85% turnout when all the numbers are counted, that would mean we (only) have another 800,000 to count (and 540,000 of those are already reported as in-hand), meaning our state is ahead of the after-election-day counting game we are so used to here.

In a development that will bear watching as the next legislature gets ready to raise your taxes, the Democrat Divide grew into a chasm election day. Far-lefties like outgoing State Rep. Beth Doglio (10th Congressional) and uber-liberal and returning State Senator Marko Liias (Lt. Governor) were crushed in their Democrat vs. Democrat contests. But the increasingly louder “progressives” switched those results in state legislative contests, with unqualified newcomers winning the intra-party argument that the incumbent Democrat was not socialist enough by leading veteran House member Zack Hudgins in Renton’s 11th District, and State Senator Mark Mullett in East King County’s 5th.

That said, the legislative races are so set that, out of 124 races, only the 5th District Senate race is within 1,000 votes. None of the nine statewides or congressional races is within 7% points, except Secretary Wyman (and she leads by over 100,000 votes and 3.7%).

So, few eyes will be on Washington’s races in the coming days.