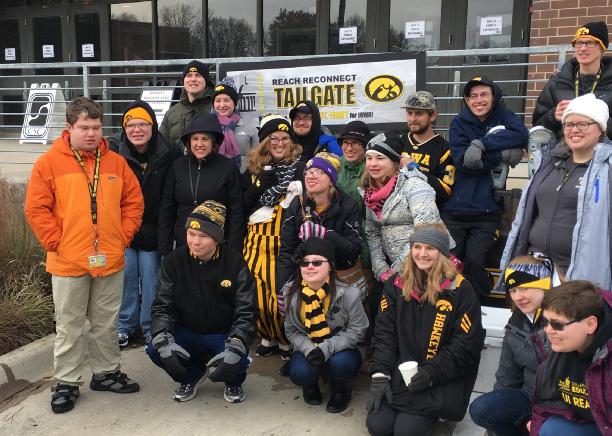 Tony Williams is a Bellevue public affairs consultant and former chief of staff for U.S. Senator Slade Gorton.  He often writes about his son Josh (in the orange jacket on the left in the above picture) who is a student in the University of Iowa’s REACH (Realizing Educational and Career Hopes) program which assists young adults with intellectual, cognitive, and learning disabilities to lead independent lives.  In his latest “Journeys with Josh,” Tony talks about how fighting for those with disabilities opened his eyes to others who are fighting for inclusion in our society.  Tony has graciously permitted Shift to republish this article.

The head of Josh’s program at the University of Iowa is a wonderful Black man by the name of Bill Loyd. Over the last two years, Bill and I have become colleagues and friends as we work together to promote the UI REACH program (and college opportunities in general for young adults with developmental disabilities) around the country, and also think about what independent life can be and look like for Josh.

During one of our talks, I was telling him how when Josh was a teenager, he just loved Black women. Bill started laughing as I was telling him how vigilant Cindi and I had to be when we were out in public with Josh during this phase of life because he would be off in an instant if he saw a Black woman. He would see a Black woman, get really excited, and then dart off towards the woman with a big smile, a super happy greeting, and a long list of questions.

As Cindi and I raced after him, the same thing happened almost every time. The women in question would light up with a smile and start talking sweetly to Josh. They would answer his questions, and then we’d walk up and apologize and start to walk away, and the women almost always would say something like, “oh, he’s all right. I don’t mind.” And then they would often say something to Josh like, “thank you for saying hello, handsome.”

So, I asked Bill this question, “why are Black women always so relaxed and nice to him in these situations? It’s like they almost welcome the interruption from him.”

Bill said, “because they know that he knows about the struggle. Josh’s struggle and their struggle might be different, but it’s all part of the same struggle.”

At that moment, I became more than a dad of a son with special needs, who had already spent several years fighting the fight for equality and inclusion for people with disabilities. I had to take another big step and become an advocate for racial equality. I had to be consistent in my fights for inclusion and equality and extend my thinking to include the Black community and all people of color.

That 10-second response from Bill certainly packed a lot of punch. A punch that I didn’t even see coming.

From there, Bill and I then started talking about race in America and how the fight I am waging for Josh and other people with disabilities is similar to the struggle happening inside the Black community, and the senseless racism still persistent in our country. Bill has a preacher’s heart and he is a very wise man — he also isn’t “preachy” when he talks, and that adds an amazing power to what he says.

As we talked, and re-visited the topic in other conversations, my mind kept turning on these thoughts — I couldn’t be an advocate for Josh without also being an advocate for racial equality and a strong voice against racism. That was definitely a bit of an awakening, and also led to some hard discussions with myself about my ability to un-think some things, and maybe even change some of my behaviors.

I then also asked Bill how I could be an authentic and effective advocate for racial equality. In one of our conversations, I told him how I would be getting an opportunity to mentor, and be mentored by, a small group of students who are leaders in diversity organizations at my alma mater, Oregon State University. “How do I engage with them and also not say the wrong thing, or make an ass of myself?”

Bill said, “you already know and you just said it. Be authentic, be yourself, and show them your heart. You’ll still probably say something dumb along the way, and then they will mentor you, and then you will mentor them, and it will all workout just fine. Just be yourself. Your good self.”

Bill’s words are definitely ones to live by, and also words that I try to put into action through my work for Josh, other people with disabilities, and for people, especially Black people, who find themselves at a disadvantage in our country (or worse, targeted) simply because of the color of their skin.

Josh’s daily life is hard, and also beautiful. The hard parts for me are when I see his life choices limited because he has disabilities, or when I see his feelings get hurt because he is treated differently than “everyone else.” Or when I see a situation that potentially creates vulnerability, and possible danger, for him. Yeah, I don’t like those at all — those are the ones that can get me ready to strike and defend in an instant.

There are other hard truths that Josh has to manage that I, and most of us, don’t.

When people spend time with Josh and get a peek into his world, their hearts and minds open, and it becomes important to them to do what they can to be on his side and to help people with disabilities. When they learn about the health challenges and the open-heart surgeries he has overcome, and then learn about his disabilities, they can’t help but realize that he’s got a special soul that has given him more grit than we have in ourselves. He’s just a guy you want to fight for, a guy you want to be with, and a guy you want to succeed.

That’s the beautiful part of his life and his place in our world, and the part I think about as I ponder what it’s like for Black men and women in America, and what all of us can do to fight racism and provide opportunities for all. Perhaps if us “white folk” (another term I learned from Bill that I like) would spend more time just visiting with Black men and women, and also paid more attention to the awful horrors of racism, we might just find that we have a bit more compassion (maybe even a lot more compassion) for the challenges facing our Black friends. And we might also just find a little more zeal to wipe out racism, truly commit to being anti-racist, and do it now.

I feel very fortunate to be Josh’s dad and I love my son very much. I feel those things because he’s my son, of course, but I also feel them because he has exposed me to his life and his challenges, and he has also made me a better human. He has, in fact, made me more human, more inclusive, more accepting, and more loving of all people, and completely not tolerant of racism.

Josh has been closely following the protests that have overtaken America, and he is a passionate believer in equality and inclusion. Josh’s heart is built around fairness and justice — so much so, that he rarely likes direct choices because he desires fairness for everyone. God gave him a compassionate heart for other people, and a passionate soul and fire for equality.

If you ask me, that’s what makes Josh special — not the special needs that come from his disabilities.

Thank you, Josh, for always teaching me how to be a better dad and person. I love those journeys with you the best.