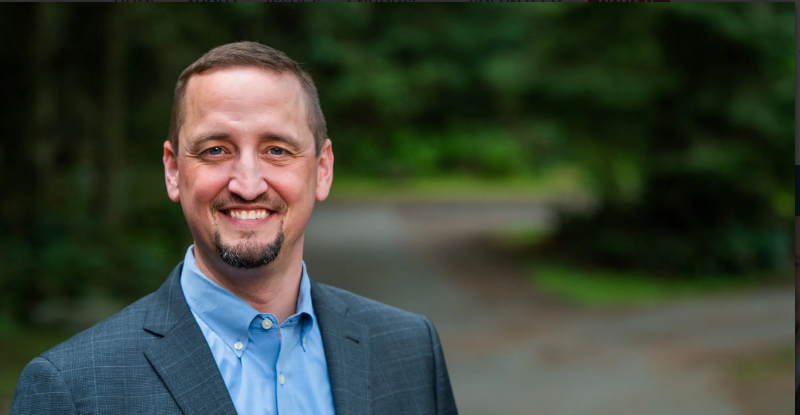 Shift’s Newsmaker Interview is with Representative-elect Greg Gilday from the 10th Legislative District.  Gilday erased an election day vote deficit, winning his seat by 867 votes with all votes counted. Gilday shares his thoughts on his come-from-behind victory, Governor Inslee’s failure to call a special legislative session, Washington Democrat tax policies pushing Boeing to move jobs to other states, and his legislative priorities for the 2021 legislative session.

First of all, congratulations on your victory. What do you think you will remember from this past year’s campaign?

There are a couple of things that stand out.  First, the sheer craziness of campaigning in the age of CORONA.  My campaign had to be quite nimble and prepared to change course on a moment’s notice given the landscape was always changing.  I announced my candidacy last March on the same day legislators were told to stop shaking hands at the Capitol, and I am still waiting for a time I can have a campaign kick-off event!

Second would be the people I have met along the way.  I tried to reach out to as many constituents as possible, personally calling over 5000 and knocking on over 5000 doors – listening to their stories and hearing what issues were important to them.  Getting to know the campaign volunteers who put in countless hours to help ensure my success.

Meeting with other House candidates and building those friendships as we went through similar situations.  Having conversations with my future colleagues in the House Republican Caucus, who were never too busy to provide a word of encouragement, advice and support.

2) Obviously, the top issue across Washington has been the coronavirus pandemic.  What is your assessment of how Governor Inslee has handled this crisis?

At the beginning of the pandemic, when we didn’t know how much we didn’t know, I was supportive of the initial “pause,” which gave us time to assess the situation.

However, since then, I have disagreed with how this has been handled since.  The lockdowns and restrictions have seemed to be politically set and continue to appear arbitrary.  You could go out in a boat, but not fish.  You could continue work as a government contractor, but private contractors couldn’t be trusted to operate safely.  Big box stores could remain open (and crowded), but mom and pop stores were forced to shut down.

The Governor needs to be more open and transparent about the data and science he is using in setting these ongoing restrictions.

Finally, the Governor should have called a special session of the Legislature last summer, and I echo the calls for a targeted special session now.  The emergency powers were not meant to be an ongoing method of governing, and more people should be brought into the decision-making process.

3) Since the 10th Legislative District encompasses Northwest Snohomish County, the Southwest corner of Skagit County, and Whidbey Island, you will have many constituents who will be impacted by Boeing’s decision to move more of their manufacturing jobs away from its Everett facility and to South Carolina. What does the state need to do to keep further Boeing jobs from leaving Washington State?

The loss of so many Boeing jobs, both direct and indirect, is going to have a devastating effect on the local economy.  We need to create a better business climate in Washington to keep jobs here, and some ways to do this would be to reduce onerous regulations, and lower taxes (or at least, not increase them).

The other side has been pushing for increased taxes, be it an income tax, capital gains income tax, low carbon fuel tax, wealth tax, increased unemployment tax – or all of the above.  This is wrong for a couple of reasons: first, with the economy taking a huge hit during the multiple shutdowns and unemployment at record highs, this is certainly not the time to be raising taxes as business are struggling as it is.  Second, instituting an income tax would remove a huge incentive for businesses to stay or locate in our state and invest in people.

4) During your campaign, you spoke about the spread of Seattle’s failed extreme policies (like defunding the police) to the rest of the state. What are your thoughts on this?

When talking with voters over the past 9 months, I would often warn that what happens in Seattle, unfortunately does not stay in Seattle.  It has spent hundreds of millions on homelessness, but the problem has not only persisted, it has grown.  Heroin injection sites, defunding the police, ceding entire city blocks to rioters, “legalizing” most misdemeanors (the latest idea) and similar ideas have turned this once vibrant city into a place many avoid or feel unsafe to walk in.

Unfortunately, supporters always have an excuse for why these policies all fail as they push them out into neighboring cities and counties.  All the while, the City leaders demonize business and the wealthy in their continuous quest to increase taxes.

Since you brought up defunding the police, I’ll just note I am absolutely against this type of policy.  “Defunding” would only lead to longer response times and an increase in crime.  Instead, we should look at properly funding our law enforcement agencies, including equipment and staffing levels.  That being said, we should always be looking at methods to become more effective, efficient and transparent.  Defunding and scrapping the entire system is not the way to go.

5) What issues will be your top priorities during the 2021 legislative session?

The top issue is going to revolve around COVID relief bills necessitated by the Governor’s lock downs.  The Legislature needs to focus on bringing relief to Washingtonians and to small businesses that have been devastated by these lockdowns.  Rep. MacEwen is working on a number of bills that would bring this type of immediate relief, including postponing and suspending the collection of B&O taxes, holding the line on increases to unemployment taxes and delaying liquor license renewals (which can be expensive).  Thousands of businesses have shut down as a result of the lockdowns, and these types of immediate relief could help businesses already hanging on by a thread to weather this newest lockdown.

6) You have attended a couple of virtual organization meetings with members of the Republican caucus.  Do you have a sense yet, as to what committees you will be serving on?

The committees themselves have not been set as of yet, but there are a number of them I’d be interested in serving on, and would be useful to the 10th LD.  These include Capital Budget, Civil Rights and Judiciary, and Education.  I’d also appreciate the opportunity to continue Rep. Norma Smith’s work on privacy issues on the Innovation, Technology and Economic Development Committee.

In the end, whichever committees I end up serving on, I will work to bring commonsense policies and solutions for the people of the 10th LD and of Washington.