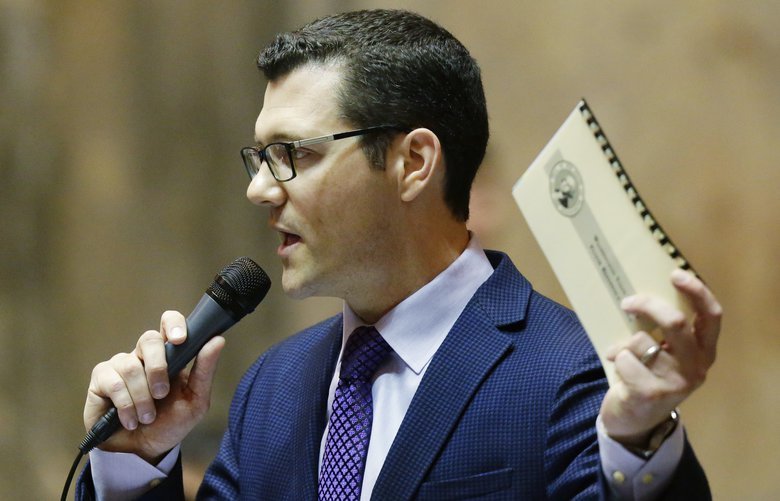 This week’s Newsmaker Interview is with Joe Fain, President and CEO of the Bellevue Chamber of Commerce and former Washington State Senator from the 47th Legislative District.  Fain provides his unique thoughts on Amazon bringing 15,000 jobs to Bellevue, the current political culture, and not giving up on Seattle.

The big local news is that Amazon is bringing 15,000 jobs to Bellevue. What are the opportunities and challenges this brings to the Bellevue business community?

This is great news for the City of Bellevue but growth of this magnitude comes with a hefty to-do list. The city and business community are hard at work planning and implementing transportation investments and exploring innovative uses for smart transportation technologies. While traffic might be the most notable challenge, preparing for Bellevue’s next decade also means growth in affordable and workforce housing, increasing capacity in our schools and daycares, and even the lesser-seen demand for utilities like power and sewer. What is often left out of growth discussion is the focus on the people themselves, not just the services they demand or the space their take up. To thrive, Bellevue needs to activate the individuals that will soon call Bellevue home. We need to connect them to social circles, service clubs, nonprofit boards, volunteer opportunities, networking and recreation options, and bring them into the community in a way that makes feel a connection and commitment to Bellevue’s prosperity.

How has the City of Bellevue reacted to the prospect of having Amazon becoming a large presence in the city? Is the city prepared to handle this influx of new people into its downtown core?

No government is perfect, but wanting to do the right thing is always a good start. Bellevue has a functional city government, a talented and trusted city manager, and a functional political culture where people from different perspectives still talk to one another and come to compromise. There’s no question that Bellevue has already experienced and will experience more of the unpleasant side effects of growth, traffic being one of the most visible; but the pros dramatically outweigh the cons. The community partnerships that exist between long-time Bellevue businesses, new Bellevue companies, city leadership and other civic leaders and organizations are prepared to meet these challenges.

Locally, it seems that the business community is under constant attack from those who desire bigger and more powerful government entities. What are the effective messages businesses can use to fight back?

Gallop conducts an annual survey on institutional confidence. Since the 1970s there’s been a remarkable decline in the public’s faith in almost every institution in America: Banks; big businesses; the media; politicians; religion; even our public schools. Only a small handful continue to hold a position of trust: Police, the military, and small business.

We’re blessed to have large and successful global corporations call our region home. Their success has unquestionably fueled our economic prosperity. But even as we rely more and more on our smart phones and the increasingly impersonal and commoditized way we engage in commerce, our hearts are still on main street. Small employers, restauranteurs, boutique manufacturers, and the local services we frequent have great credibility as the voice of a community. Nothing is more beneficial to a large corporation facing regulations or taxes than to be surrounded by a chorus of hair stylists, real estate agents, and ice cream shop owners who are sharing the same message.

We must also be more organized and willing to take our message directly to the public. Lobbying a politician that doesn’t understand your values is a little like trying to season ground beef hoping it will turn into a filet. Instead, we should find popular issues that have been stifled by intrenched interests and take them directly to people. To succeed, this strategy will require the business community to convince the people that it is right about an issue. Investing in that kind of education and outreach to voters will pay dividends well-beyond one specific issue and start changing people’s mindset about the economy, the benefit of free markets, and the role of government.

There appears to be a growing divide between Seattle and the Bellevue. Many people on the Eastside are uncomfortable going into Seattle to shop and dine. Is this separation good or bad for Bellevue?

Bad. This might be a surprising answer from the head of the Bellevue Chamber, but an unhealthy Seattle is bad for the Eastside. We’ve got a great culture, economy, and quality of life on the Eastside; but we cannot discount or separate ourselves from the economic power that Seattle represents. While the growing concerns over public safety, political dysfunction, and anti-business sentiment are keeping some hunkered down on the East side of Lake Washington; hundreds of thousands of our region’s residents are making the trek across the lake every day. For many, city boundaries are lines on a map that nobody looks at.

We can’t give up on Seattle, nor should we paint it with a broad brush. There are thousands of Seattle businesses and tens of thousands of residents who work tirelessly to make their city a great place. While we would gladly welcome them to Bellevue and the Eastside, we are equally well-served to have them on the West side fighting for the respect and support that they deserve from their city leaders.

You have now been out of the state legislature for a couple of years. What are your overall impressions of what is currently taking place in Olympia and how it will impact the state’s economic well-being?

I’ll be the first to admit that I’ve sponsored and voted for a few taxes in my day. As our region becomes more complex and the needs become greater there is sometimes a need for government to grow in certain areas for our greater social and economic benefit. The choice to raise taxes, however, should be a last resort and one that is done so sparingly and with both appreciation and respect to those who will be forced to pay.

Sadly, what I see from a growing segment of political leaders in our state is a belief that taxes themselves are the answer. Not merely to solve a specific program with a proven and necessary intervention but because of a belief that new taxes and bigger government alone will make the community better.

Part of this philosophy stems from the tried and true political tactic of division. We are inundated with messaging telling us that our problems exist because of someone else. Depending on the political aims of the speaker those perpetrators could be anyone from immigrants, gay people, Christians, gun owners, the homeless, landlords, unions, the rich… the list is endless. This deeply damaging brand of political discourse is highly emotional, devoid of data and facts, disinterested in genuine debate, and is more of a dog whistle to raise one’s standing among a rabid base than a form of persuasion or leadership.

In the end, there is no specific politician, policy, regulation, or tax that will be more damaging to Washington’s economy than a political culture that is no longer interested in data, debate, and compromise.