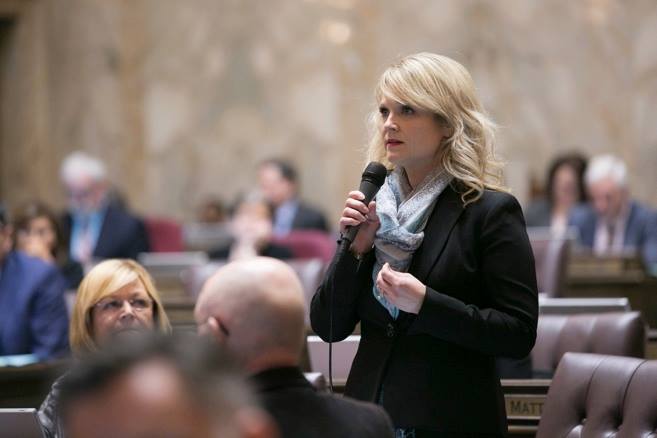 This week’s Newsmaker Interview is with House Republican Floor Leader Jacquelin Maycumber (R – Republic).  The Roanoke Conference’s 2019 Slade Gorton Rising Star Award winner has represented the 7th Legislative District (Northeast corner of the state) since 2017.  Among the topics Maycumber discusses are the economic and environmental damage caused by the state not managing our forests, the failure of the Democrats to condemn the repeated attacks on police officers, the problems with holding a legislative session virtually, and the damage caused by Governor Inslee illegally transporting maggot infested apples into Eastern Washington.

You have a strong working relationship with members of our state’s law enforcement officers.  How do you view what is taking place in Seattle with regular physical attacks on police officers?  Why do you think Democrat officials have failed to condemn the actions of those making the attacks?

It takes courage and strength to stand up against a violent mob.  These are moments that define public servants, to do what is right when it is the most difficult. Fear is driving policy, resulting in unsafe streets, communities and homes. Crime has made a dramatic increase in these mob-controlled cities.  Now with the demands to “defund the police,” we will see more crime, more response time and more lawlessness.  As a former Law Enforcement Officer, I know what it means to put on a uniform and carry the weight of serving and protecting our community. Politics has placed hate and violence on the backs of public servants not politicians. As these attacks on people, businesses and law enforcement continue without responsibility, our first responders will no longer continue in the profession, while our communities become unsafe.

You recently said it is a “transparency” issue for the legislative session to be in-person.  What led you to make this comment?

The current 900+ page budget that including 18% increase in spending, was provided to us shortly before the debate. These majority tactics result in you paying higher taxes than you have ever in state history. Now with an economic crisis, we need open and frank conversations regarding protecting our small businesses and economy, not negotiated policies behind the scenes and brought forward for a zoom vote.  Not all legislative officials have quality broadband and would not be able to properly represent their constituents.  We can protect the most venerable and hold safe Legislative Action.

The Governor and Democrat legislative leaders appear to have avoided having a special session before the November elections.  Will this be a good or bad for Washington?  Why?

We elect legislative officials for moments like this, to diminish damage and protect the most vulnerable in a state of emergency and economic recession. There is no reason the Governor should ignore the economic crisis, while businesses, manufactures such as Boeing close, as we push even greater economic distress to another fiscal year.  Two things occur, we push the greater burden onto the people and already struggling businesses and we cut services to those need it the most. These issues need to be addressed by the voices of the people, the Washington State Legislature. Not the Governor’s magic 8 ball, putting politics above people.

How would you grade Governor Inslee’s performance during the coronavirus crisis?  What would you do differently?

I have had little to no contact from the Governor’s office. As we have moved from a health crisis to an economic recession and now an educational void, he should have been in discussions with legislators.  The Governor has taken on the burden of every decision and lack of communication, thus, been solely responsible for the COVID economic depression.

What does the state need to do to prevent the wildfires that once again impacted our state this summer?

Our state needs to prioritize healthy forest management, now. Those of us in Eastern Washington are suffering, losing our forests, our homes and range lands.  If we provide forest management through preventative means, we spend less in the following year firefighting. In addition, we create jobs and locally sourced product for Cross Laminated Timber building. Climate outsourcing has become common in Washington state politics. Understanding forest fires are the highest contributors to carbon in the atmosphere, we can quickly and immediately address healthy forest and a healthy environment.

What are your thoughts about Governor Inslee breaking the law and bringing home grown apples (which happen to be infested with maggot larvae) into Eastern Washington?

As someone who has been born and raised in Washington state, I am concerned for our local apple growers.  Our orchards have been under enormous stress to bring in the harvest, safely and with healthy employees during this time of COVID, now fires.  This was an unnecessary burden by our highest elected official.   Our communities have carried this burden to search the diseased apples down and worry about infection.  Agriculture is the second largest industry in Washington State, and we are one of the biggest apple producers in the world.  This is a time to protect and celebrate this industry that so many people in the state rely on.