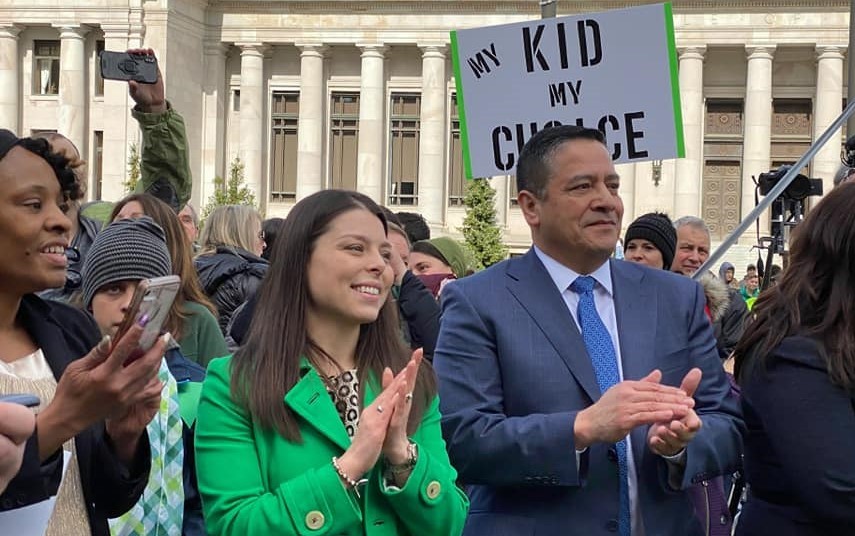 Those of us at Shift cannot recall another instance in Washington State’s history when a legitimate candidate for statewide office gave birth during the general election campaign.  Superintendent of Public Instruction candidate Maia Espinoza and her husband welcomed a new girl into their family last Tuesday.  In her interview with Shift, Espinoza shares how the new baby makes her even more committed to improve Washington State’s schools.

Espinoza also shares her thoughts on the “very poor leadership” of the SPI’s office to assist local school districts as they prepared for a new school year of distance learning and transitioning back to in-person instruction.  Espinoza strikes back at the controversial incumbent SPI (“It’s sad that the public schools in Washington are being run by a bully.”) who has resorted to personal attacks after his poor showing in the primary election.

1) You just recently had your third child; can you tell us a little more about that?

My husband and I just welcomed a baby girl to our family this week. The addition has renewed my belief that this issue just can’t wait any longer. We have to make meaningful change in our education system now.

Our family couldn’t be happier and are ready to keep working to ensure all kids in our state are receiving the education they deserve!

2) Besides welcoming a new baby girl, how is the campaign going? This has certainly become a strange year to be running for office. What has been the biggest hurdle your campaign has had to overcome?

This has certainly been a strange year but I think we have an amazing opportunity here to rethink the way we go about education here in Washington. For years, I have been pushing for increased connectivity for students along with more tools and resources for working families and single parents. This has been the focus of our campaign from the start. To me, school closures just exposed issues that have been ignored for so long.

With so much uncertainty and financial hardship across Washington, fundraising has of course been a challenge. Even so, we were able to outraise the incumbent with over 95% of our donations coming from individual donors. I think that’s a testament to how important this race is this year and how ready we are for leadership and family representation in the Superintendent’s office.

3) In viewing the Public Disclosure Commission reports on this campaign, it appears your fundraising has kept pace with the incumbent, who has received large contributions from state employee unions and liberal special interest groups, while you have received most of your donations from individuals. What do you think this says about how each of you will run the Superintendent’s office?

It’s simple, Reykdal will work for special interests and I will work for parents and students. Over the last four years, it’s clear that Reykdal has put his own partisan, political agenda ahead of the best interests of our kids. We can see this by the opportunity gap that has continued to widen, test scores that have stagnated and the overall dissatisfaction with our school system across the state. We have been able to outraise the incumbent, with over 95% individual donations because it’s clear, people are ready for a change, ready to reimagine education in Washington state.

4) Schools around the state are slowly bringing students back to in-person instruction. How would you assess the leadership of the Superintendent in this process? What would you do differently?

I think we’ve seen very poor leadership from the current Superintendent. We’ve had 6 months to address school openings, consult with health professionals, get kids connectivity in their home if need be, however OSPI is continuing to scramble to get laptops distributed, school districts are getting mixed messages about reopening, and worst of all, families are caught in the middle!

Instead of working with these stakeholders to facilitate an equitable way to reopen safely, the Superintendent’s office put out a 50+ page document from Olympia showing the numerous barriers to reopening. This lack of leadership and direction left school districts to fend for themselves on a reopening strategy, and our students are suffering because of it.

Families that can afford it are sending their children to learning centers and private schools (enrollment on the rise), many have made a difficult decision to homeschool (usually mom taking this on), and others are still left in limbo with no good options (income and child care restricted). As Superintendent, I will be working closely with health officials, school boards and parents to safely and sensibly reopen schools as quickly as possible.

5) Since his disappointing performance in the August primary, The Washington State Democrat Party has been very active in promoting your opponent in this non-partisan race. They have repeatedly attacked you personally. How have you handled these attacks?

We were expecting as much from someone as partisan and revenge driven as Superintendent Reykdal. It’s sad that the public schools in Washington is being run by a bully, it’s actually very concerning as a mother. I maintain this is a nonpartisan race, as it should be. If he wants to continue spinning up nonsense and attack me on a personal level, that’s his prerogative, but I think he really is doing a disservice to the kids and parents of Washington by turning this race into another partisan dog fight.

6) The other state education topic on the ballot is Referendum 90 to repeal Superintendent Reykdal’s controversial sex education legislation. From your conversation with people from across the state, what are people saying about the bill?

A vast majority of the people I’ve talked to, think this bill and its corresponding curriculum is reprehensible. While Superintendent Reykdal calls them flat-earthers and Holocaust deniers, these are parents across the state from every walk of life saying they are unhappy with this legislation. Reykdal’s own survey showed a majority of people did not want this, yet, he continued to push this bill instead of focusing on the numerous issues our students are facing. It really does take a special talent to take something everyone was on board with, something like basic sex-ed and turn it into the controversial hot button topic we see today. Way to go, Chris.

7) If elected, what is one thing you will propose to the legislature to improve education in Washington State?

As I did early on in my campaign, I’ll continue to call on the legislature to allocate a per-student stipend and propose other avenues to affirm school choice for families. Equitable education funding and transparency will be one of my first orders of business if elected to fill this role. Disproportionate funding across the state overseen by the current Superintendent has led to a continued overreliance on local taxes putting property rich districts at an unfair advantage over low-income and rural communities.

The current Superintendent has widened educational disparities through the inefficient use of education funding, and by creating obstacles for districts to receive funding they are entitled to. Behind California and Texas, Washington is home to the largest number of migrant students in the country. Yet, schools that should be receiving these funds aren’t. Through my nonprofit work, I’ve personally proposed and participated in potential solutions to problems like these, but Reykdal and his office, after marking our participation, have simply shown us the door. His special interest, political donors control the conversation. Diversity, equity, and inclusion to Superintendent Chris Reykdal is just a slogan.

This is just one of the countless examples of where Superintendent Reykdal clearly either doesn’t understand or ignores the challenges families face, a classic example of checking a diversity box to demonstrate “inclusion” regardless of equity outcomes. We can do more for our students than ​talking a​ bout equity, but we need someone in the Superintendent’s office who is willing to work on behalf of parents and families rather than special interests. Meaningful inclusion is how we will achieve equity for our students–equal access to education for all of Washington’s students.

For more information about Maia and her campaign, visit: www.maiaforus.com