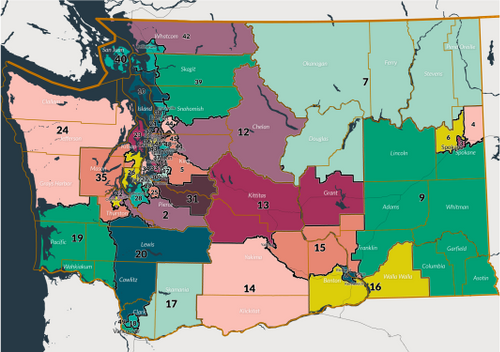 In what must be a dream come true for Democrats, the Washington Redistricting Commission, tasked once a decade with redrawing the congressional and legislative district lines after the federal census, failed to deliver the maps on time. Seemingly, three of the four commissioners took their duty honestly, and worked hard to reach a bi-partisan, fair compromise. Unfortunately, Senate Democrats had little interest in negotiations, and thus their appointee – environmental activist and failed congressional candidate Brady Walkinshaw – slow walked the process, failed to review the maps on time, took a vacation the week before the deadline, and basically completely abdicated his job responsibilities.

Walkinshaw’s dereliction of duty guaranteed the Democrat-controlled Washington Supreme Court will now decide the new congressional and legislative districts. But the Senate Democrats knew that quilting on the job would be easy for Walkinshaw, given his legislative record.

It’s almost as if Walkinshaw wanted the Supreme Court to draw the maps.

The redistricting commission’s nonpartisan and nonvoting chair, Sarah Augustine, said in an interview last week she found Walkinshaw “not as engaged” in the process, based on her interactions, especially as the deadline neared.

Walkinshaw, who had travelled to Glasgow for an environmental conference with Democrat Governor Jay Inslee in early November, said that he “did not even see the legislative map before it was sent”.

Despite good-faith efforts by the Republicans on the committee – and Democrat commissioner April Sims — to perform their constitutional duty, the committee ran out of time and missed the deadline to send the maps to the court. Walkinshaw was still asking about legislative district borders, which he admitted he didn’t care enough about to actually look at the final map, 10 minutes before the deadline for the vote to approve the changes.

All these delays were engineered by Democrat legislative “leaders” because they wanted the State Supreme Court to take over drawing the maps. The Democrats saw no reason to negotiate or compromise with Republicans, when they could control the whole process. And of course, within hours, Democrats and their political allies were signaling the court’s good liberals how to decide.

Progressive activist, Matt Barreto, a self-promoting voting rights expert at the University of California (Los Angeles) after an undistinguished tenure at the University of Washington, released a lengthy analysis of the maps the commission had published just 24 hours earlier. It appears, given the depth of Barreto’s analysis, that he had access to the maps before the deadline, unlike the rest of the public, for him to complete his publication by November 17. The analysis mirrors previous attempts by former Democrat Legislator Luis Moscoso to gerrymander political districts to favor one racial group over another because they typically vote Democrat.

Barreto, whose “non-academic” activities have long been funded by liberal dark money groups, claims the maps are illegal because they don’t take into account “communities of interest”, which is Democrat-speak for the maps that don’t favor the Democrats enough. And, of course, Barreto’s solution was exactly the same one he had published before the maps were released, in a Seattle Times op-ed, because for Barreto his paydays depend on promoting race-based election theories that attract liberal donors.

agreed with Barreto’s analysis and hopes that the court will take the Democrats’ desire to create even more left-leaning districts into account.

The Democrats have been clamoring to segregate the Yakima area for years to create an Eastern Washington district that Democrats can count on to advance control still further in their favor in Olympia. The Democrats hope to achieve this with the move to punt the redistricting process to the Supreme Court, while continuing to shout “it’s not fair” at the top of their lungs.

When Democrats can’t win on ideas, they like to change the rules to their favor.

Hugh Spitzer, the Democrat “godfather” of creating an illegal state income tax, predicts the court will lean towards the Democrats and create maps that will create stronger Democrat-controlled districts.

Republicans are instead urging the court to adopt the final (while late) maps, which the commission squeezed past

Walkinshaw 24 hours after the deadline. At least those maps were somewhat non-partisan and were created with public input while attempting to honor the intent of the law.

The congressional and legislative redistricting process is supposed to create fair, but competitive districts that represent the people living in them. Commissioner, and former state representative, Paul Graves said as much when he described the maps the commission were working on: “it’s competitive, fair, follows the constitutional requirements, and focuses on keeping communities of interest together.”

Unfortunately, at least one of the Democrats on the commission was not working toward the same goal.

Now the state’s political boundaries for the next decade are in the hands of the unfortunately partisan State Supreme Court justices, the majority of whom owe their seat on the court to appointment by Democrat governors.

And, now we’ll find out just how much these justices owe to those who appointed them, by either deferring to the work of the redistricting commission or in drawing lines to better benefit the Democrats.