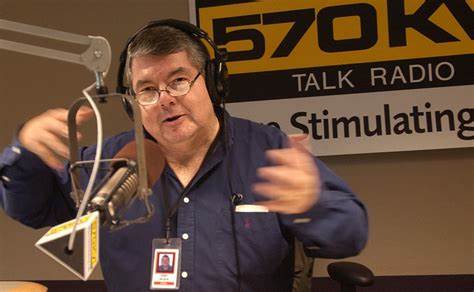 Shift’s Newsmaker Interview is with one of our favorite people in the media, Kirby Wilbur from KVI AM 570 (Weekdays 3:00PM – 6:00PM). Kirby has been a rational and steady voice for the conservative perspective for nearly 30 years.  Kirby shares with us the highlights of his career (including interviewing Richard Simmons in-person in the studio) and the local conservative movement (gaining international coverage with rally against “Hillarycare”).  He also shares his thoughts about what conservatives need to do to get elected in Washington State, the local liberal media, and the future of talk radio and the conservative movement.

Tell us how you became involved with talk radio and what have been the highlights of your career thus far?

In the late ‘80s and early 90’s, I was a real estate appraiser, in my car every day, so I listened to a lot of talk radio. I called and became a regular caller, and even got through to Rush one day in August, 1991. I was also Platform Chairman for the state GOP in 1992 (a rough year, if you all remember), so I was a frequent guest on some of the shows. Mike Siegel, on KVI, asked me if I’d sit in for him one week while he was on vacation. I got a positive response from the listeners, I became the bench for the station, the sub for folks on vacation and it led to an offer to host the 9-midnight show, for $50 a week.

The high lights of my time there, well, the morning of 9-11, I was on-air. The day after, we raised $235,000 for the Red Cross for their relief efforts. The Hillary rally in July, 1994, when we protested Hillarycare, we got international coverage on that one. Election night, 1994, when we took back Congress. And the day I interviewed Richard Simmons, live in studio.

You took a short break from talk radio to work in Washington, D.C. for the Young America’s Foundation. Tell us about that experience.

I had served on the Board of Directors of Young America’s Foundation for many years when Ron Robinson asked me in early 2013 if I would come back and head Their National Journalism Center. The NJC is a program consisting of internships and classes for young conservative journalism students. We placed them in internships at Fox News, the Washington Examiner, WMAL, the local talk station, the Daily Caller and other media outlets, not all of them political. Graduates of the program include Ann Coulter, Bill McGurn of the Wall Street Journal, John Fund, Malcolm Gladwell and Greg Gutfeld. In my two years there, we had 126 young journalists come through our program. It’s twelve weeks long, four days a week at their media placement, Fridays in class. We had classes on issues, video editing, interviewing and had alumni come back and offer career advice. I had one basic rule for them. The three steps for successful journalism are always tell the truth, always verify sources and tell a good story.

We had really good quality kids come through and I remain in contact with many of them. I firmly believe that the answer to media bias is to produce good journalists, not regulate or complain.

What do you think conservative talk radio’s contribution has been to our nation’s politics?

The contribution of talk radio has been mostly positive. It brought the conservative message to the general public, gave them a source for news, information and viewpoints that outflanked traditional media and trained a generation of messengers. But there is some talk radio that is extreme and reflects poorly in the medium. It’s rare, like Alex Jones, but the Left points to it as typical, which it is not.

You started in the conservative movement in the 1970’s – what are the movement’s greatest successes, and what top objective remains to be done?

Since I got first involved, the conservative movement has helped frame our national debate. Electing and re-electing Ronald Reagan let us to economic growth, victory in the Cold War and a restoration of national pride. Getting Bill Clinton to say ‘The era of big government is over” in 1994 was big. But we didn’t keep up with the times and the Left gained ground after the mid-2000s. Politics moves in cycles and the conservative movement became too big, too self-confident and too complacent. We now need to restore our movement around fundamental conservative principles and find the language and the methods needed to start gaining ground and diminish the Left.

Can a conservative succeed statewide in Washington State?  If so, what do they need to do which recent Republicans have not done?

I believe a center-right candidate can succeed in Washington state. Rob McKenna came so close and others can and will. We need more unity (conservatives and Republicans are notoriously divided and obstinate here in Washington), more focus on the county courthouse and local government (to grow the farm team) and improve our methods of communication and messaging. Developing county and local leadership like Bruce Dammeier and Nadine Woodward, mayor of Spokane, is key, as well as recruiting younger and more diverse candidates like Nate Nehring on the Snohomish County Council.

Why is the local media so easy on liberal elected officials (like Jay Inslee and Bob Ferguson) in Washington State?

The media is so easy on local liberal politicians because they are in sympathy politically and they are ignorant of Republicans. How hard do we try to get to know the media people? When I ran for King County Council, I met with the three area reporters so they could get to know me. I think I got fair coverage. Some media people are lost causes, but not all. We need to engage them, not simply write them off as liberal fools. And we need to support organizations like the National Journalism Center, do what we can to create more conservative and center-right journalists, or at least some fair and open-minded ones. If we send our conservative college kids to engineering and business schools, we can’t complain too loudly about media bias.

What is in the future for Talk Radio?

The future of conservative talk radio, that’s a good question. People’s listening habits are changing, as their work habits and their listening platforms change. There will always be, I believe, a demand for good, responsible conservative talk. We have to remain relevant, informative and entertaining and adjust to changes in technology and listening habits. But there will always be a need for our voice to be heard and people who want, and need, to hear it.

Thank you for the honor of being your Newsmaker. I read you every day and my show wouldn’t be the same, or as good, without you all. You fill a very important need and I wish you a long and productive life.