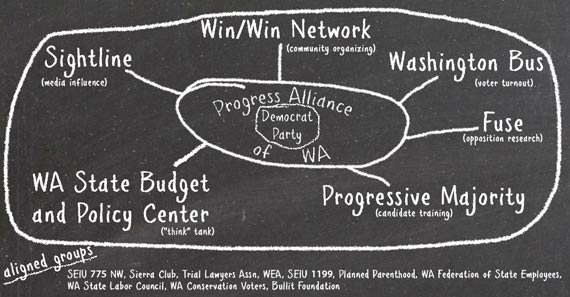 Hypocrisy – it’s a staple of the liberal politics that the likes of Jim McDermott have defined for Seattle for a generation. From the so-called “progressives” waging a real War on Jobs agenda with their big-tax, big-government regulatory policies, to the attack-dog tactics of the many “non-partisan” groups that support only Democrat campaign (or, occasionally, Socialists for City Council).

Hypocrisy – that’s the theme of an investigative report this morning by Austin Jenkins. If you haven’t heard about it yet, take time now to listen or read his story from KPLU.

It’s sad to say, but this is, finally, the first story by the mainstream media on this Democrat attack network that started in 2005. It began with a few tech billionaire types, with the stated intent of moving Washington State’s politics even further Left.  After studying what had happened in Colorado the year before (documented in the book, The Blueprint), they decided that they could get around our state’s financial disclosure laws by operating outside party and candidate control – and in secret.

They easily found Democrat political operatives – from union reps, to social justice activists, to radical enviros – willing to take their money to go along. Because after all, these are the people raised on answering Saul Alinsky’s question, “Does this particular end justify this particular means?”  One need only look back at one of the biggest fines in PDC history, on the Democrat consulting group Moxie Media, to know how sleazy they can be in answering that question.

Blowing the cover off of this shady scheme is exactly the type of work that motivates SHIFT every day – to shine a spotlight on the excesses of the professional Left in this state. We know that public policy will SHIFT in Washington when the public knows the truth behind the liberal agenda – higher taxes, to grow a bigger state government, which exerts more control over our lives, and which rewards the special interest friends that fund their campaigns (and sometimes rewards those who leave public office).

Check back on SHIFT in the coming days and weeks, as we build on this latest disclosure to highlight the secret network of liberal activists funded by the mega-rich (members of the so-called “1%” that these activists hypocritically attack when they aren’t getting the money).

Who knows, maybe even the state’s Public Disclosure Commission will take an interest in how these Democrat activists have built a network that thumbs its collective nose at the public disclosure laws of this state.

Like this story? Support us by becoming a member today!