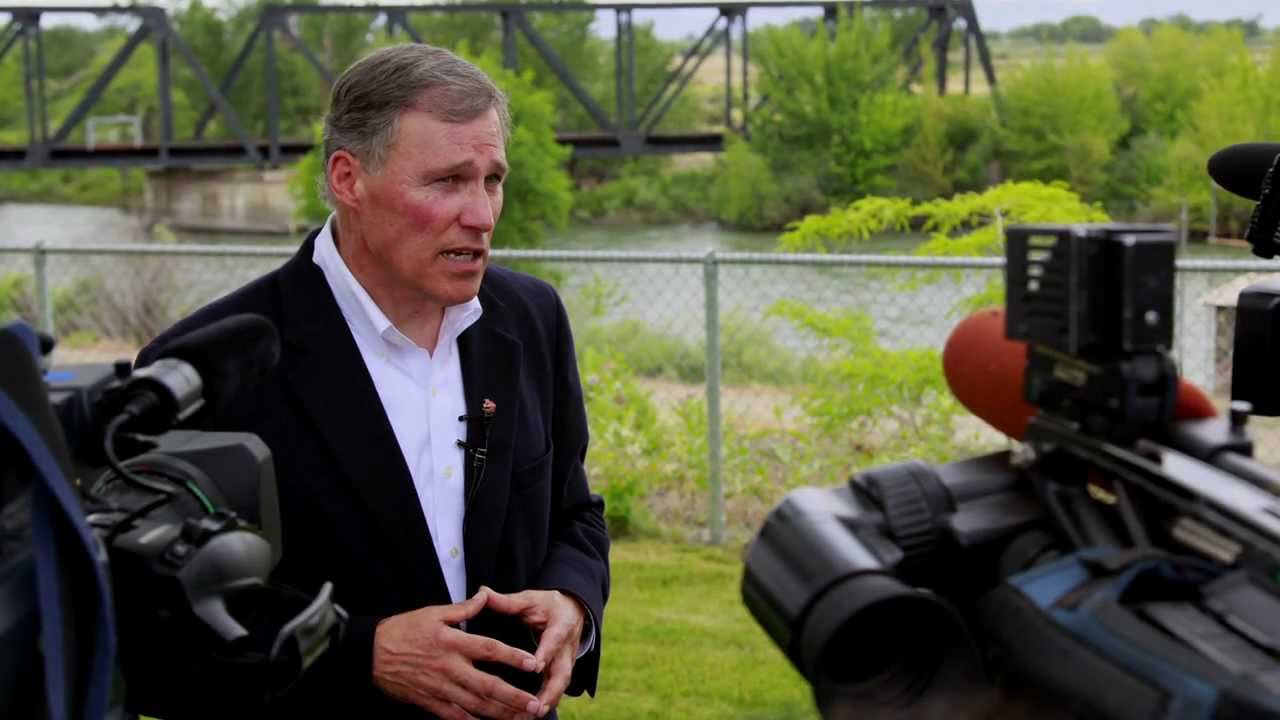 Jay Inslee finally outlined additional details to his climate agenda legislative dream list Wednesday, and it does not improve the picture for Washington taxpayers. His plan centers on a cap-and-tax policy and a fuel mandate, making his extreme environmentalist supporters to burst with enthusiasm. The Seattle Times,

“Alan Durning, executive director of the Sightline Institute, a liberal Seattle policy nonprofit, said Inslee’s plan would be ‘the most comprehensive and probably the most progressive carbon-pollution regulation system anywhere in the world’.”

Of course, by progressive, Durning (and Inslee) mean expensive – for taxpayers.

Under Inslee’s plan, carbon-emitting businesses and fuel distributers who do not met our green governor’s emissions threshold must purchase a permit for every metric ton of greenhouse gas emitted per year. The permits would be sold at auction, with the Department of Ecology deciding who needs to buy a permit – meaning that Inslee campaign donors are probably off the hook.

Inslee is proud of proposing the largest tax increase of his time (so far) in the governor’s mansion, claiming that the program would “generate $947 million in fiscal year 2017.” Those funds would be used to pay for his transportation package, education and tax-rebates for low-income families. Inslee’s program would start July 1, 2016, if the legislature approves it.

Inslee signaled he would take steps to implement the second part of his extreme agenda, a fuel mandate, with or without legislative approval when he announced that he has instructed the Department of Ecology to draft a supporting “rule.” Inslee promised to open his fuel mandate to the “review and comments” of legislators and the public. However, given the fact that Inslee labeled GOP Sen. Curtis King a “fear-monger” for daring to question his fuel mandate claims, we aren’t holding our breathe that our green governor will take heed of any criticism.

Today, Inslee claimed his fuel mandate would cost 2 cents per gallon of gas and would not have a “significant” effect on jobs. How Inslee can continue to ignore experts and studies that clearly prove otherwise remains a point of contention. Rep. Shelly Short, ranking Republican on the House Environment Committee, responded to Inslee’s fuel mandate plan by pointing out that his cost projection “relied on sketchy science, limited studies, broad assumptions and would drastically impact low and middle income families in Washington state.”

According to the Seattle Times, Inslee chose to announce his plan to a “roomful of cheering environmentalists, Democratic lawmakers, and health-care and labor leaders.” Republican leaders, and even a couple of Democrat legislators, did not meet his plan with similar fanfare.

GOP State Sen. Doug Ericksen, chair of the Senate Energy, Environment and Telecommunications Committee, called Inslee’s cap-and-tax plan “an energy tax, which is really a tax on mobility — which is a tax on freedom.”

Democrat State Rep. Ross Hunter, chair of the House Appropriations Committee, responded to Inslee’s announcement with caution. He told the Seattle Times that he “likes the idea,” but that he will wait to see Inslee’s full budget proposal—set to release tomorrow.

In any case, Inslee does not appear to care for the opinion of legislators on the subject. Predicting that Republicans will be “forced to come around to supporting” his extreme green agenda, Inslee told supporters to “write this down, because it’s going to come to pass.”

Inslee gives both his cap-and-tax and fuel mandate plans the benefit of very generous cost estimates. Yesterday, Inslee claimed his cap-and-tax would result in a 12 cent per gallon of gas tax—though our green governor chooses to refer to it as a “fee.” The Washington Policy points out that Inslee’s estimate “implies a cost per ton of CO2 of $12”—a very low projection that, if correct, would ironically negate the need for a fuel mandate. Additionally, as Shift reported, Inslee ignores volatile nature of cap-and-tax systems that causes costs to fluctuate.

Whatever Inslee’s cost projections rely on, it certainly isn’t the $1 plus per gallon of gas cost projections released by his consultants earlier this year. Until we find out how Inslee arrived at his claims, we’ll take heed of the Oregonian’s warning not to trust Democrat governors who claim a fuel mandate offers economic benefits—something Inslee did today.