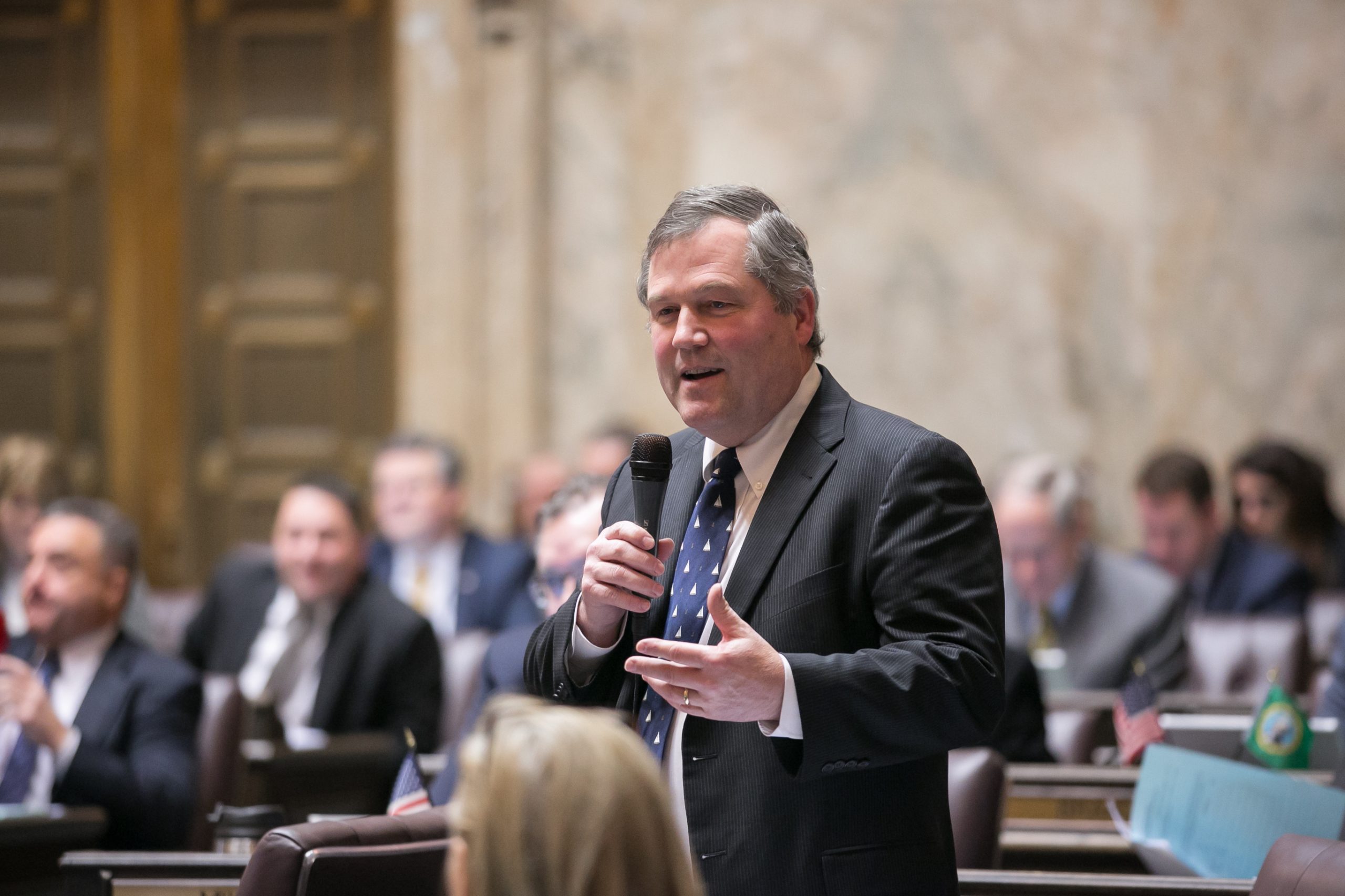 J.T. Wilcox (R-Yelm) is a five-term representative from the 2nd Legislative District which encompasses rural Pierce and Thurston counties.  Wilcox currently serves as the Republican House Leader and sits on the Rules Committee.

We are grateful for Representative Wilcox’ time during the holiday season as we pose a few questions regarding the upcoming legislative session and the 2020 elections.

What are your goals for the Republican House Caucus during the 2020 legislative session?

A party in the minority, above all, has to be opportunistic and watch for moments to prevent the passage of the majority’s harmful policy and budget bills and to advance our goals when opportunity presents itself.  We are committed to mounting the maximum opposition to ever greater acceleration in the size of the state budget and maximum opposition to even more additional taxation on workers and the economy that are demanded to support growth in the budget.

We are against additional regulatory handcuffs on the people of Washington, especially those of very doubtful constitutionality such as the attacks on the 2nd Amendment and the even more explicit protections contained in the Washington constitution regarding the rights of the individual to bear arms in protection of themself.

Article I, Section 24 of the Washington State Constitution states: “[t]he right of the individual citizen to bear arms in defense of himself, or the state, shall not be impaired, but nothing in this section shall be construed as authorizing individuals or corporations to organize, maintain or employ an armed body of men.”

Our goals regarding new legislation are concentrated around three areas as identified by members during the interim.  The policy areas reflect our values that living in Washington State should be affordable and safe and that government should be transparent and accountable.  Our members have already introduced bills to that effect before session and there are more to come.

What can you do as the head of the minority party to slow down the push by the Democrats for a state income tax?

The most important role for all of our caucus is to rally the public in opposition to new taxes that come on top of the immense number and magnitude of new taxes that were passed by the majority last year.  We, and the public need to make it plain that there are significant political risks to members of the majority if they pursue more taxes.  The public can do that by calls and emails, but far more importantly, by attending hearings and insisting on testifying in hearings to demonstrate their commitment.

House Republicans will be a large bloc voting NO and that means that to pass taxes nearly all democrats must be yes.  In cases where that will be a clear vote against their district, the voice of everyday people in that district must be heard.  If there are committee and floor votes on a bill then House Republicans will be there with amendments to divide supporters and to point out the flaws and absurdities that are an inherent part of passing new taxes on top of record revenues and the avalanche of new taxes passed last year and will be strategic and effective in debate pointing out the public opposition to the bill.

I will continue my speaking and communication efforts around the state and in the business community to be sure that there is no misunderstanding.  The threat to the economy and people who work is a clear and present danger and complacency will result in the worst case scenario.

The biggest factor in an election is the direction that the political tide is flowing in our state and nation.  The next three factors, in order of importance are

All of these are necessary, and a swing district campaign is almost never winnable unless the Republican is competitive with the Democrat in all three of these areas.

Our HROC (House Republican Organizing Committee) team concentrates on recruiting candidates who reflect the values of the community that they will represent.  We try to never forget that the first loyalty of the Representative is to the citizens of their district.  Many say that the parties are like brands.  I disagree.  To me, the parties are like trade associations who advocate for the needs of their members and the candidates are the brands and if the candidate already has a brand in the district through longevity, business or volunteer activities or activism for important district causes then we stand a much better chance of getting that candidate elected.

Many community members who will be great House Republican members are not politically active at first.  Many don’t even know what party fits them.  If we are working on candidate recruitment long term, we will identify these productive members of the community and convince them early that our party and the House Republican Caucus are welcoming and value anyone who contributes to the community and local economy.  When we do that early, most people, especially those who are active in the private economy will identify with our party and will be receptive over time to our suggestion that they run for office.

We can be much more successful if we include local government offices and commissions in our planning.  This helps develop more qualified and electable candidates and can also improve our own communities.

Our real goal is to have a team always ready in every viable district so that when opportunity arises, the WSRP, County Party, Leg. District Committee and HROC can encourage the most electable candidate to take a chance, swim against the Washington tide and win a seat so they can represent their neighbors and the values of their community.

Again, we thank Representative Wilcox for his time and thoughtful responses.  If you would like to reach him regarding legislative matters he can be reached at [email protected]