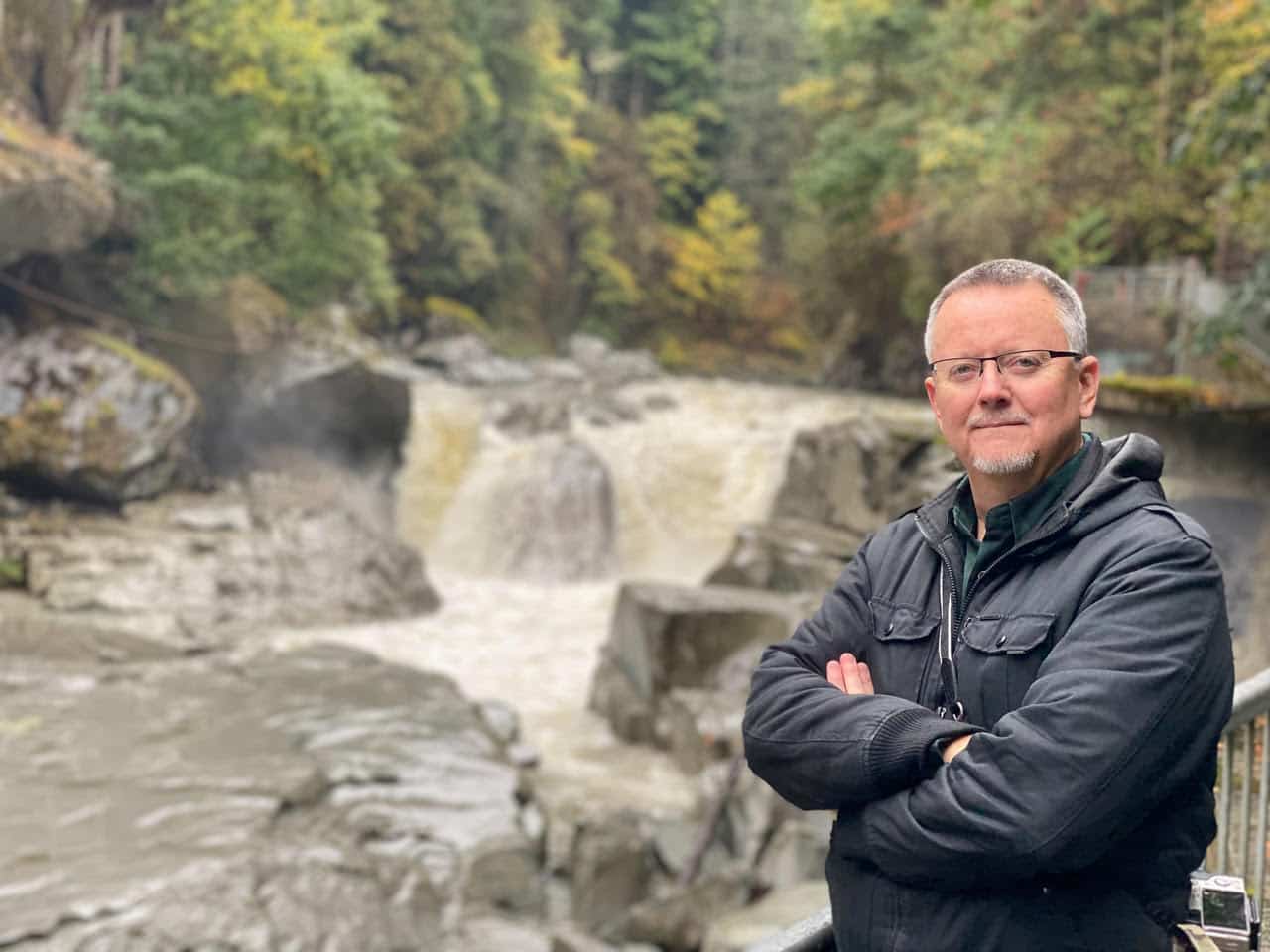 incumbent Representative Mike Sells announced his retirement after his district which went through major realignment during the redistricting process.  The district became more attractive for GOP candidates with the inclusion of moderate and conservative areas outside of Everett.  James and fellow Republican candidate in the Position 1 House seat, Gary Kemp, are attempting to do something many people thought was impossible before redistricting, which is sending two Republican representatives to Olympia from a district which was solidly Democrat.

James is currently a Marysville city councilmember, a small business owner, and a U.S. Army Veteran.  In his interview, James provides his thoughts on the Democrats’ disastrous anti-police laws, the need to provide tax relief to help struggling families, and his belief that the Democrats’ poorly developed Long-Term Care payroll tax needs to be repealed. With thousands of Boeing manufacturing jobs in the district, James also explains what the state needs to do to keep those jobs in Everett.  James also outlines the important reasons why the Republicans have a great opportunity to win in the 38th Legislative District.

First, please tell the Shift readers about yourself, and explain why you are running for a House of Representative position in the 38th Legislative District. Mark & Renae James at the Alamo

As a local business owner and an elected city councilmember, I understand the hard work needed to be successful and how government can help or hinder those it is supposed to serve.

Olympia is out of balance.  The people of WA State want and need balance in lawmaking so that we can have a safe and affordable legacy for those that follow.

When elected, I will use my time, experience, and ability to foster community values, increase government efficiency and maintain transparency for all of Washington State by promoting policies that keep our state safe, clean, and vibrant.  My commitment is to continue diligently working for the people of the 38th and the entire state.

Historically, the 38th District has been a solid seat for the Democrats. Why do you believe a Republican has a good chance to win in 2022?

I believe the timing is great for a Republican to take a seat in the new 38th LD because of several factors. First, with the new re-districting, more of Marysville has been added, which is a typically conservative-leaning community. Second, the top two issues going into this election just happen to be my top two priorities: Cost of living & Public Safety. Third, I have operated a successful business in this district for the past 18 years earning a great reputation. Finally, I recently won re-election to a second term as a city councilmember with 79% and have that name recognition going into the legislative election.

The district has many Boeing workers who have seen thousands of their family wage jobs move to South Carolina and other states.  What can the state do to keep those jobs here? Set the right priorities. We must create a sustainable, predictable and responsible budget.

Everett is a labor community, and the loss of those family-wage jobs hurts the 38th LD more than probably any other. It’s time for the labor movement to give Republicans a chance to lead and bring more family-wage jobs to Washington.

As an example of something that could have helped, in July of 2017 the Legislature passed a bipartisan bill that would have lowered the manufacturing tax rate for Boeing and for other qualified businesses in the state, but the bill was vetoed by Governor Inslee.

We need to become a more business-friendly state by keeping the taxes low and pushing for lower regulations.

What are your feelings about the skyrocketing crime rates which are plaguing Washington State communities? What should the legislature do to help local law enforcement protect our communities?

My wife and I have three sons who are all in law enforcement, so this one takes on a special and deep meaning for me. Two of our sons are WA State Deputy Sheriff’s and one is a Commissioned Federal Park Ranger. Defunding and handcuffing law enforcement was the wrong move. Property crime has risen dramatically in the past two years, crime is rampant and taxpayers are fed up.

Radical new anti-police legislation has emboldened criminals and made it more difficult for the police to safely do their job. Our first responders should be getting more funding for training, not less.  Local law enforcement agencies (like the Snohomish County Sheriff’s Office) are losing officers in huge numbers who are moving to other more police-friendly states. This is a direct consequence of the anti-police sentiment from our one-sided legislature. Republicans are the party of public safety.

The Blake decision by the Washington State Supreme Court in early 2021 removed the possession law and now drug users are boldly displaying and using their drugs in plain view of families and the police.

The legislative fix for this was to have no prosecution of drug crimes until the third warning. This has been extremely destructive because many communities (like ours) were already offering treatment as an option, but when the legislature took away consequences, they also removed the incentive for treatment.

Add to that that the “no-pursuit” law, and now criminals can simply drive away from law enforcement!

It’s unreal. It’s almost like we’re living in the Twilight Zone in regards to public safety.

Local businesses are being hit very hard with historic increases in property theft. And, they are experiencing this record-breaking theft on top of the current economic hardships.

It’s time to fix these predictably bad laws and take the handcuffs off the police and put them back on the criminals where they belong.

Thus far, Governor Inslee and his fellow Democrats in the legislature have refused to consider any type of tax cut to help lower- and middle- income families who are suffering due to inflation and record-breaking fuel costs.  Do you support any tax relief measures?

The people of Washington State are hurting. Inflation is up to record levels.  Consumer prices (rent, groceries, gas) are continuing to rise. So what can we do to help?

Well one thing we can do is stop making the problem worse.  The Legislature could help lighten the load by providing relief at the gas pumps by suspending the gas tax.

They could also cut the sales tax by 1% across the board.  We have a revenue surplus and another $1.5 billion projected to come in that could be used to off-set these tax suspensions and cuts.

The House Republicans proposed a NO NEW TAXES budget that was sustainable, predictable, and responsible. However, the other party refused to listen and instead, raised taxes on some of our neighbors that can least afford it.

In the 2021 session, the one-sided legislature passed the governors inefficient and expensive Cap and Trade bill which will cause fuel prices to go even higher in the coming months. We predict .49 cent increase by Jan 2023 and .80 cents by 2030.

This should be about setting the right priorities, but unfortunately, for the people of WA, our one-sided legislature has chosen to spend rather than give back.

The state has begun to run taxpayer-funded ads to encourage people to support the Democrats’ Long-Term Care plan and payroll tax after the legislature postponed its implementation for 18 months at the beginning of the 2021 legislative session.  What are your thoughts on the state’s WA Cares program and tax? The WA Long Term Care plan, as written, should be repealed.

Nearly 63 percent of voters said last year during an advisory vote agreed and said that it should be repealed.

I think that there are great benefits to be had from a long-term care program, but if a long-term program were to be implemented it should be as an opt-in option only.

Finally, what is your favorite book? Why?

I am continually amazed at the validity and the accuracy of this old book.  The truths written and expounded on within it are timeless truths and it seems that this book was written just a few years ago and applies to our political climate today.  An amazing and timeless gem for sure!

“The exercise of a right is always more pleasurable than the acceptance of a responsibility. And thus arises the truly fatal tendency to claim the right as an individual while passing the inseparable responsibility over to officialdom.”

It’s about personal responsibility, accountability and consequences.  It’s time we get back to the basics.

For more information on Mark James and on his campaign, please visit his website.