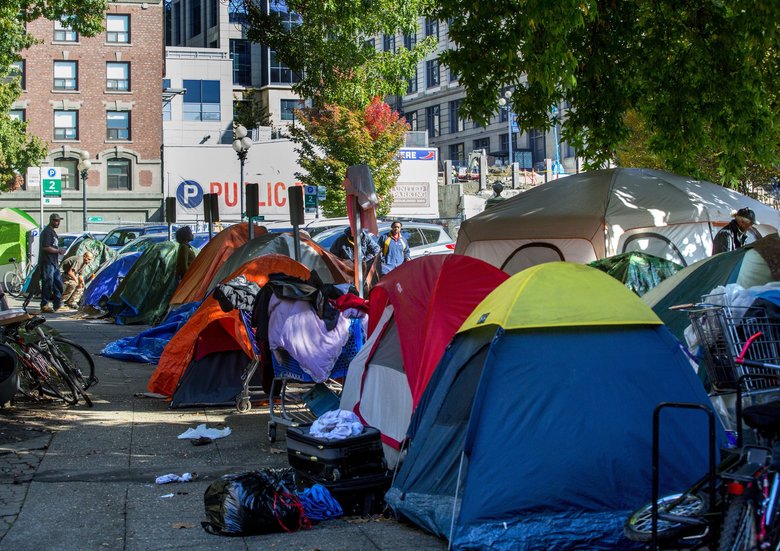 Seattle Mayor Democrat Jenny Durkan has been trying for years to solve the Seattle homelessness problem which she and her far-Left City Council, and the left-leaning Seattle City Mayors and City Councils before them have created. Unfortunately for the taxpayers of Seattle, they are going end up footing the bill for the latest, Durkan-inspired, $5.4 million dollar cleanup effort.

Keep in mind that this is in addition to the $151 million dollars budgeted to be spent on homelessness in Seattle this year. To put this in perspective, Seattle spends 10 times more in a year on homelessness than a typical small city does on its entire budget. This is a problem that the radical Democrat policies have created and encouraged.

Seattle’s response to the homelessness problem is classic Democrat mantra – got a problem, increase taxes first, then figure out what to spend it on later.

Seattle has de-funded its police, reduced regulations on homeless camps, and looked the other way for non-trivial (to them) crimes committed in the city. The Left thinks less police officers and a kinder, gentler law enforcement approach will reduce crime.

Remember the CHAZ zone created during the ‘Summer of Love’ that the mayor and council enthusiastically supported. How’s that working out, Seattle? The city even hired a common street criminal for $150,000 taxpayer dollars, to be the liaison between the city and the helpful, sometimes non-violent protestors, otherwise known as rioters.

When things go wrong, as they inevitably do with most leftist policies, the taxpayers end up cleaning up the mess. The radical leftist minority drowns out the voices of the majority of Seattle voters who just want safe and clean neighborhoods.

In the same city budget where the $5.4 needle and trash cleanup is funded, the budget reduced services to help the homeless find permanent housing. Rather than find a long term solution, Seattle opted to rent a hotel for the homeless. Understandably, most hotel owners are opposed, as the obvious result is increased crime and property damage.

To attract new homeless folks from other states, the Seattle City Council have been supporting free city services and ignoring crimes committed by the homeless on city streets. If you are homeless, want free stuff and want to do what you want, ‘Freeattle’ is the new mecca.

Finally, businesses are waking up and are leaving town, which ultimately will put a huge hole in the Seattle City budget and force the issue to the forefront where it needs leadership to solve it.

Unfortunately, Durkan is not a leader, doesn’t seemingly know what to do next, and doesn’t want to acknowledge the problems she has created. She even disputes the accuracy of the KOMO news documentary, ‘Seattle is Dying’, which clearly showed there is problem.

Our readers at Shift know how to fix this. How about enforcing the idea that people who commit crimes should go to jail and stay there until they have served their debt to society.

The Seattle Police Department agrees, which is one of the reasons the Seattle City Council has started to defund them.

Homeless is going to be one of the defining issues in the 2021 election season. If the Mayor and Council continue down the path they are on, the voters of Seattle will wake up to the ineptitude and vote them out of office.