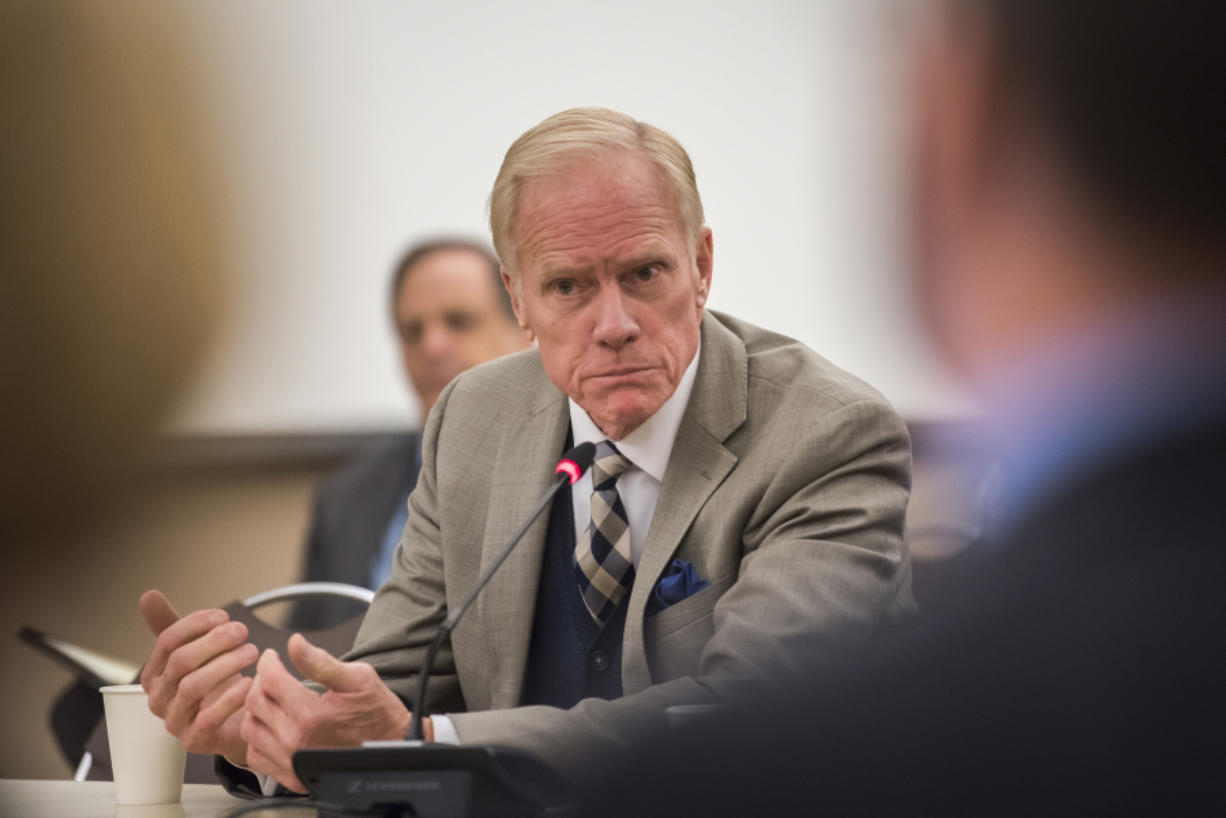 This week’s Newsmaker Interview is with House Republican Caucus Chair Paul Harris of Vancouver.  Representative Harris has served in the legislature since 2011, after previously serving 10 years on the Evergreen School Board in Clark County.  Among Representative Harris’s observations is that Governor Inslee could have resumed in-person education sooner for students across our state if he had included teachers earlier on the COVID vaccination list.  Harris also believes the goal of equitably balancing state taxes is a good goal, yet the Democrats’ proposals do not seek balance, rather they are “just adding more taxes and the government is spending more.”

The 2021 legislative session has been one of the most unique sessions in Washington State history.  How are you adapting to the virtual session?  Going forward, do you see any “virtual” aspects you would like to continue once social distancing guidelines are removed? What has been the biggest negative aspect of the virtual session?

This virtual session has had some challenges, but I believe it is settling in and operating now pretty well. I do believe we need to be in-person to be truly affective. What we have learned is that remote testimony can be done and effectively done in all parts of the state. This will give many people the opportunity to weigh in on issues and hear from a great many of our constituents. This is exciting and very helpful. It should continue so we can be assessable to constituents without asking them to drive to Olympia and take a day off of work.

The biggest negative is the lack of ability to work legislation and too much control of committees and floor action of time and comments.

You are a former school board member.  What have been your views about the slow process many school districts have been forced to take in returning to in-person education?  Is there anything Governor Inslee could have done sooner to return students back to the classroom?

I believe local control should be more the norm especially regarding COVID-19 and how it is handled.  The idea that we are one Washington, which is usually true, proves not to be true in this case. We need to let local schools and local communities do what is necessary to meet what is happening in their area regarding the virus. Many areas are not seeing many cases and are treated the same as those with many new cases.  Those with low infection rates should be open and open NOW.  Schools need to be returning to a strong hybrid or regular school.

I believe the governor could have had included teachers earlier for the vaccine, which may have helped some.  They have now been moved up in line to get the vaccine. I believe students were not at a high risk as teachers were or currently are, so it makes it difficult to move forward without teachers, if not impossible.  We are at a point to really move NOW and it needs to be done.

Despite the Biden Administration and Congress providing Washington State $7 billion in their latest bailout bill, and state revenues projected to increase an additional $3.2 billion, Governor Inslee and the Democrats continue to say the state needs more taxes.  What are your thoughts on the income tax on capital gains proposal?

We as a state have plenty of money these next two years. $10.2 billion in additional revenue is more than adequate as many individuals and families in our state are doing with far less and are struggling to survive.

The Democrats, to their credit, are now saying they want to address the Washington State tax structure. They feel it hurts those who are least able to pay and that the rich do not pay their fair share. If we want to address the tax structure of our state, let us do that, but I believe this is not “a one and done” in a simple bill. The people of Washington State have previously voted 10 times that they do not want an income tax, but some legislators feel they have changed their mind.

I want to be clear that our tax structure has yielded far better returns than our neighbors in both Oregon and California.  We need to be thoughtful as we move in any direction.  Oregon has seen revenues plummet. California, which has all taxes and at extremely high rates, have seen decreased revenue during the pandemic. It tells us that a balance in tax policy is critical.  Washington has experienced a 4% growth in revenues during this crisis.  Idaho and Utah which both have income and sales taxes but unlike California have low rates have seen tremendous revenue growth of over 10% in each state during this crisis.  Balance is key in the tax structure.  I do not hear “balance” being talked in the current tax bills,  just adding more taxes and the government is spending more. The capital gains tax is an income tax and I oppose it.

Low Carbon Fuel Standards has passed through the House with a few Democrats joining the Republicans in opposition to the bill.  What are your concerns with the legislation?

My concern is what are we really doing.  We see virtually no reduction in carbon but a huge cost to those that can least afford it.  Cost vs return.  I want clean air, but this does not have an acceptable return for the cost. Show me something that truly makes a difference.

What are your thoughts on HB 1078, Representative Simmons’ bill which will allow convicted felons to vote even before they have completed community service or paid their financial restitution?

I talked to a constituent the other day. She was hit by a driver on drugs and will now have medical problems for the rest of her life.  This individual is now out of jail and this is their second incident with the law and incarceration.  She is getting nothing but pain and suffering for the rest of her life.  She is young and cannot grasp what we are doing. She wants accountability and some restitution, and she is getting nothing. She said, today in our society there seems to be no accountability. It is true and I believe we all need to be held accountable for our actions.  It is not callus or uncaring, but just the opposite of that. We need to balance justice and mercy and this bill does not do that.  It just assumes all of us are the same and we approach restitution and correcting problems the same and that is certainly not true. I do believe we can do something, but this is not the precise fix that needs to be done.

In the Vancouver area, the I-5 Columbia River Bridge has once again received momentum.  What are your views on the project and what is needed for you to support construction of a new bridge?

My position is that we need a new I-5 bridge.  I sit on the bi-state bridge commission and look forward to seeing what the citizens have in mind as we move forward.  We are receiving a lot of input again and hope to be able to come to an agreed upon a project by the majority of people. We need a safe bridge, and we need to address other future bridge crossings over the Columbia River.

This week, we finally saw a few Democrat political leaders condemn the ongoing violence by liberal activists in Portland (something we have yet to see in Seattle).  In your opinion, why have Democrat politicians been so hesitant to condemn violence being conducted in Seattle and Portland?

I believe they have been slow to respond to the violence because it is a difficult issue as they have friends involved in this issue.  It is very complex issue and once again, it takes a balanced approach.  The police reform proposal that is currently before the legislature is using a club and not a scalpel. We can see that by looking at our police bills that go too far and other legislation in general that goes too far in their approach.  Activists are going too far on both sides.  The storming of our nation’s Capital Building and to the destruction of my previous hometown of Portland needs to be controlled.  We cannot just sit back and let lawlessness take place and condone it.  The tent city of Portland is not acceptable or safe to the public health of its citizens.  We must do better as a society.

For more information on Representative Harris, you can visit his legislative website by clicking here.