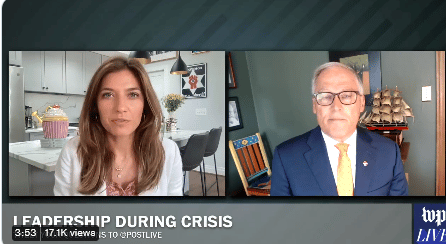 Governor Jay Inslee’s desire to spew reckless and irresponsible demagoguery was on full display earlier this week when he called recent decisions by the U.S. Supreme Court a “reign of terror.”  Appearing on a Washington Post video blog, the governor sought to grab more attention for himself from the nation’s liberal elites by uttering outlandish comments regarding the court’s recent decisions which take power out of the hands of bureaucrats and unelected judges and returns it to the voters and their elected representatives. But unfortunately for the governor, the Washington Post blog was the only place that carried the governor’s attention-seeking comments. The governor responded to a question about the court’s recent decisions by stating, “This is just the beginning of this Supreme Court reign of terror…This effort to prevent the majority will in this country has just started.”

Thus Governor Inslee is recklessly equating the U.S. Supreme Court using long standing judicial beliefs which return power back to the American voters to the horrors experienced by millions during the Holocaust, Stalin’s Great Purge, and Mao’s Great Leap Forward. Thus to the governor, the court making a ruling he does not like is equal to millions of people dying.

It is a fanatic comment one would expect from a drunk overly-enthusiastic college student on social media, not from someone who wishes to portray himself as a statesman.

Remember these comments come from a governor who has eliminated his state’s legislative branch for the last 860 days as he has abused his emergency authority to impose permanent rules on Washington State workers and residents. Imagine the incendiary and outlandish hyperbole Governor Inslee would use if some Republican president had copied his undemocratic actions and eliminated Congress from the decision-making process.

Sadly this is yet another example of the governor proving that he believes there is one set of rules for him and his supporters and another set of rules for the rest of us. (Remember at the height of the pandemic in May 2020 when the governor’s orders were keeping small businesses closed, yet his campaign contributors at the tribal casinos announced they were going to reopen. Instead of threatening to take away the tribal government’s state-granted monopoly on the lucrative sports betting business if they threatened public health by re-opening, the governor chose to say, “I hope that they are very, very successful.”) Also, it is nothing new for Governor Inslee to appear on the national stage and make inflammatory statements as he seeks attention for himself. For example, as his short-lived presidential campaign was begging for attention from the Democrats’ anti-business activists, the governor used his 2019 appearance on the Daily Show to call the Boeing company “blackmailers” and “muggers” simply because they tried to work with the state to keep their high paying union jobs here in Washington.  Then the governor acted shocked in 2020 when the company needed to make drastic cost cutting measures and chose to consolidate production and jobs in other states which valued having Boeing and its employees.  Thousands of jobs left Washington because Governor Inslee believed his campaign for president was more important than working with employers to keep jobs in the state.