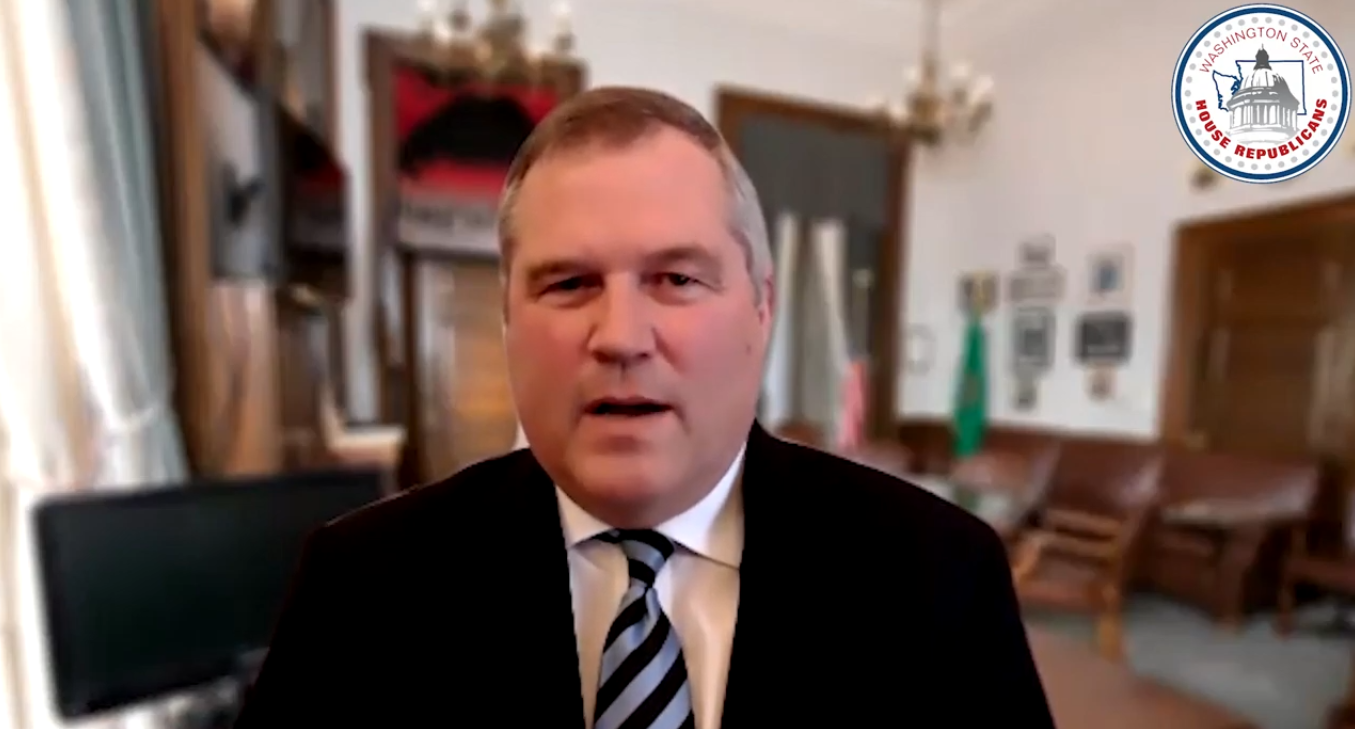 Shift’s Newsmaker Interview this week is with House Republican Leader JT Wilcox.  The well-regarded Representative Wilcox had a front-row seat for the most expensive legislative session in state history (especially for Washington

State rural and low-income households). Thus, the six-term representative from rural Pierce County has many strong opinions on the current “single-party rule” that dominates Washington State politics.  While discussing the many self-serving actions of Democrat lawmakers, including the “the new precedent that the Legislature has no position on a governor-declared State of Emergency,” Wilcox asserted that the 2022 elections will be a “referendum” on the policies and procedures of the Democrats. Wilcox stated he has already begun “fighting the 2022 elections as if everything depends on it.”

Before we get into specifics about legislation, many people are curious about the “virtual” aspect of the 2021 legislative session.  How do you think the technology worked?  Are there aspects you think will continue once things return to normal?  Did you spend much time on campus or did you work mostly from home?

I spent most of almost every day in my office in the Capitol however in the House there were only three members who could do that including Rep. Joel Kretz, Deputy Leader and Rep. Jacquelin Maycumber, Floor Leader.

The technology worked better than expected for most people, however I think the overall impact was bad.  It was the ideal situation for pursuing an ideological agenda and greatly empowered Democratic leaders.  It was easy for citizens to testify but on contentious bills each person got just 60 seconds because the hearing could be overwhelmed by activists.

The press was constrained in their normal investigatory role because they almost never had a chance to catch a member just coming out of a meeting, either euphoric of crestfallen and ready to talk.

I’m sure that zoom is here to stay, but I hope to never again see so little physical collaboration or opposition.  Politics is a profoundly human activity, as it should be and constraining human contact is not a step forward.

Do you think the public was focused on the legislative session and do you think having this be a virtual session (with added security measures that kept the public away) had any impact on legislation?

members is corrosive to our democratic republic and should never be repeated.  The House rules kept our branch even more constrained than the Senate and their safe operation should have been a positive example to the House.

In line with the heavily partisan nature of this session, it seems to me that partisan solidarity got in the way of the responsibility of Democratic Legislative leaders to have proper concern for balancing influence and power between the three branches.  This is new.  In the past Democrats were not reluctant to push back against the Executive or Judicial branch in order to preserve this balance.  We should be willing to do that regardless of who is governor or what party the majority and governor are.  We were all gifted a form of government that works and to neglect balance is a dangerous mistake.  Precedent is important

There were many bad bills that came of this legislative session, let’s first discuss the state income tax on capital gains.  Do you think the Democrats are toned deaf to the fact that all 49 other states, the IRS, and the Congressional Budget Office considers it an income tax, and is thus unconstitutional in Washington State?  Or do you think they have already obtained an agreement from the Supreme Court members to ignore legal precedent when the eventual lawsuit to challenge the tax reaches their courtroom?

I don’t think they are tone-deaf; I think we and they are operating in a very ideologically fraught moment in history and in spite of the fact that the country itself is almost evenly divided, progressive leaders are convinced that this is a time for bold and irreversible moves in their direction.

The antidote is elections and progressives will see the 2022 election as a referendum on their direction.  If there is no significant re-alignment they will conclude that they are correct.

This 2021 legislature passed both a cap-and-trade bill and a Low Carbon Fuel Standard.  These measures are tied to the legislature passing a transportation before the end of the 2022 legislative session.  Do you think there will be a special session in 2021 or do you think this will occur next January?

Most, but not all gas taxes are connected to a bond vote, which requires a super-majority.  I am very doubtful that Republicans will support a bond vote that will activate the crushing burden of all three of these policies in one moment.  We represent many families who live in less urban areas because they can afford housing here, but commute to more urban jobs.

It is unconscionable to me that after a full session of incessant complaining about our regressive tax system and lectures about economic fairness, the Democratic majority would land such a crushing economic blow on these families.  It is possible that Democrats will proceed with a tax that doesn’t contain a bond.  In that case they could go it alone and pass a gas tax with a simple majority in a special session or they could negotiate to back off some of the costly provisions of the legislation.

The Washington State Auditor has begun to release reports on the historic failure at Governor Inslee’s Employment Security Department. First reports reveal the problem was much larger than previously admitted by the Inslee team, with more than $1.1 billion dollars being either stolen, lost, or unaccounted for. What do you believe needs to occur to punish those responsible and to ensure it doesn’t happen again?

I’ve said since I first ran for office that single-party government is deeply corrosive and this scandal proves that.

Single party governments have immense incentives to ignore problems and failures and in a better functioning-government we might see Legislative investigations that were substantive but that won’t happen here.  The people of Washington will get accountable government when we are not a single party state and probably not before.

The Democrats pushed through a two-year patchwork plan following the Washington State Supreme Court’s Blake decision.  What do you see happening in two years as the legislature attempts to permanently fix the drug possession laws?

We don’t know.  Often an expiration can force further action but the influence of those who want complete decriminalization is very powerful and that may happen.  Most of us want to see the courts involved because we have observed people, sometimes family members, who were saved from addiction and death only because of court intervention and even incarceration.  We are appalled that these people may be left out because of this rapid political process.

We have just seen the most expensive legislative session on our state’s history that will negatively impact the personal finances of nearly all households, especially those who are lower income.  Do you expect there will be a revolt at the polls in 2022 or have the Democrats done a good enough job buying votes using taxpayers money?

I think we are all in the grip of history and we will see a turning point over the next 4 years.  We don’t know the direction yet, we just know what we feel.  I’m committed to fighting the 2022 elections as if everything depends on it and I began messaging, recruiting and fundraising the day after the end of the session.  I know many who feel exactly the same way.

CLICK HERE for more information about the House Republican Caucus