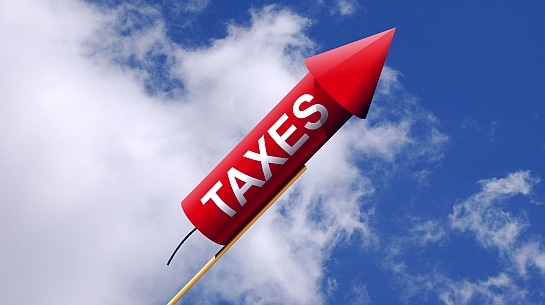 The Everett Herald, known for its Left-leaning editorial page since the days of Washington Post ownership, occasionally walks too far down the fake news path. In its latest mistake, the economically lost editorial board is now claiming that the union-funded, pro-tax, big government Institute on Taxation and Economy Policy (ITEP) is somehow a non-partisan organization whose economic pontifications should be accepted as gospel truth.

The ITEP, whose sole purpose is to cherry pick data to justify the goal of creating “equitable” (read “higher”)” tax systems, where Democrats get more money to spend on public employee unions, is used by the Herald editorial board to support its shallow argument for more taxes.

The ITEP advocates for tax increases across the board, claiming that Washington is the worst state in the nation for regressive taxes. Understand that regressive for Democrats means they want to tax rich non-Democrats some amount that is their “fair share”, though that “share”, and what it is a “fair” percentage of is never quite defined, or that an income tax on Washington State residents is not yet in place. Like a spoiled child, the ITEP is just upset that they have to work for their money, instead of relying on others to give them free stuff.

The Herald even accepts the comments of the state’s Tax Structure Group (TSG) as bipartisan. This is laughable as the group is completely staffed by “There is never a tax I didn’t love” lefties who are on Governor Jay Inslee’s hand-picked staff. Still, the Herald manages to support all the tax increases it favors without even batting a tax-laden eyelid.

The Herald’s favorite hits so far are tax credits for renters straight from the pockets of property owners, higher taxes on working people who drive to work, a job-destroying wealth tax (already voted down by Washington voters), and overturning the voter approved 1% cap per year on property tax increases.

The brazen lack of shame by the Herald board, ignoring the gigantic $8 billion-dollar cash surplus the state will bring in over the next two years, and yet still calling for more taxes, is stunning. Seattle Democrat Representative Noel Frame, co-chair of the TSG, is famous for her love for new and ever-increasing taxes (wealth Tax, income tax on capital gain, higher property taxes, more energy taxes, it’s all good for her), yet wants to see a bi-partisan process they can all agree on. But only as long as it involves increasing taxes.

Other members of the group are getting nervous (and they should be), as the Democrats’ starting position is that everyone who opposes new taxes are obstructionists. Rep. Frame wants everyone on the committee to be “deeply engaged” as they grapple with which taxes they want to raise. It won’t be long before the Democrats on the committee will be uttering the words equality, higher taxes and racist in the same sentence, if the Republicans don’t fall into line.

Back at the Herald editorial board they are lamenting the fact that a flat tax failed to garner any support at the TSG. Not surprisingly, the board also glossed over the results of a survey where the vast majority of respondents thought that the sales tax was a fair way of taxing people. Even more disturbing for the liberal mind is that people of color prefer sales taxes, even though that’s the very demographic that is always used by the liberals to justify more and different taxes.

Funny how that works. The people paying the taxes right now are now nearly as concerned as the liberals in Olympia who want to change things in the name of “equity”.

The TSG is due to publish its recommendations to the state legislature in 2023, and it is likely to be a doozie. Don’t panic though, the far-lefties won’t be alone as the Herald editorial board is likely to support all the new taxes with a passion.